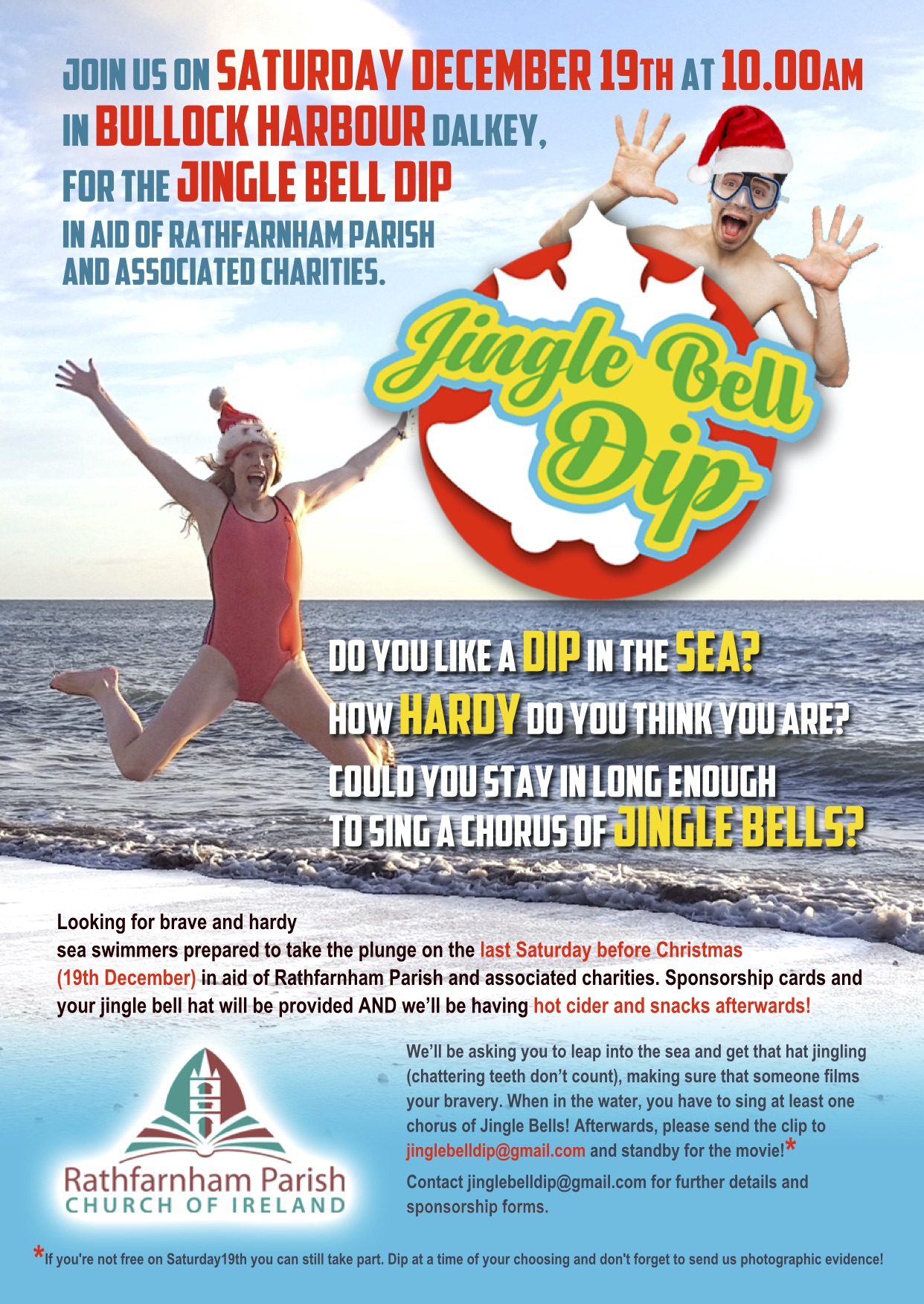 Rathfarnham Parishioners to Take the Plunge for Charity

Thirty hardy Rathfarnham parishioners will be braving the icy seas on Saturday December 19 to raise funds for the parish and the charities it supports. The Jingle Bell Dip will take place at Bullock Harbour at 10am on Saturday week and they would like to encourage others to join them on the last Saturday before Christmas.

Those who take the plunge must stay in the sea long enough to sing a chorus of Jingle Bells – chattering teeth don’t count. The parish will provide a jingle bell had and there will be hot cider and snacks to reward swimmers as they emerge from the water.

‘’This year, like many organisations, we have not been able to hold our usual fundraising events,” explains the Rector of Rathfarnham, Canon Adrienne Galligan. “However, the charities supported by the parish need funds more than ever. We are taking the plunge so that we can continue to donate to them. We’d love others to join us. All necessary safety measures will be in place on the day. For more information please contact Gill at jinglebelldip@gmail.com.’’

Among the charities supported by the parish are Focus Ireland and Mendicity, both of which work with people experiencing homelessness.

On the 3rd Sunday of Advent, December 13, on RTE One television at 11.10am Bishop Pat Storey celebrates a Eucharistic Service with a diverse group of Anglican women priests, in celebration of the 30th anniversary of women’s ordination in Ireland. Participants include the Very Revd Susan Green, the Ven Ruth Elmes, Canon Gillian Wharton, the Revd Nicola Halford, the Revd Cathy Hallissey, the Revd Katherine Poulton and the Rt Revd Michael Burrows. (RTÉ One with a transmission on RTÉ Radio 1 Extra/ LW252 at 11.00am) 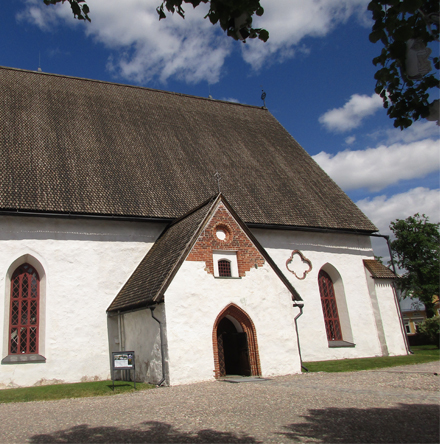 The Porvoo Declaration commits the Churches which have signed it ‘to share a common life’ and ‘to pray for and with one another’. An important way of doing this is to pray through the year for the Porvoo Churches and their dioceses. (Photo above – Porvoo Cathedral).

The Prayer Diary – which is now available here – is a list of Porvoo Communion dioceses or Churches covering each Sunday of the year, mindful of the many calls upon compilers of intercessions, and the environmental and production costs of printing a more elaborate list.

Those using the calendar are invited to choose one day each week on which they will pray for the Porvoo Churches. It is hoped that individuals and parishes, cathedrals and religious orders will make use of the Calendar in their own cycle of prayer week by week.

In addition to the Churches which have approved the Porvoo Declaration, we continue to pray for Churches with observer status. Observers attend all the meetings held under the Agreement.

The calendar may be freely copied or emailed for wider circulation. See –
[[] https://www.ireland.anglican.org/news/10265/porvoo-prayer-diary-for-2021 ] 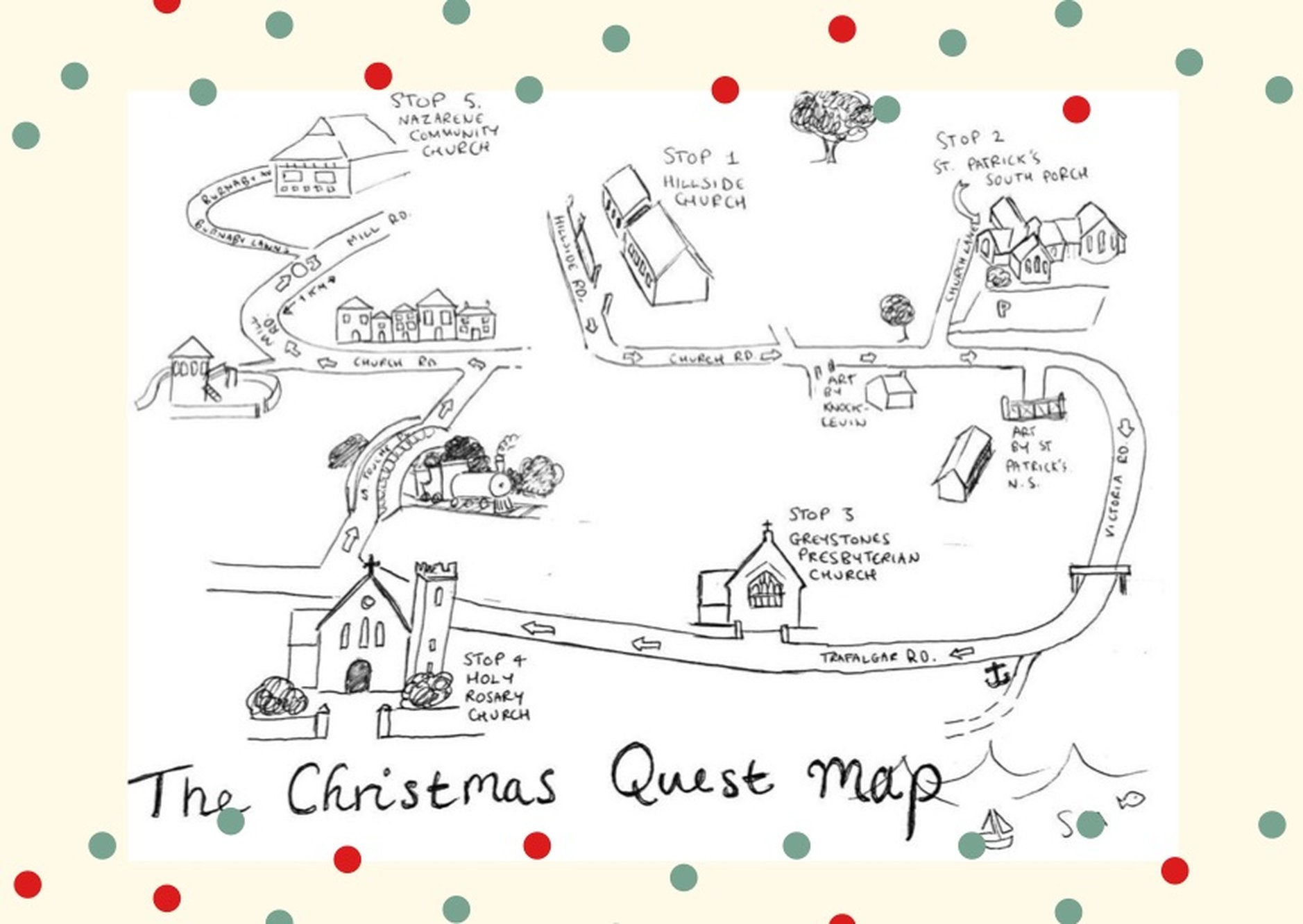 St Patrick’s Parish, Greystones, as part of Greystones Churches Together, is inviting people to join them in the Christmas Quest. The Greystones Churches Nativity Trail takes participants on a magical journey around Greystones to walk in the footsteps of Mary and Joseph, the shepherds and the wise men towards the stable in Bethlehem.

Suitable for all ages, St Patrick’s, Holy Rosary, Greystones Presbyterian Church, Hillside Evangelical Church and the Nazarene Church are hoping to bring the Christmas magic to their town in a new way this festive season.

They have set out a trail and participants follow the map to find clues at each station which will help break the hidden code and unlock the meaning of Christmas.

The walk will remain open throughout the Christmas season, with Christmas story dioramas at each church, artwork from local artists and schoolchildren and things to spot along the way. As you visit each station, you’ll discover the next chapter of the Christmas story and get another hint to help you solve the puzzle.
​
The route starts at Hillside Evangelical Church and finishes at the Nazarene Church and you can do the route in whole or in part or over several days.
​
Printed copies of the map will be available at the start of the route, in Hillside Evangelical Church. 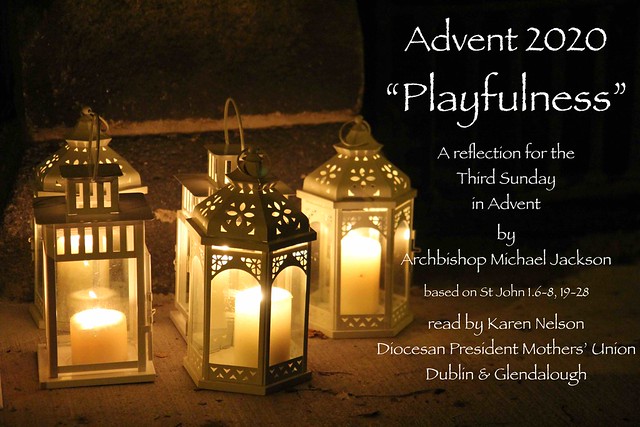 Watch – Playfulness: A Reflection for the Third Sunday in Advent by the Archbishop of Dublin

Archbishop Michael Jackson continues his video reflections for Advent this coming Sunday, 13th September. On the Third Sunday of Advent, his theme is ‘Playfulness’ based on the reading from St John 1.6–8, 19–28. This passage is read by Karen Nelson, Diocesan President, Mothers’ Union Dublin & Glendalough.

The reflections continue each Sunday in Advent and will conclude on Christmas Day. Subscribe to the Dublin & Glendalough YouTube channel so as not to miss them –
[[] https://www.youtube.com/channel/UCJQH1IpNHCI2ue7S782OlFw ]

The word domhnach is the oldest term in Irish for a church but had fallen out of use by the late seventh century when it was replaced by the element cill, which is found all over Ireland and is also attested in Scotland (e.g. Cill Mheàrnaig/Kilmarnock ‘Mernoc’s church’).

Domhnach, however, is restricted largely to parts of Ulster and Leinster and is found in names such as Domhnach Mór/Donaghmore ‘great church’ and Domhnach Cluana/Donaghcloney ‘church of the meadow’. The site of the medieval parish of Donaghcloney is located on the right bank of the river Lagan in Donaghcloney townland, but the church was relocated to Waringstown in the seventeenth century. Donaghcloney village is known locally as ‘The Cloney’.

With thanks to the Place-Name Project, Queen’s University (@placenamesni) 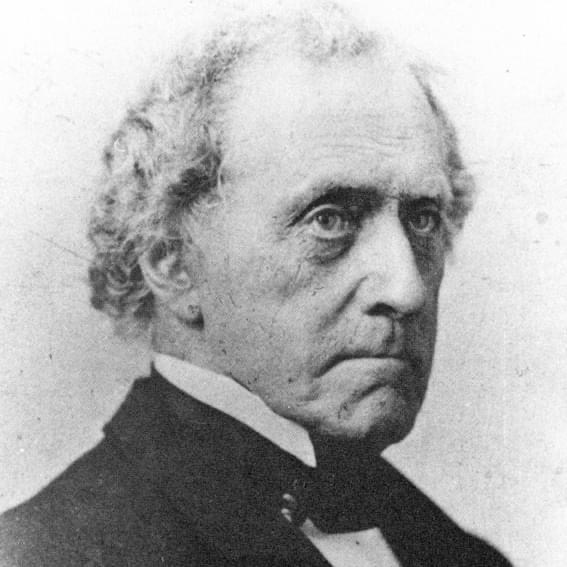 In 1828, James Gamble, born in Enniskillen, opened his own soap factory on Walnut Street, Cincinnati. He would soon join forces with William Procter, a candle maker, opening a new factory at Central Avenue and York Street in 1837. During the Civil War, the company would provide soap and candles to the Union Army, thus spreading the reputation of their products, and by the early 1880s Procter & Gamble had begun a nationwide advertising campaign.

James Gamble was born at the Graan near Enniskillen in County Fermanagh, Ireland and went to Portora Royal School. Gamble emigrated to America with his parents in 1819. He arrived in Cincinnati, Ohio on a flat boat down the Ohio River destined for Illinois. His family stopped in Cincinnati when he was seized with an illness. Staying in the city, his father established a nursery and Gamble apprenticed as a soap maker. He attended Kenyon College, graduated in 1824, and manufactured soap on his own in 1828.

Gamble went into business with William Procter after they became related by marriage. Gamble’s wife Elizabeth Ann Norris was the sister of Procter’s wife Olivia Norris. The pair’s father-in-law, Alexander Norris, first suggested that the two go into business together in 1837 and consequently Procter & Gamble was born. 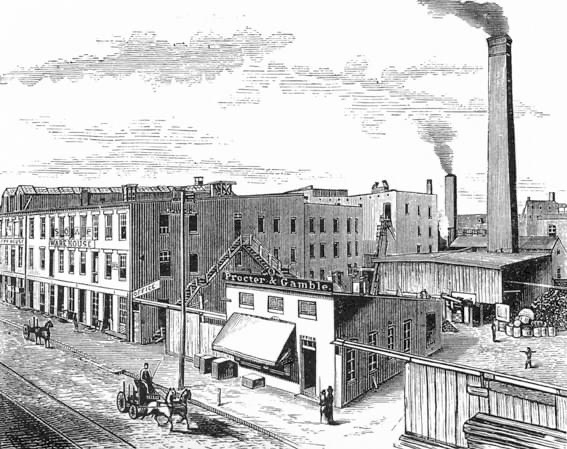 Gamble and Elizabeth Ann (Norris) Gamble had ten children, including James Norris Gamble who became Vice President of P&G and was the chemist who devised the formula for Ivory soap. Gamble’s grandson William married Franzeska Wilhelmina (Fanny) Nast, the daughter of the William Nast, a German-American Methodist preacher.

P&G pioneered several firsts:
They instituted a profit-sharing program that gave employees an ownership stake in the company. (1887)
Gamble’s son, James N. Gamble, helped create the first coordinated community campaign for charities. Known today as The United Way, it is now the leading community-based fundraiser in the United States. (1915)

Please pray for the meeting of the Church Leaders scheduled for the incoming week as the leaders try to co-ordinate a response to the continually changing legislation as it affects churches.

An advertisement about recruiting student deaconesses for the PCI has recently been circulated to ministers, and has been posted on the PCI website and PW Facebook page. Pray that the Lord would prompt suitably gifted women to explore serving him in this capacity.