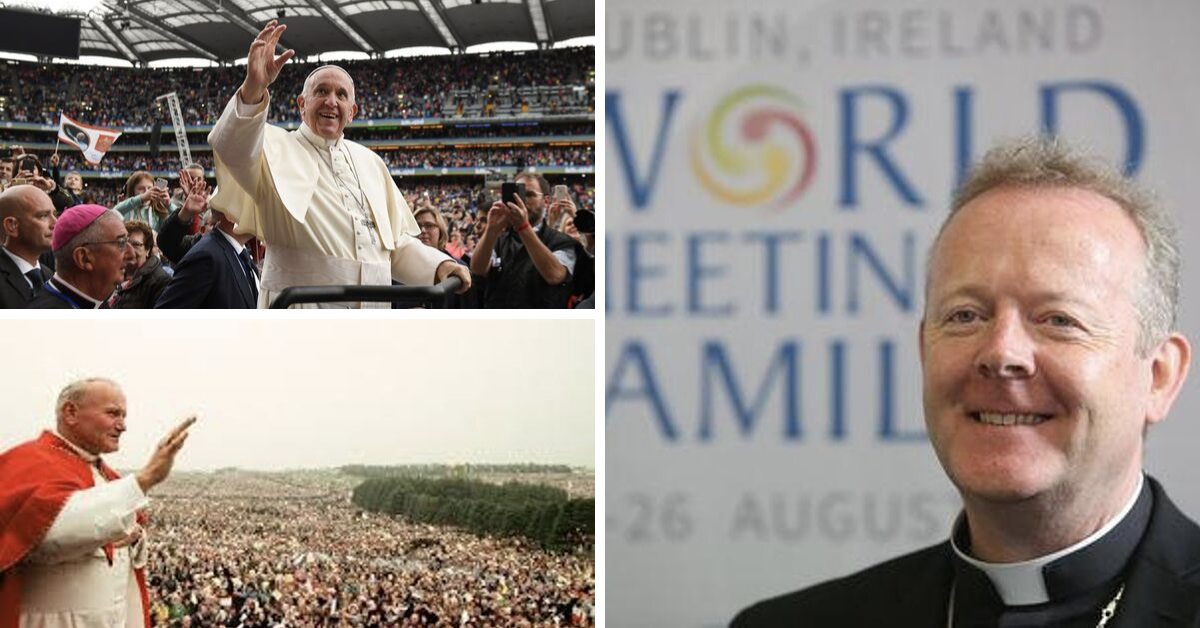 On Sunday 29 September, Archbishop Eamon Martin, Archbishop of Armagh led a special prayer service ‘For Ireland and Humanity’ at the Papal Cross near Drogheda, Co Louth.

I was only seventeen years old when I came here on this day in 1979 to see Pope John Paul II. His visit made a deep impression on me – and around that time I began to think seriously about becoming a priest.

It was a tense time on this island. In the three months leading up to the pope’s visit, 36 people were killed in the Troubles – including 16 Catholic and Protestant civilians.

Pope John Paul II said he was coming to Drogheda as “a pilgrim of peace”. Standing here, within sight of the Hill of Slane, and like St Patrick of old, Pope John Paul proclaimed Jesus as ‘the Hope and Future of all humanity’ and prayed: “May the light of Christ, the light of faith continue to always shine out from Ireland. May no darkness ever extinguish it”.

He also remembered St Oliver Plunkett, describing the Church in Ireland as a Church of martyrs; a Church of witnesses; a Church of heroic faith. He reaffirmed one of his key messages during that first year of his pontificate: “Each human being has inalienable rights that must be respected. Peace is threatened every time one of these rights is violated. The moral law, guardian of human rights, protector of the dignity of man, cannot be set aside by any person or group, or by the State itself, for any cause…The law of God stands in judgement over all reasons of State”.

And he spoke directly to politicians: “I urge you who are called to the noble vocation of politics to have the courage to face up to your responsibility, to be leaders in the cause of peace, reconciliation and justice”.

I distinctly remember having a lump in my throat when the Holy Father asked young people like me not to listen to voices which speak the language of hatred, revenge and retaliation, but to “love life, respect life”, in ourselves and in others. To those who were engaged in violence he spoke straight from the heart: “I appeal to you, in language of passionate pleading. On my knees I beg you to turn away from the paths of violence and to return to the ways of peace”.

Sadly, the violence in Ireland continued. Many more lives would be lost before the emergence of the Good Friday Agreement and a roadmap for lasting peace.

But as Pope St John Paul said himself that day: even if my voice is not listened to, “let history record that at a difficult moment in the experience of the people of Ireland, the Bishop of Rome set foot in your land; that he was with you and prayed with you for peace and reconciliation, for the victory of justice and love over hatred and violence”.

As we gather here today, forty years later, we are conscious of new threats to life, peace and reconciliation in our land. The last six months has seen a return to death and bombing in the North, with increased sectarianism and still no sign of a functioning Assembly to protect and develop the peace process. As Brexit looms, it seems at times that politics is descending into a dangerous factionalism which does nothing to solve the social and economic uncertainty of these days but only serves to erode the integrity of parliamentary democracy. On our streets, the brutal beating last week of Kevin Lunney, and the ongoing violent feuds between criminal gangs remind us that we must all work together to build a culture of life and prevent the culture of barbarism and death from taking root and poisoning our land.

Pope St John Paul II famously said that “every threat to human dignity and life must necessarily be felt in the heart of the Church” (Evangelium Vitae 3). That is why we must consistently highlight the fundamental right to life and always speak out against attacks on innocent human life.

It is shocking, for example, that the democratic process was so cynically manipulated in Westminster during the July holiday period to remove from law all explicit protections for unborn children in Northern Ireland up to 28 weeks in their mother’s womb.

Today I plead with political representatives to return to Stormont before the 21 October and end this barbaric abortion legislation. The political impasse has gone on too long. I say to them: For the sake of life; for the sake of peace – make the necessary compromises and return to your posts – this is a critical moment.

This week sees the beginning of the Extraordinary Month of Mission, when Catholics throughout the world are reminded that we are all “baptised and sent” to bring the joy and hope of the Gospel to everyone we meet. Just before he left Ireland in 1979 Pope St John Paul told the lay faithful of Ireland – you are “the salt of the earth; you are the light of the world”. You have a mission to insert the values of Christ into the reality of the world in which you live and to “permeate society”, from within, with the leaven of the Gospel.

The responsibility to build a culture of life therefore belongs to all of us. Today’s anniversary commits us to redoubling our efforts to build that culture of life in Ireland and to counter the language of hate, barriers, walls and separation with peacemaking, reconciliation, bridge-building and cooperation.

And we should not forget the power of prayer. I call on the people of Ireland, north and south, to pray for life, peace and reconciliation during October, especially on the weekend of 12-13 October (12 October marks the anniversary of the canonisation of St Oliver Plunkett, himself a patron of peace and reconciliation). Let us not forget the beautiful prayer of the Rosary which sustained the people of Ireland throughout many troubled times in the past.

To conclude I pray the words which Pope St John Paul prayed at the end of his address here in Drogheda forty years ago:

Christ, Prince of Peace ;
Mary, Mother of Peace, Queen of Ireland;
Saint Patrick, Saint Oliver, and all saints of Ireland;
I, together with all those gathered here and with all who join with me, invoke you :
Watch over Ireland. Protect humanity. Amen.