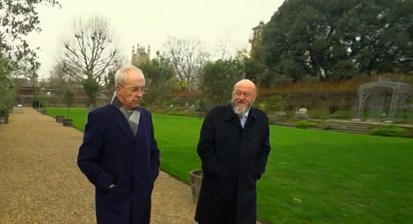 Be honest about your grief and your loss

Photo above – Archbishop Welby walks alongside the Chief Rabbi, Ephraim Mirvis, in the grounds of Lambeth Palace

The Archbishop of Canterbury and Britain’s Chief Rabbi have spoken of their shared experience of losing a child and being “caught by surprise” in grief.

The Most Rev Justin Welby lost seven-month-old Johanna in a car crash in 1983 while Ephraim Mirvis’s daughter, Liora, died of cancer in 2011 aged 30.

“There are days that are predictable. And then there are other days when suddenly something happens.

“It happened to me a couple of weeks ago, and I just suddenly thought, what would she be like?”

Rabbi Mirvis agreed, adding: “When one has suffered a deep loss, it’s with one for the rest of one’s life.

“And one thinks of the person every single day, and there is sadness.” But he cautioned that no two bereavements are the same. “If anybody comes along and says, ‘I know exactly what you’re going through’, they don’t. Because grief is something personal,” he said.

Discussing the impact of grief on Joe Biden, the US president-elect, who lost his first wife and daughter in a Christmas car crash in 1972, Mr Welby said: “It’s not that he became president despite or because of [his grief]. I think he will be a profoundly different president, because of his experience of grief, which is extraordinary”.

Reflecting on this virus year and the loss that many will be experiencing, he said: “I think for people around this country and with more than a million dead around the world this Christmas, there will be an empty chair.

“And it will be painful, deeply painful.

“I think I’d want to say, ‘Be kind to yourselves.’ Give yourself time.

“Talk about the person. Be honest about your grief and your loss, that you miss them. There’s no harm in tears.”

View the BBC programme at  –