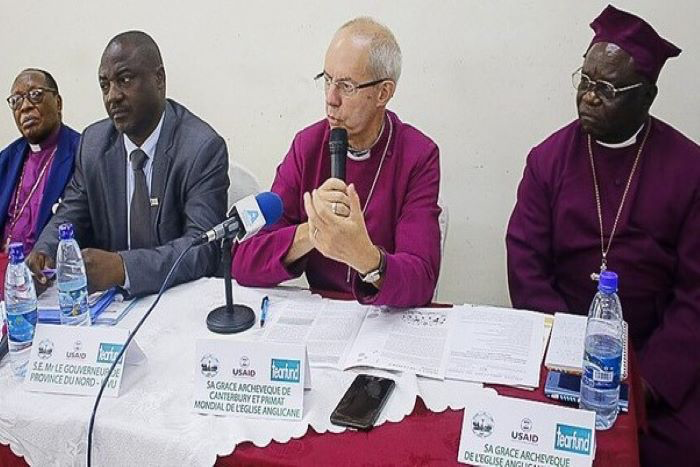 Two archbishops have backed new training for churches in the Democratic Republic of Congo, designed to help them tackle the Ebola epidemic which is devastating communities in the north east of the country.

Archbishop of the Congo and Bishop of Kindu, Masimango Katanda and the Archbishop of Canterbury, Justin Welby, opened a three-day workshop in Goma last week. Men and women of all ages and from different denominations across the country took part in the ‘Training of Trainers’ workshop using the newly revised manual ‘Faith in a time of Ebola’, which was supported by Tearfund and other Anglican partners. The manual, which the Anglican Alliance has helped develop, provides an illustrated, practical and Bible-based tool to resource church leaders.

Bishop Michael Beasley, an epidemiologist and one of the manual’s creators, attended the workshop. He said: “the workshop has enabled those taking part to think how to help the communities they serve to move from fear to hope, to join in efforts to prevent and manage infections, to communicate clearly and effectively about the epidemic and to support and care for those who have survived infection and to combat stigma. Planning is taking place to decide how best to roll out a faith-based approach to Ebola throughout the country.”

Last week the Archbishop of Canterbury visited Ebola treatment centres to hear first-hand from patients and staff about their experiences and to see the effectiveness of the medical interventions. He said, “I spoke with a boy of about 12 years, who is suspected to have the virus. He is waiting for a diagnosis. I said: ‘Are you afraid?’ He said: ‘No, I have strength.’ This is typical of the atmosphere at this treatment centre – strength, hope, resurrection. People must not be afraid to go there the moment they feel sick. As they will be respected, they will be helped by doctors, by psychologists, by everyone.”

Speaking on local radio, the Archbishop said it was important to break the stigma of Ebola and said: “The next challenge is how those who have been sick are going to be accepted.”

According to the Anglican Alliance’s Disaster Response and Resilience Manager, Dr Janice Proud, ‘Faith in a time of Ebola’ enables church leaders to talk about the facts of the Ebola epidemic and also about the issues and beliefs that are stopping people engaging with the prevention and treatment interventions.

She said: “We were glad to support the development of the Bible based Ebola resource and the training this week, ensuring that there was good ecumenical engagement. This was a key strength of the response in West Africa, all the denominations and faiths were speaking out together with the same message and doing so collaboratively.”

“In West Africa, the role of faith communities was critical to overcoming the epidemic,” said Dr Proud. “Only when faith communities, which actually understand the culture, got involved was it turned around.”

Over the last few months the manual has been trialled and reviewed by church leaders in DRC. It has now been revised in Swahili and translated into French and will be shared freely for local printing and use.

The manual has also been reviewed and approved by the London School of Hygiene and Tropical Medicine, whose director, Peter Piot, is the microbiologist who helped discover the Ebola virus in 1976.