Archbishops to ask Taoiseach to lift ban on public Masses 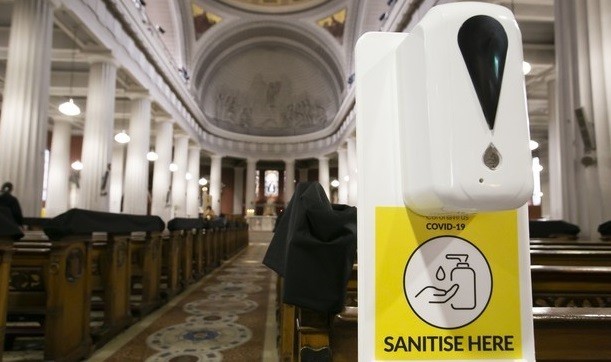 The four archbishops of the Irish Catholic church have requested a meeting with Taoiseach Micheál Martin in a bid to life the ban on people attending Mass under Level III coronavirus restrictions.

Countries with much more stringent guidelines currently in place have not banned public worship and the Republic remains the only place in Europe where Catholics cannot attend Mass due to state restrictions, Michael Kelly reports in The Irish Catholic.

Since churches were permitted to re-open in the Republic for Mass on June 29, parishioners have worked tirelessly to ensure protocols like sanitising and physical-distancing were rigidly adhered to. It was a body blow to congregations when public worship was banned under revised guidelines issued by the National Public Health Emergency Team (NPHET).

In a statement on Wednesday night, the hierarchy called on Catholics not to lose heart and said they would consider to impress upon the civil authorities the vital importance of attendance at Mass for Catholics.

The bishops said in their statement that while they fully support the guidance of the public health authorities, they wish to “engage constructively with the civil authorities” to ensure that people can continue to gather for Mass and the sacraments.

In their letter to Mr Martin, the four archbishops re-iterated the point insisting that Masses “are not simply ‘gatherings’ of people, but profound expressions of who we are as a Church.”

In June, The Irish Catholic reported on correspondence which revealed that the Archbishop of Dublin had warned then Taoiseach Leo Varadkar about increasing unhappiness about restrictions as churches re-opened in other parts of Europe.

In a note to Mr Varadkar on May 7 obtained under the Freedom of Information Act, Dr Martin referred to the fact that the Italian government had agreed for public Masses to begin after an agreement with Church leaders there.

“There is growing dissatisfaction in Catholic Church circles about postponing the generalised opening of churches until mid-July, without there having been an opportunity for the Church to present its position,” the archbishop wrote.

Dr Martin warned the Taoiseach the Government’s stance was causing anger and that “much of the discussion is taking on a rather nasty anti-government tone”.

He said that “this dissatisfaction is likely to grow now that an agreement has been made with the Italian government to permit opening [for Mass], under clear conditions, next week”.

Michael Kelly – is an award-winning writer and broadcaster specialising in religious and social affairs. Born and raised in Northern Ireland, he attended the Pontifical University St Patrick’s College, Maynooth where he obtained degrees in philosophy and theology and the Pontifical University of the Holy Cross in Rome where he studied social institutional communications.

From 2002-2005 he was an Editor in the Central Information Service of Vatican Radio. In this role, he travelled with Pope St John Paul II and Pope Benedict XVI on overseas trips. In 2005, he returned to Dublin to take up the position of Deputy Editor with The Irish Catholic newspaper, succeeding as Editor in 2012. In 2016, he was appointed Consulting Editor of Columba Books, the Dublin-based publisher of religious and spiritual books. He is a regular contributor to programmes on RTÉ, BBC, UTV, CNN and Al Jazeera.

He also has extensive experience offering media training and coaching in the voluntary sector.

He writes from Ireland for Catholic News Service of the United States Conference of Catholic Bishops. He is co-author with Austen Ivereigh of the best-selling book How to Defend the Faith Without Raising Your Voice. He is a frequent visitor to the Holy Land and is currently working on a new book on the holy places in the Holy Land which is due to be published in Autumn 2019.