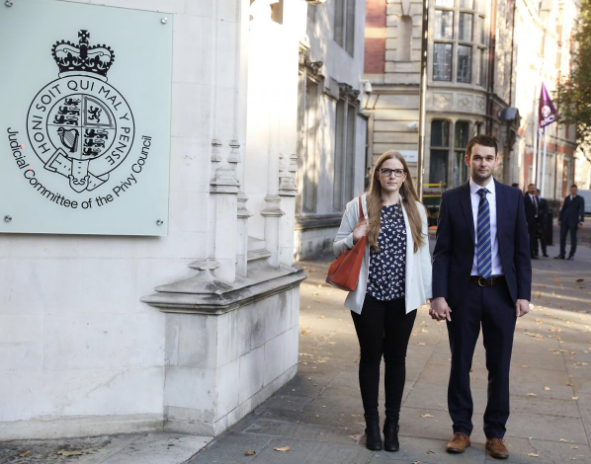 A Christian-owned bakery in Belfast will most likely find itself in court again as a result of a legal challenge to the UK Supreme Court’s ruling that it did not discriminate against a gay customer by refusing his cake order.

Photo above – Daniel and Amy McArthur, who own Ashers Bakery in Belfast, arrive at the Supreme Court in London, October 10, 2018

The case goes back to 2014 when Gareth Lee tried to order a cake with a pro-gay marriage message. The cake was for a campaign event calling for the introduction of same-sex marriage to Northern Ireland and was to feature the logo of the Belfast-based campaign group, QueerSpace.

The order was turned down because the messaging of the cake conflicted with the beliefs of Ashers’ Christian owners, the McArthur family.

Mr Lee claimed discrimination and the courts found in his favour when the Equality Commission took legal action.

The verdict was then upheld by the Court of Appeal before a surprise ruling last year by the UK Supreme Court determined that the owners of Ashers had been within their rights to refuse a cake order because of objections to the messaging.

The Supreme Court concluded that people should not be compelled to express a view they do not agree with. Crucially, it ruled that the objection of the bakers had been to promoting a message they did not agree with and not to the customer’s sexual orientation.

Now Mr Lee is challenging the Supreme Court judgement by launching an appeal with the European Court of Human Rights.

Phoenix Law, which is representing Mr Lee, told The Belfast Telegraph: “One of the main arguments is: We challenge the concept that a business can have religious beliefs.

“Its owners may, but businesses, brands and companies are separate from their owners and their personal and private views.”

The Christian Institute, which has supported the McArthur family throughout, called the latest legal challenge an attack on freedom of expression and belief that must be “robustly opposed”.

Colin Hart, Director of The Christian Institute, said: “If it is wrong to compel an individual baker to say something they do not believe, it is just as wrong to compel a small family bakery. People don’t relinquish fundamental freedoms just because they set up a family company.”

Simon Calvert, Deputy Director of The Christian Institute, commented: “The ruling by five of the country’s most distinguished and experienced judges was welcomed by lawyers, commentators, free speech experts, and human rights campaigners like Peter Tatchell.

“They all knew of the implications to freedom of speech and religion had the decision gone against the Ashers bakery, which could have included a Muslim printer being forced to print cartoons of Mohammed, or a bakery owned by a lesbian couple being forced to make a cake describing gay marriage as an ‘abomination’.”

He added: “I’m surprised and a little disappointed that anyone would want to overturn a ruling that protects gay business owners from being forced to promote views they don’t share, just as much as it protects Christian business owners and hope the Government will robustly defend the current law.”