BBC Television – Programmes on the Holocaust 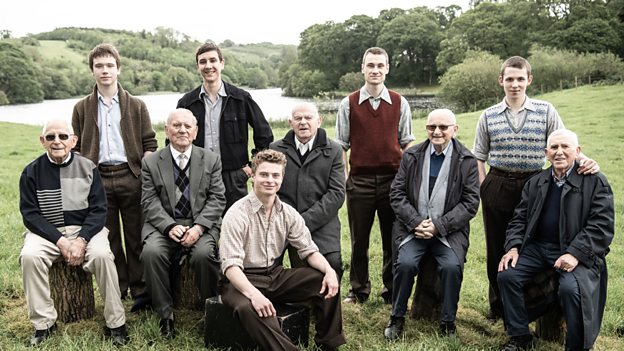 The ‘Windermere Boys” came to the Lake District after being liberated from concentration camps. The Windermere Children: In Their Own Words – Sir Ben Helfgott, Marek Wrobelewski, Sam Laskier, Kuba Sprenger, Ike Alterman. (See item below)

My Family, The Holocaust and Me (BBC One)

In this moving new two-part series, Robert Rinder helps second and third generations of families who experienced the Holocaust to retrace their relatives’ footsteps and discover the full truth about what happened to them. Robert also explores further his own family’s Holocaust stories, on both his mum’s and his dad’s sides.

This series reveals what it means to be the children and grandchildren of Holocaust victims and survivors. Robert meets three different British Jewish families who have been affected by the Holocaust: a man who wants to know what happened to his German grandparents and uncle; two sisters who investigate their grandmother’s role in the Dutch resistance and the fate of her sister; and a daughter who knows her mother was arrested as a child by the Nazis as she tried to flee France.

Robert also embarks on his own journeys of discovery. To find out what happened to his paternal family, he travels to Lithuania and hears a harrowing eye-witness account. Robert also travels with his mother Angela to Treblinka, to meet the last remaining survivor of the former Nazi death camp and to commemorate his great-grandfather and his family.

August, 1945. A coachload of children arrive at the Calgarth Estate by Lake Windermere, England. They are child survivors of the Nazi Holocaust that has devastated Europe’s Jewish population. Carrying only the clothes they wear and a few meagre possessions, they bear the emotional and physical scars of all they have suffered.

From Bafta-nominated screenwriter Simon Block and Bafta and Emmy-winning director Michael Samuels, The Windermere Children is the first dramatisation of a remarkable true story about hope in the aftermath of the Holocaust, based on the powerful first-person testimony of survivors who began their new lives in the UK.

The drama is led by a stellar cast including Thomas Kretschmann (The Pianist), Romola Garai (The Miniaturist), Tim McInnerny (Strangers) and Iain Glen (Game Of Thrones).

Charged with looking after the children is child psychologist Oscar Friedmann (Kretschmann). Along with his team of counsellors, including art therapist Marie Paneth (Garai), philanthropist Leonard Montefiore (McInnerny) and sports coach Jock Lawrence (Glen), they have four months to help the children reclaim their lives.

By the lake, the children learn English, play football, ride bikes, express their trauma through painting – and begin to heal. some locals taunt them, but they are embraced by others. Haunted by nightmares, they yearn for news of their loved ones. When the red cross arrives with letters about the fates of their families, none of them receive good news. But in the absence of relatives, the children find family in each other.

The Windermere Children is the stark, moving and ultimately redemptive story of the bonds the children make with one another, and of how the friendships forged at Windermere sustain them as they rebuild their lives in the UK.

The Holocaust is one of the most documented, witnessed and written about events in history, so why is Holocaust denial back on the political agenda? What has happened in the 75 years since the liberation of the camps to have so skewed the picture? And, if it matters, why does it matter?

In this timely and important film, Confronting Holocaust Denial With David Baddiel, for BBC Two, David (pictured, top of page) investigates the history and modern face of Holocaust denial. He talks to academics and historians to trace how denial has evolved since the end of the Second World War and try to discover how and why people are still denying the Holocaust today.

Over the course of the film David encounters people who cause him to question deep-rooted opinions, others who lend extra weight to beliefs he’s grown up with from childhood – and some he really would rather not meet at all. He broaches taboos and finds himself in often uncomfortable situations. At the heart of the film are his attempts to answer some fundamental questions: why does a desire to deny the events of the Holocaust even exist? Why is it growing? What does it tell us about anti-Semitism? Is there a version of Holocaust Denial that is becoming respectable? And how can we best counter these ideas?

Finally he emerges with a new perspective on an issue that goes beyond the events of the Holocaust, and sheds light on a very 21st century malaise – the denial of historical fact. For many, even to explore the phenomenon of Holocaust Denial is to unlock a box marked ‘do not open’. But this film suggests that exploring this archetype of lies, conspiracy theory and fake news could deepen our understanding of our post-truth world.

Belsen: Our Story is a one-hour documentary film telling the untold story of the infamous Bergen-Belsen concentration camp where over 50,000 people, mostly Jews, died primarily from starvation and disease in the last phase of World War II.

As the Allied troops advanced into Germany through the winter of 1944, thousands of Jewish prisoners were evacuated from camps near the Eastern front, mostly through brutal forced marches. Bergen-Belsen’s population increased eight-fold to nearly 60,000. But unlike the infamous extermination or death camps such as Auschwitz or Treblinka, Belsen wasn’t designed as a place of killing. It had no gas chambers. Instead, the prisoners were slaughtered by systematic neglect – many starved to death, others succumbed to typhus, tuberculosis, typhoid fever or dysentery, diseases which ravaged the camp, fostered by the lack of clean drinking water and minimal sanitation.

All that remains of Belsen today is a peaceful, grassy meadow, but it’s legacy lives on through the recollections of those who survived it. Belsen: Our Story is their story. Featuring powerful new interviews with some of the last remaining survivors of the Holocaust and dramatic reconstructions, it also includes archive of the British liberation. Those liberators recount the moment they stumbled into the horror of Belsen, the piles of unburied bodies, the epidemics of disease, such the British army felt they had no choice but to burn Bergen Belsen to the ground – inadvertently reducing much of the evidence of the Nazis crimes to ashes. The oral histories of Belsen: Our Story ensures that story is not forgotten.

The Windermere Children: In Their Own Words (BBC Four)

The Windermere Children: In Their Own Wordstells the story of the pioneering project to rehabilitate child survivors of the Holocaust on the shores of Lake Windermere.

In the year that marks the 75th anniversary of the end of World War II and the Holocaust, this powerful documentary reveals a little-known story of 300 young orphaned Jewish refugees who began new lives in England’s Lake District in the summer of 1945. The documentary accompanies the BBC Two drama, The Windermere Children.
With compelling first-hand testimony from some of the last living Holocaust survivors, this film explores an extraordinary success story that emerged from the darkest of times, all beginning with the arrival of ten Stirling bombers carrying the 300 children from Prague to Carlisle on 14 August 1945.

The survivor interviews include extraordinary first-hand accounts of both their wartime experiences, separation from families and the horrors they experienced, but also their wonder at arriving in Britain and their lives thereafter.

With powerful contemporary resonance, the film will reveal that many of the 300 who arrived as bewildered young refugees without a word of English or many possessions, and went on to forge successful lives in Britain, starting families of their own and giving back to the country that welcomed them in extraordinary ways.