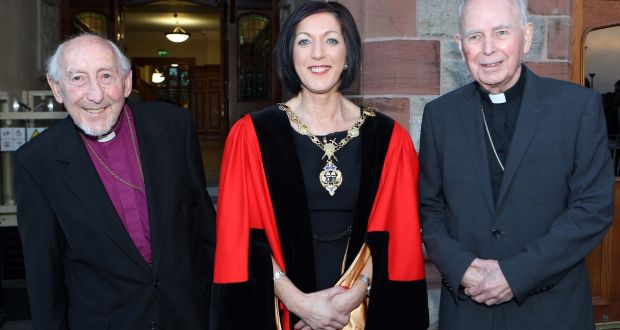 Then mayor of Derry, Brenda Stevenson, welcomes Dr James Mehaffey (left), retired Church of Ireland bishop of Derry and Raphoe, and Dr Edward Daly, retired Catholic bishop of Derry, to the Guildhall in March 2015 to receive the Freedom of the City of Derry for their cross-community leadership during the Troubles. File photograph: Lorcan Doherty Photography

He paid tribute to a “man of tremendous pastoral ministry”… Bishop Mehaffey was “a man of great hope”.

“He is going to be missed. Not only was our friendship deep and lasting, he was a true Anglican in the sense of what it meant to be a reformed, yet catholic, bishop.

“His ministry in Derry during dark days was greatly admired.”

Last May, a Service of Thanksgiving was held in St Columb’s Cathedral in Londonderry to mark the 65th anniversary of the bishop’s ordination.

Former Church of Ireland Bishop of Derry Dr James Mehaffey, whose friendship with his Catholic counterpart became a symbol of hope during some of the darkest days of the Troubles, has died.

Bishop Mehaffey died at home on Monday surrounded by his family. Aged 88, he had been ill for some time.

SDLP leader Colum Eastwood said Bishop Mehaffey’s ministry was “a constant source of hope during the darkest days of conflict”.

“The defining friendship between Bishop Mehaffey and Bishop Daly, two people from different traditions who saw the best in each other and in our communities, was an enduring symbol of the power of partnership and reconciliation to shape lasting change,” he said.

Extending his sympathies to Bishop Mehaffey’s family, Mr Eastwood said he hoped “they are comforted by the pride that this city takes in James’s memory”.

Sinn Féin MEP Martina Anderson said Derry had “lost a champion of all of us, a decent human being who was respected by all who had the pleasure of meeting him”.

Originally from Portadown in Co Armagh, Bishop Mehaffey was Bishop of Derry and Raphoe from 1980 until his retirement in 2002.

He developed a close friendship with Catholic Bishop of Derry Dr Edward Daly, and worked together to foster reconciliation and build peace.

In 2015 they were jointly awarded Freedom of the City of Derry for their cross-community leadership during the Troubles.

The two bishops were co-founders of the Inner City Trust, which worked to rebuild Derry’s bomb-damaged city centre.

Bishop Mehaffey officiated at many funerals of parishioners who had lost their lives in the Troubles, including members of the RUC and UDR, and was, the Church of Ireland said, “a trenchant opponent of the use of violence for political ends, a tireless advocate for reconciliation in Northern Ireland and a staunch supporter of the peace process”.

‘Part of the solution’

“During the worst of times in our history, when Churches were often being depicted as part of the problem in Northern Ireland, Bishop James and Bishop Edward became part of the solution,” he said.

“The seeds of reconciliation they helped sow eventually brought forth a rich fruit. The two bishops’ example – their joint example – of Christian witness, was and continues to be an inspiration to those of us who follow in their footsteps.”

Catholic primate of All Ireland Archbishop Eamon Martin offered “thanks for his warmth and kindness and the powerful and courageous witness of his co-operation and rapport with Bishop Daly during troubled times”.

“The bridges they build together have made a real difference,” he said.

“By their faith-filled example and courage, they laid foundations of trust, respect and dialogue on which the current generation has been able to build. They helped us develop a shared narrative about our chequered past – and that is a key part of constructing a shared future,” he said.

Bishop Mehaffey is survived by his wife Thelma and by their children Wendy and Tim. He was pre-deceased by their son Philip.

It is expected that a service of thanksgiving for Bishop Mehaffey’s life will take place in St Columb’s Cathedral in Derry later this week.