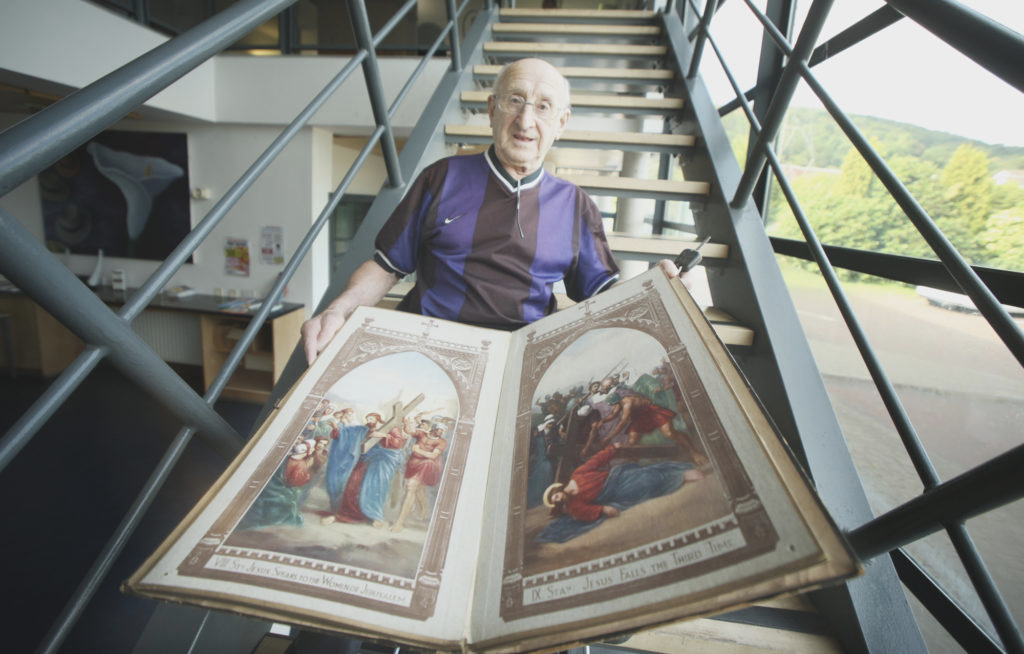 A Clonard, Belfast, parishioner has rediscovered a fascinating book of religious art that dates to the early 1930s.

85-year-old Fred Brady (photo above) bought the dusty tome from a market in Kildare over 40-years ago, and it had lain forgotten in his attic for decades.

Published in 1933 by the now seemingly defunct Catholic Picture Company of Ireland, the book includes high-quality prints of the Stations of the Cross, which depict the crucifixion of Jesus Christ.

While largely an artistic work, the book offers some detail of its publication. The book states that “being the nineteenth century of the Redemption of mankind” the then Pope, Pius XI, had proclaimed 1933 a “Holy Year”.

“These facts have prompted the publishers to devise and reproduce this beautiful and artistic Album containing the fourteen ‘Stations of the Cross’,” it states.

“The primary purpose of the work of Irish Art is to provide a most appropriate and lasting souvenir for the Catholic home, in honour and commemoration of Holy Year.”

It also reveals that the artworks are “exact replicas of the celebrated and valuable set in the Church of Mount Alphonsus, Limerick”, which belonged to the Redemptorist Fathers, who gave permission for their reproduction.

According to the Redemptorists in Limerick, the Stations of the Cross in their church date back to 1866 – just four years after the church was officially completed.

Explaining his find, Fred said: “I bought it in a massive market in Kildare. I’m 85 now, so I would say it was about 40 years ago, maybe more.

“I liked it because it was the Stations of the Cross and I thought it maybe would be worth a few bob in a lot of years’ time, but I never tried to sell it or do anything with it. It was exactly like that when I bought it so it was a good few years old then.

“I just found it up in the attic of the house. I was clearing the attic out because we’re changing over from oil to gas and I came across it again.”

He continued: “I just want to see what’s what with it. I thought back then that it was an oddball of a thing to be getting sold. The only person I took it to was Father Hanna down in Clonard Monastery last week. He looked at it and said it was very, very good, it’s very nice, but he couldn’t give me an opinion of where to go to see about it. Then somebody told me to bring it up to the Andytown News.”

He added: “If it turns out to be stolen or anything then I would give it back to whoever owned it, but I don’t think it is.”

If you have any further clues or information about the book or its contents, please contact the Andersonstown News.

By Michael Jackson in the Andersonstown News