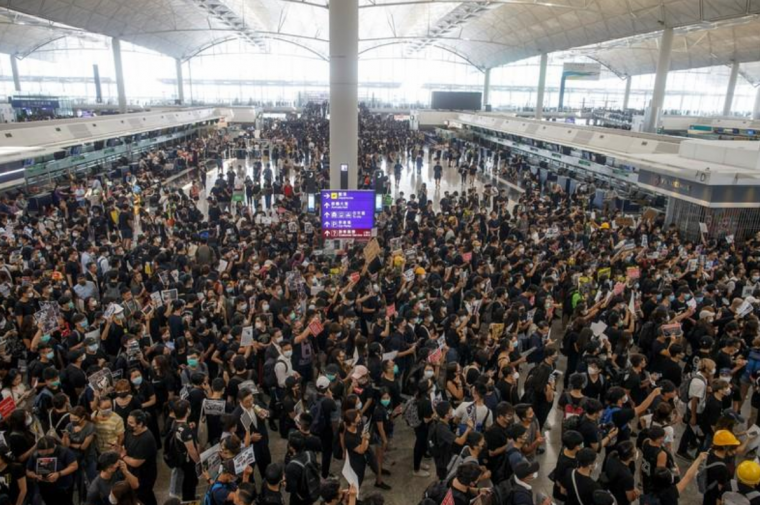 Christians in Hong Kong are continuing to pray for a peaceful resolution to the social and political crisis as weeks of protests show no sign of abating.

Bishops in the Anglican Diocese of Hong Kong have said that the tensions permeating the city are causing “anxiety and pain” for citizens, and have voiced concerns that the clashes between police and civilians are only growing “more acute”.

In a letter to parishioners, Archbishop Paul Kwong, Bishop Andrew Chan and Bishop Timothy Kwok quoted Matthew 5:43 as they urged Christians to pray for their enemies and not respond to the current situation with hatred.

“We think that when Christians respond to political or public issues, we should remember that we are all members of God’s family, even if we hold different opinions,” they wrote.

“We might stand on opposite sides, and feel animosity or even hatred towards those with different views.

“When this happens, we have to be extremely careful, because our hearts might have fallen into the control of the ‘evil one’.

“We need to remember that benevolent thoughts come from God while wicked intentions originate in the ‘evil one’, Satan. In these times, we all need to pray to God for mercy and forgive one another.”

They went on to say that in the face of the ongoing divisions, people from both sides “need to respect the other party, listen, communicate and build mutual trust”.

They said it was important that the people of Hong Kong, and especially the city’s Christians, resist taking a “confrontational” approach.

“If the Church, too, takes this approach, how are we different from the rest of the world? We are one family, can we try to stand in each other’s shoes and understand one another’s position?” they said.

They concluded their letter with an appeal for kindness instead of animosity.

“The manner of expression is also an important issue. Sometimes, an expression of kindness can open up a new horizon while responses born of animosity only lead to both parties ignoring the others’ demands and opinions,” they said.

The Hong Kong Christian Council said it was praying for peace to return to the city.

“The violence is surely escalating, and we do pray that everyone should treasure life and refrain from doing anything that might harm oneself or others,” it told Christian Today.

“Please pray that there can be a peaceful resolution to the political and social crisis now in Hong Kong.”

It added, “We ask God for wisdom, humility and courage for the people of Hong Kong, the government leaders, and the Church.”

There were clashes again between police and protesters on Sunday as protests ran into their 10th weekend. Footage shared to social media showed police firing non-lethal bullets and teargas at protesters inside train stations. Some people were beaten by police with batons.

In Wan Chai district, petrol bombs and bricks were thrown at police who then responded by charging at the protesters.

The Chinese authorities have responded by scaling up their rhetoric, denouncing the protests as an act of “terrorism”.

“This wantonly tramples on Hong Kong’s rule of law and social order.”

Last Thursday, around 1,200 Catholics turned out for a candlelight vigil calling for the full withdrawal of the controversial extradition bill that triggered the protests two months ago.

Hong Kong Chief Executive Carrie Lam has called the bill “dead” but has stopped short of withdrawing it completely from the legislative agenda – a key demand of the protesters.

The vigil, held in front of the Cathedral of the Immaculate Conception, also called for greater accountability in the Hong Kong legislature and the creation of an independent committee to investigate the police response to the protests.

In an address at the vigil, Auxiliary Bishop Joseph Ha Chi-shing said the blame for the protests lay with the Hong Kong government but he also pleaded for protesters to resist violence and called for a “cooldown period”.

“In the past two months, we have really experienced the limit of humanity and we should pray,” he told them.

“Violence will only create more violence. Hatred will only produce more hatred. Injustice will never achieve justice. History will prove that only peace and reason can establish a long-term peace.”

The Vine Church, an international congregation in Hong Kong, has been offering trauma counselling for locals affected by the ongoing protests.

Last week, it voiced concern in a letter to members of the congregation that the protests had “polarised” relationships between people in the community and in families.

It urged church members to continue in love in spite of their differing political positions and suggested that they “gently disengage from escalating conversations”.

“Recently, many of us have seen our families, friendships, and communities become polarised because of our differing political positions,” the church wrote.

“This is especially difficult when this happens in our families or with people close to us. As much as we desire immediate resolutions and reconciliation, it often isn’t possible nor realistic.

“Yet if we don’t find healthy ways to navigate the divisions, they will remain and our relationships will suffer because of it.

“And so we must learn to work through our differences, learning to love despite our lack of agreement, which is something that takes time and effort to address but is so very worth it.”

It added: “Accept that you won’t agree all the time. Agreement is not a requirement for love, friendship, or community. The truth is, we all disagree. Yet we can find ways to love one another in the midst of that difference.”