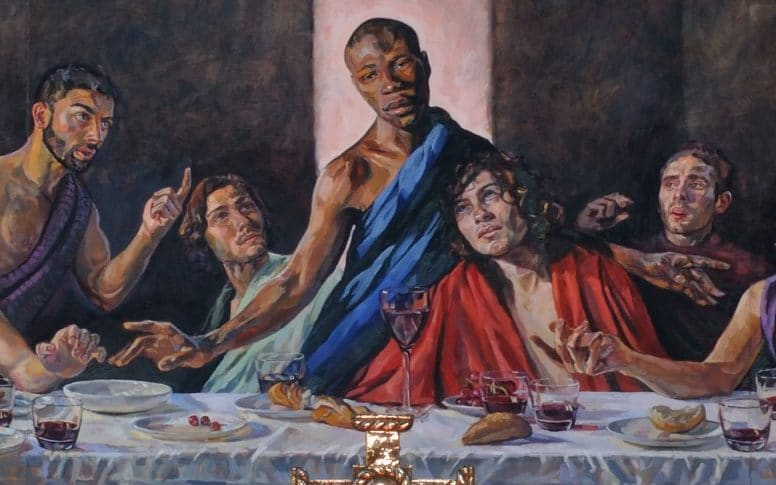 A cathedral in England has placed a painting of the Last Supper featuring a black Jesus above its altar in a show of support for the Black Lives Matter movement.

“The Church is not in a strong position to preach to others about justice, racial or otherwise,” John said.

“But our faith teaches that we are all made equally in the image of God, and that God is of justice.

“Black lives matter, so this is why we have turned our Altar of the Persecuted into a space for reflection and prayer with [the artwork] at the heart.”

The announcement came less than a week after the Archbishop of Canterbury Justin Welby encouraged the Church of England to reconsider how the ethnicity of Jesus is portrayed.

Welby also said that Christians should accommodate global depictions of Jesus, which portray him as different races all over the world including black, Chinese and Middle Eastern.

The artist behind the painting, Lorna May Wadsworth, admitted to basing her portrayal of Jesus around Jamaican-born model Tafari Hinds.

“Experts agree [Jesus] would most likely have had Middle Eastern features, yet for centuries European artists have traditionally painted Christ in their own image,” she said.

“I cast Tafari Hinds as my Jesus to make people question the Western myth that he had fair hair and blue eyes.

“My portrayal of him is just as ‘accurate’ as the received idea that he looked like a Florentine.”

In the wake of the Black Lives Matter movement, pressure has been mounting for establishments, businesses and states to reconsider symbols of ‘white supremacy’, and some have claimed that Jesus’ depiction as a white man from Europe is an example of that.

St Albans Cathedral is one of the UK’s oldest, dating back to the 8th Century.