Catholic church praises C of I neighbour for hosting services 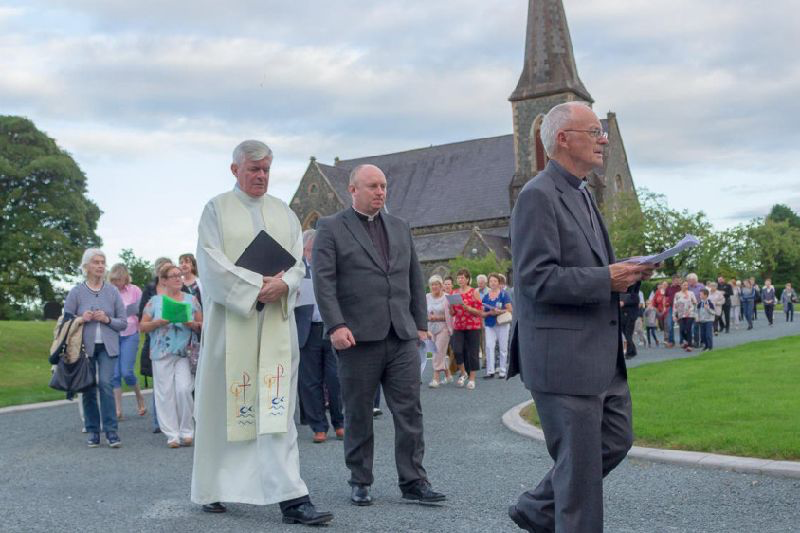 Fr Pat McHugh and Rev Neal Phair walking side by side down the avenue of St Maeldoids Church of Ireland Church in Monaghan along with parishioners from both churches.

A Catholic church in Co Monaghan has paid tribute to its Church of Ireland neighbours, who accommodated all their services for a over a year during renovations, Philip Bradfield reports in the News Letter.

St Mary’s Church in Castleblaney is to be officially reopened this Sunday after a year’s renovation work. But while it was closed the adjacent Church of Ireland congregation at St Maeldoid’s Church gave them full use of their building.

Church of Ireland minister Rev Neal Phair said the arrangement came about after Parish Priest Pat McHugh mentioned his church was to be closed for repairs.

“So I offered them our church for a year,” he told the News Letter. “We were only 50 yards apart. We had mass in our church every day and a Catholic funeral almost every day. It is a very big parish. We also had a lot of weddings. I used to get letters all the time from Catholic couples thanking us for letting them use it. Hundreds wrote to us. Some were even sending money and we were sending it back again.

“It was quite amazing. Alot of the Catholic parishioners had never set foot in our church and they were all saying how beautiful it was.”

He noted that the Catholic parish takes in members from Crossmaglen, Culloville and Castleblaney.

“It is a border area and there is always work to be done in reconciliation. So I believe this sowed seeds for reconciliation and tolerance.”

The Catholic Diocese of Clogher said that a notable aspect of the renovation was that the Catholic community was “generously and willingly accommodated by the Church of Ireland community next door in St Maeldoid’s Church.

“This was due to the kind offer of the then Rector, Rev Neal Phair and the Select Vestry, together with the agreement of Bishop John McDowell and Bishop Liam MacDaid.”