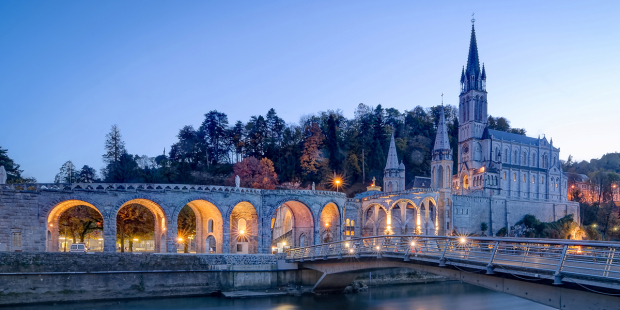 An impossible year for religious tourism

Photo – Lourdes – closure left it with a deficit of $9.06 million

For most people, checking off items on one’s list of places to go has been put on hold, due to the COVID-19 pandemic.

And many of those pilgrimage sites are in need of the very thing people go there for — prayer.

The year 2020 has been an impossible year for “religious tourism,” says an article at The Conversation website. There’s been nowhere near the roughly 300 million to 330 million pilgrims who visit the world’s key religious sites every year, the Conversation said. And local economies are suffering due to the downturn. Worldwide, pilgrims generate about $18 billion in revenues.

In Jerusalem, for example, the world’s primary pilgrimage site, where Jesus Christ was crucified and rose from the dead, had to be completely closed for two months due to the pandemic. When it reopened in May, authorities limited entrance to 50 persons at a time.

But Franciscan Father Francesco Patton, custos of the Holy Land, told the Vatican newspaper, L’Osservatore Romano, “In Jerusalem, we haven’t seen a pilgrim in six months.”

Speaking this week, he appealed to Catholics around the world to be as generous as they can to the special collection for the Holy Land, which will be taken up on Sunday, September 13. It was moved from Good Friday this year because of pandemic closures and shutdowns.

In Portugal, the shrine at Fatima was also closed, interrupting the annual May 13 feast day, the anniversary of the first apparition of the Virgin Mary to three children in 1917.

“We’ve come to a complete standstill,” Daniela Tome, head of Magnificat Tours, which specialises in visits to Fatima, told the German news agency Deutsche Welle. She was forced to cut working hours for her staff and cancel contracts with freelance guides.

Tome told DW that the income she expected from the May 13 festival “all but collapsed.”

With the release of the movie “Fatima,” though, and depending on how the pandemic plays out, pilgrimages to the Portuguese shrine might rebound next year.

Similarly, Lourdes in France normally welcomes up to 5 million visitors a year. With the shutdown in France, pilgrims could at least go online and view the sanctuary, but Lourdes’ closure left it with a deficit of $9.06 million, the Conversation said.

In light of all this, some people have gotten creative. Modern Catholic Pilgrim (MCP) recently announced a project meant to encourage devotion to Catholic saints during this time of social distancing. Walking with the Saints 2020 is meant to get those who “long to go on pilgrimage” out of the house on isolated “walked pilgrimages” dedicated to their favourite saints. The month-long event will culminate in a celebration of All Saints Day on November 1.