The Prince of Wales has denounced the Easter suicide bombings in Sri Lanka as an “utterly barbaric attack”, as he attended a Tamil Christian church service.

Charles told the congregation the terrorist atrocities, which claimed the lives of more than 250 people when churches and hotels were targeted in April, were “an assault on religious freedom everywhere”.

Among the worshippers in the east London church were those who lost family and friends in the attacks, and the prince said seeing people from different backgrounds grieving together gave him “confidence that compassion and community will always prevail”.

Charles had travelled to the Emmanuel Christian Fellowship, a Tamil Christian church established in 1982 in Manor Park, to express his solidarity with the worshippers during an advent service.

He said: “I’ve come here to stand with this community in remembrance of all those who were killed or whose lives were changed forever in the utterly barbaric attack on churches in Sri Lanka this past Easter day.

Charles, who at the time of the attacks sent a message of condolence to the Sri Lankan president, went on to say: “The appalling loss of life made Sunday the 21st of April the single worst day of violence targeting Christians in the modern era.

“There are no words that can heal the wounds that you and your fellow Christians have endured, but I did so want you all to know just how much I, and so many people in this country, mind about what you’ve suffered and how much we have been thinking of you all.

“The attacks at Saint Anthony’s Shrine, Colombo, Saint Sebastian’s Church, Negombo and the Zion Church, Batticaloa, were an assault on religious freedom everywhere and against all of us who prize tolerance over division, and love over hate.” 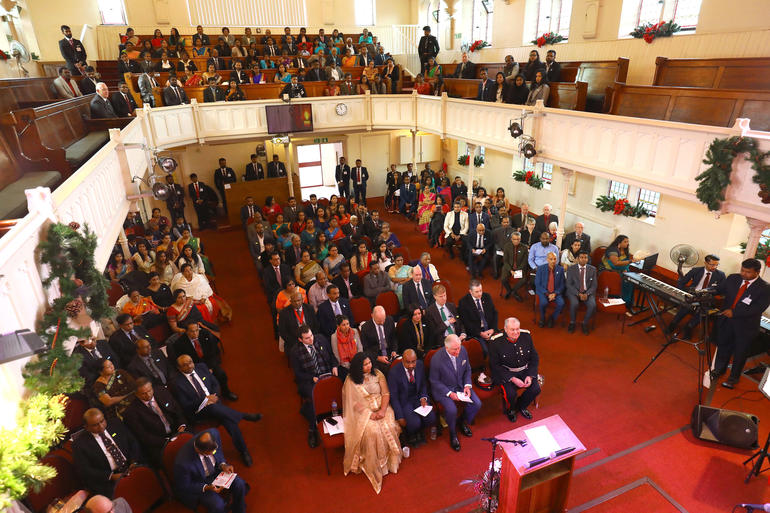 A collection was made for one of the bombed churches during the service, and in an adjoining church hall Charles was later shown static displays of the religious sites targeted, which included some pictures of the victims.

Many of those killed were Sri Lankan but there were a number of foreign nationals, including from India, America and Britain.

The prince also told the congregation: “To see people grieving together across community, ethnicity and religious denomination and standing together in quiet defiance of those who would divide us, gives me confidence that compassion and community will always prevail.”

Charles met a large number of members of the congregation, whose church was established by Englishman Jonathan Eden and is now led by Pastor Kamal Krishnasamy. 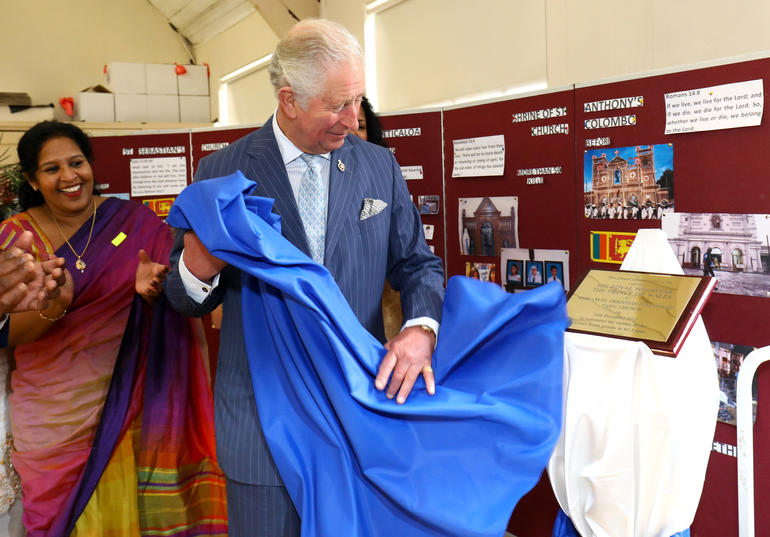 The Prince of Wales makes a speech as he attends an advent service at the Emmanuel Christian Fellowship Church in London to remember those affected by the Easter Attacks in Sri Lanka.

With a cup of tea in his hand, Charles chatted to Kamiston Jogathilaraja, 27, originally from Sri Lanka but now living in nearby East Ham, who lost six members of his wider family and four friends in the bombing of Saint Anthony’s Shrine.

Mr Jogathilaraja said: “Jesus told us to forgive those who do wrong to you and show the other cheek, but even though we did it and are Christians, sometimes it’s hard – because we are human – just to forgive.”

Speaking about a cousin killed in the bombing, he added: “Every time I see my cousin’s wife, whose got a three-month-old baby, crying in front of my cousin’s picture it’s very hard – but at the end of the day we are forgiving, we are just moving on as a nation.”

The prince has developed a tradition in the run-up to Christmas of visiting persecuted Christian communities, to listen to their experiences, attend services and show solidarity with their plight.

Before leaving he unveiled a plaque to mark his visit and went on a brief walkabout, meeting a small group of well-wishers who had gathered outside.