Church launches GoFundMe appeal to help save its mosaics 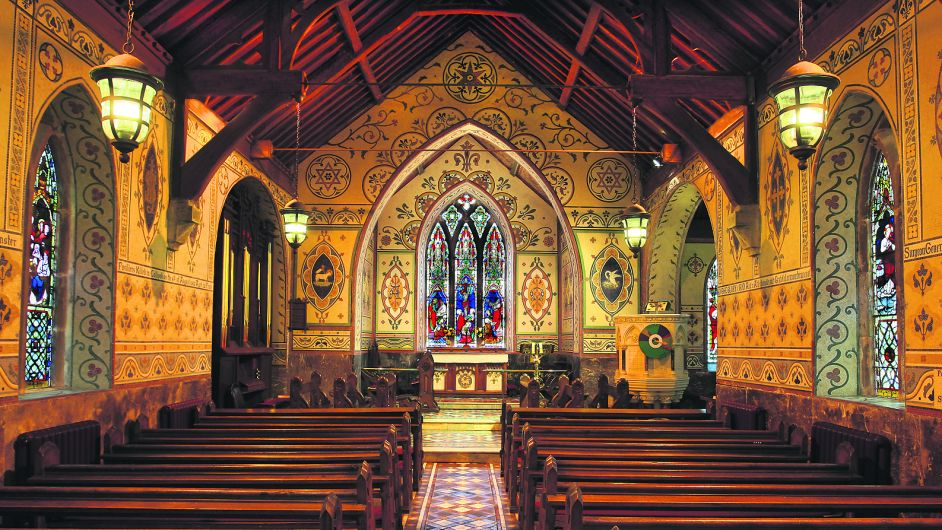 A small community in Timoleague is passionate about preserving its historic mosaics for future generations, writes Emma Connolly in Southern Star

A Timoleague church has launched a fundraising appeal to help restore its unique mosaic-covered interior.

A sum of €400,000 must be raised to restore the Church of the Ascension in the coastal village and prevent damage to its incredible mosaics, many of which were donated by an Indian prince and which transcend colour and religion.

If the ambitious restoration project doesn’t get underway this summer, according to local man Darren Platts, it will be a case of moving past the point of no return and the mosaics, and the story behind them, will be lost to future generations.

But the tiny Church of Ireland congregation of around just 20 people or so, is determined to protect their gem of a church and have issued a heartfelt public appeal for help.

Located in a graveyard, the Anglican Church dates back to 1811, and while it is certainly postcard pretty, its exterior gives no clue as to its incredible interior, where every last inch is covered by mosaics.

It’s these mosaics, created between 1918 and 1925, which experts have declared to be of high historical, architectural and cultural value, which set it apart.

The mosaics began in 1894 by local man Robert Augustus Travers in memory of family members. The work was continued by his son Robert, in 1918 in commemoration of his father and brother who were killed at Gallipoli.

The second phase of the mosaics take on a colourful twist and represent what was a deep, if not somewhat unusual, friendship between a West Cork-born surgeon, and an Indian Prince.

Aylmer Martin Crofts trained in Queen’s College (now UCC) and travelled to India where he was a tutor to the Maharajah of Gwalior in India when he was a young boy.

When the Prince grew up, Crofts saved the life of his young son after he became ill, and their incredible bond was deepened further.

Crofts died in 1915 and in his memory, the Maharaja donated the mosaics to Timoleague.

According to the hefty conservation report, recently commissioned by the congregation as part of their restoration campaign: ‘The last phase of mosaics was completed in 1925. These were installed by Italian craftsmen and were paid for by the Maharajah of Gwalior as a memorial to his friend and physician, Lt. Col Crofts from Concamore (near Ring), who had saved the life of his son.

‘The mosaic was completed by Italian workmen in 1925, 10 years after the doctor’s death. The mosaic, most likely designed by the Church of Ireland architect W.H. Hill, is a blend of the European and the Islamic.’

Scholars wrote that the mosaics ‘transcended the sectarian divide between Irish Catholic and Protestant, the Indian Muslim and Hindu, personal friendship breaking up distinctions of caste and colour.’

However, not everyone felt the same at the time. The conservation report states: ‘The image of the crucifixion in the east window was considered “graven” by the Bishop of Cork, Cloyne and Ross at the time, Dr. John Gregg, who refused to consecrate the new chancel and vestry unless the section of the window was covered up.’

The church, in the Kilgarriffe Union of Parishes, took a battering during Storm Ophelia and required some initial repairs, however an extensive schedule of works have now been outlined for the coming years.

An incredibly generous donation of €30,000 from a member of their congregation has gotten their fundraising off to a promising start and brought their own savings to around €60,000.

Darren, who is leading the fundraising campaign with Harriet Emerson, said they’re hopeful of getting a grant from the Heritage Council of around €50,000 which would leave them a shortfall of around €50,000 for the work they want to do this summer which includes completing roof repairs.

Next summer their ambition is to tackle the most crucial aspect of works and that is to stabilise the internal atmosphere to preserve the mosaics.

Dampness and moisture is causing plasterwork to bulge and tiles to detach. Salt efflorescence is also visible on wall surfaces, and some mortars have deteriorated. Darren says the putty is still holding the mosaics in place, but it’s only a matter of time.

A new heating system needs to be installed to avoid extreme changes in temperature.

The conservation report concluded: ‘This church is of national importance and it is vital that it is adequately maintained to avoid the loss of irreplaceable historic fabric.’

Local woman and church warden, Susan Hanbridge has added her voice to the appeal and said the church as a building has always been ‘hugely special’ to her.

Following in the footsteps of her dad Rex, who was church warden before her, she said: ‘I’ve a distinct memory of sitting alone in the church on the morning of our wedding absorbing the serenity and beauty of the space as sunlight came through the stained glass and created patterns on the mosaics. It was one of the highlights of a truly lovely day.

‘Both our children, Sadbh and Daragh were christened there. We wanted to have our church celebrate our joy in their arrival aswell as share our faith with them in this lovely space. We are so lucky to have such a gorgeous gem as our place of worship and hope it will be around to resonate with future generations. Please help us to retain this glorious place.’

And Darren and the group added: ‘We are a small community and are passionate about preserving this little gem. It is a special church with many unique features. We believe it is our duty to preserve it for future generations.’

A GoFundMe page has been launched and the community is encouraging people of all denominations to visit the church and see the wonder of the mosaics for themselves. A key is available at the local post office to facilitate this.

For more information and to donate see http://GoFundMe.com and