Coronavirus: What will church services look like in the ‘new normal’? 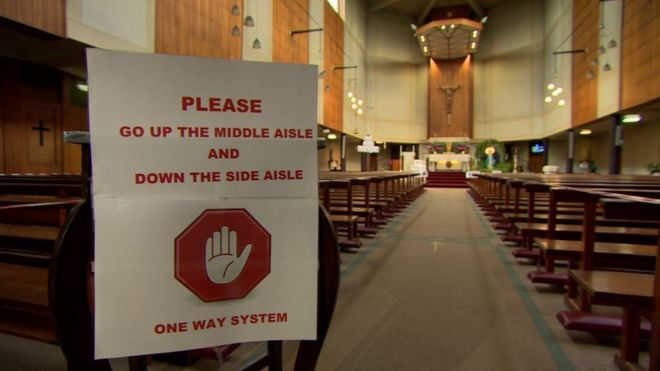 It is the announcement churchgoers in Northern Ireland have been waiting months for.

Covid-19 emergency legislation led to the closure of churches in March, with private prayer only allowed again in May, Naomi Holland reports on BBC News NI

Last Friday, the executive confirmed services can resume from Monday 29 June, but it may take a little longer for communal liturgy and worship to actually take place.

That is because the guidelines for safe worship now have to be implemented.

Those guidelines have been developed through ongoing discussions between faith leaders, the Stormont Executive, its scientific advisers, and the chief medical officer.

But what will our local churches look like? And will services be any different?
The ‘new normal’ for churchgoers

Although the go-ahead has been given for services to resume, it may be some time before all places of worship are able to open to their parishioners.

That will ultimately depend upon the size of the building and how many it can accommodate under the current social distancing guidelines.

Although the executive has reduced the distance to 1m (just over 3ft) churches have mostly decided to stick with the original 2m (6ft) to build confidence as parishioners return.

There will also be additional rules around the distribution of communion, sharing of prayer books and hymn sheets, cleaning between services and the use of hand sanitiser.

We asked three local clergy to outline what will be happening in their parishes over the coming weeks and months.

A difficult but exciting time’ 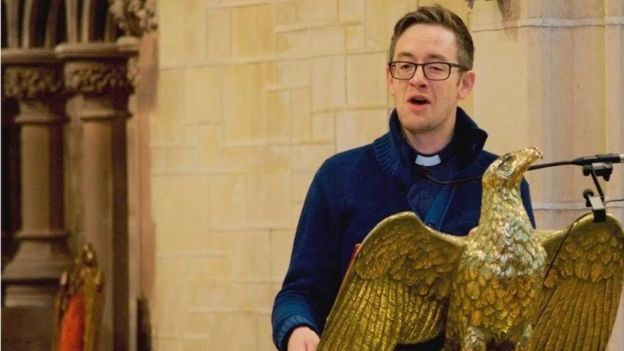 Before the Covid-19 pandemic the Church of Ireland cleric would typically have led services for about 500 parishioners across the two church buildings.

He’s hopeful of holding at least one service next weekend, on Sunday 5 July. But he still doesn’t know how many people they will be able to welcome, adding a team of “very capable people” will be getting the tape measures out and doing the maths.

Anyone who does want to attend one of his services will have to pre-book a ticket online, or through the church office.

They will enter and exit through different doors, sanitise their hands, and follow stewards’ instructions as to where they can sit. There will be no hymn books or service sheets with screens used instead.

Rev Genoe says he’s worried about how services will be affected: “I think it won’t have the same dynamic and sense of community we would normally enjoy. But buildings are important places where people have met God and important events have happened.”

Drive-in church services in a nearby field have been popular with parishioners, as have online services. Rev Genoe says they will continue for anyone who is shielding, or doesn’t yet feel confident enough to come to an indoor service.

“It’s a really difficult time, but it’s an exciting time as well.

“People are saying we need to do life differently after this and I think we should consider doing church differently as well.” 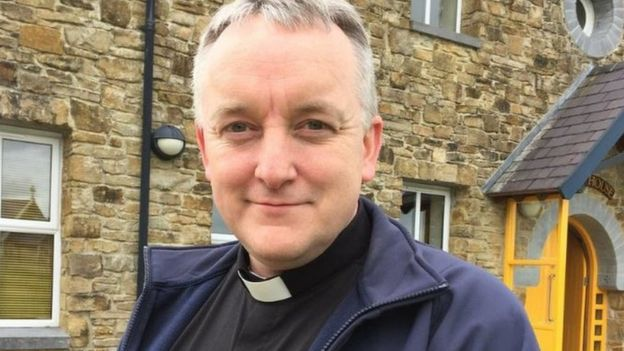 Fr Edward Magee is a spokesman for the Roman Catholic Diocese of Down and Connor.

He says every Catholic church in Northern Ireland will carry out its own risk assessment process and there will be a “phased return” of services over the coming weeks and months.

But he’s very clear it will not be a return to normal practice, with parishioners encouraged to attend Mass on any day of the week to fulfil their Sunday obligation.

Face coverings will be worn by priests while they are administering Holy Communion – which will now only be placed in the hand, and not the mouth.

Fr Magee also wants those who are shielding during the pandemic to continue watching Mass online.

“The digitalisation of pastoral support and of prayer and worship has been a positive aspect during the pandemic,” he says.

“It has allowed for an ongoing engagement between clergy and society over the last difficult weeks and months.”

But he says the use of technology meets its limit when dealing with bereavements, and does not replace the traditional engagement with people at such a difficult time.

“We are now looking at holding memorial services for those who died and couldn’t have proper funerals during the pandemic, but that will take some time,” he adds.

No tea and biscuits

Before coronavirus, about 150 people would have made their way to Stormont Presbyterian Church in Belfast to hear the Rev Albin Rankin preach on a Sunday morning.

He thinks they may be able to seat only a third of that number when the building re-opens – which probably won’t be until mid August.

A large percentage of his parishioners are aged over 70, so he thinks that will also affect the numbers attending.

Rev Rankin says they don’t want people to rush out to worship again and will continue to provide online services and other digital innovations which have proven popular during lockdown.

And he says the resumption of services is likely to have ups and downs.

“Coming back together again, it will be welcome just to have that connection – albeit at 2m and without the customary cup of tea and a biscuit.

“That fellowship and community part will still feel a little strange and difficult.”

As with other churches, there will be strict social distancing and Rev Rankin thinks the services themselves will be reduced in length to just 35-40 minutes, with shorter sermons too.

“There is the issue of music as well. We can have singing to some extent, but… it increases the risk so we will have to choose pieces that you would instinctively sing more quietly, rather than pieces that are more rousing and you would be belting out.”