Council approves demolition of one of Dublin’s biggest churches

The demolition of one of Dublin’s biggest Catholic churches, and its replacement with a new place of worship only a tenth of the size, has been approved by Dublin City Council, Olivia Kelly, Dublin Editor, writes in the Irish Times.

The Church of the Annunciation in Finglas West was built in the late 1960s for a capacity of almost 3,500 parishioners, during a church-building boom initiated by the then archbishop of Dublin, John Charles McQuaid.

The new church will seat just over 300, with the residual land to be used for senior citizens’ housing. However, documents show the parish also plans to sell a neighbouring site of almost six acres, which is several times larger than the church site, to Dublin City Council.

The larger site, known as St Fergal’s Field, is sandwiched between three schools. The council had initially hoped to use the field for housing, but is now in negotiations with the Health Service Executive to use the land for a primary care centre.

Three years ago, the church announced plans to demolish the vast building due to falling attendance numbers. It could also no longer afford the upkeep of the building, with the concrete and steel structure having deteriorated to the point that it gave rise to safety concerns.

Archbishop of Dublin Diarmuid Martin celebrated the final Mass in the Church in October 2018, and an application was lodged with the council the following May for the demolition of the building and the construction of the new, small church and a parish centre.

However, the decision to grant permission for the work took more than eight months, following concerns raised by the council planners over the future use of the residual church lands.

In a letter to the parish, planners said the application had included “sparse information in relation to the intended future use of the remaining part of the site” that would not be required for the new, smaller church.

“The development description and accompanying planning report both state that the residual site area will be the subject of a separate future application, and the architectural design statement states that this area will be used for the development of accommodation for senior citizens, although no further information is provided.” 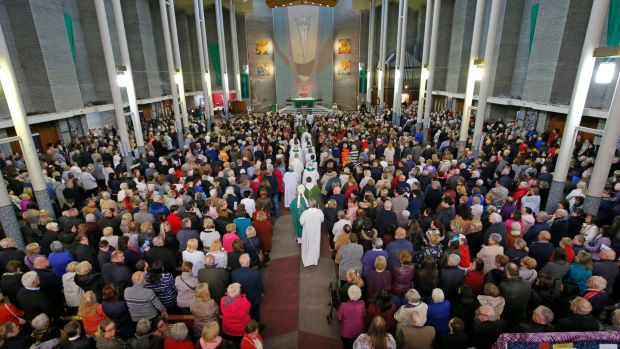 The final Mass at the Church of the Annunciation in Finglas West in October 2018, celebrated by Archbishop of Dublin Diarmuid Martin. Photograph: Nick Bradshaw for The Irish Times

The letter also makes reference to St Fergal’s Field and how “the retention of existing functional open space, eg school playing fields” would be addressed.

In response to the planners, the parish said the field had been “derelict for several years and is subject to anti-social behaviour”.

A letter attached to the response confirms representatives of the parish “are in advanced negotiations” with the council to buy both the surplus church lands and St Fergal’s Field.

In the region of 50 senior citizens’ apartments are proposed for the former Church site. St Fergal’s Field could have accommodated more than 100 apartments, but it is understood that the council dropped plans for homes on the site due to problems with access to roads and concerns over potential local opposition.