Dialogue to the fore in Northern Ireland 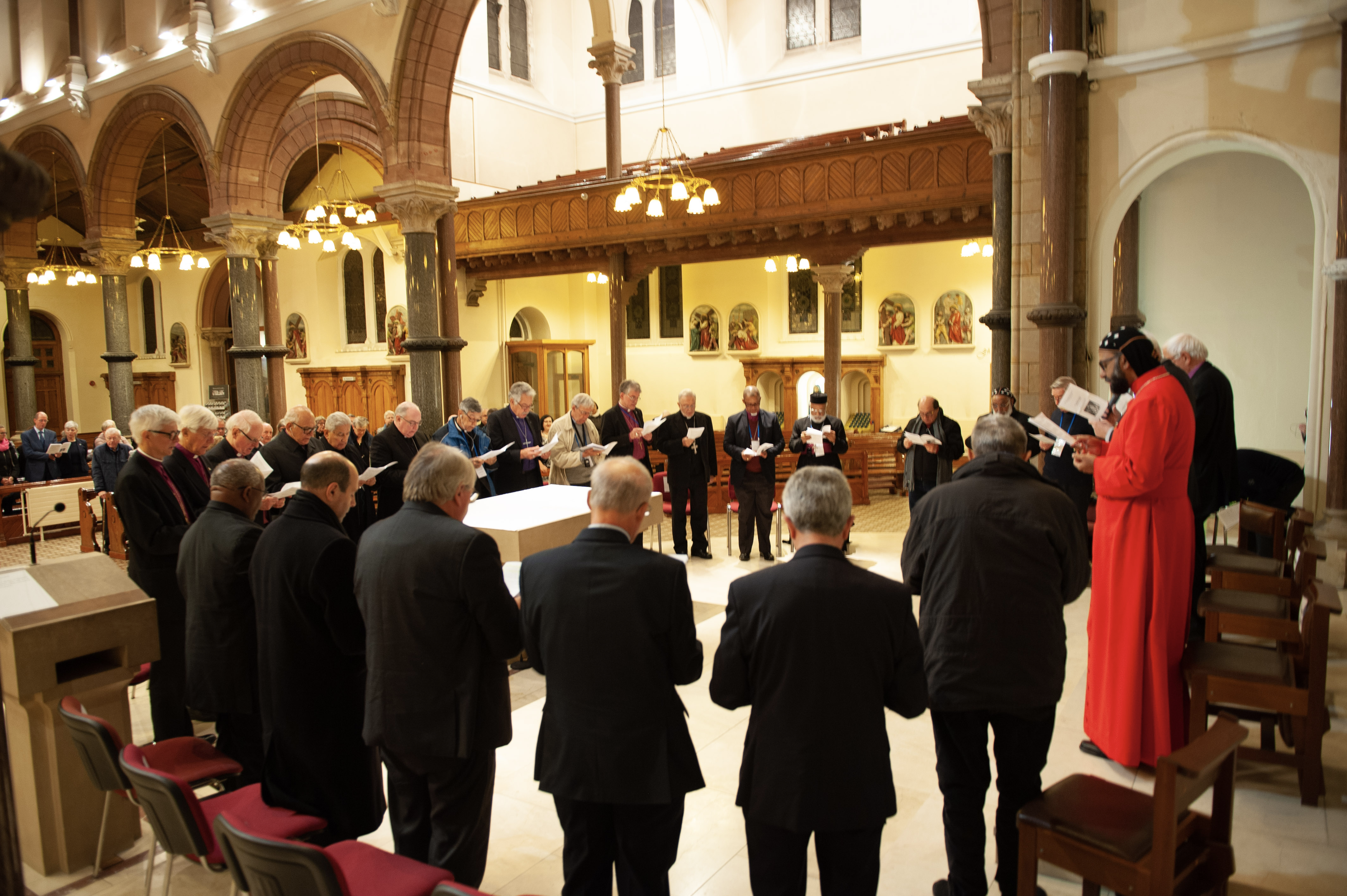 Photo above – The event was organised by the Focolare Movement, inspired by Jesus’ prayer to the Father, “May they all be one”. Patrticipants worshiping in St Patrick’s Roman Catholic Church in Donegall Street, Belfast

The Catholic and Church of Ireland Archbishops of Armagh, Most Revs Eamon Martin and Richard Clarke, have paid tribute to people in Northern Ireland for the dialogue and engagement between Christians from different churches as something which supports and enables theological dialogue.

In Drumalis Retreat and Conference Centre, Larne, on Wednesday 23 October, more than 120 people from various Christian denominations met with ecumenical bishops from across the globe to share their experiences of dialogue with Christians from churches other than their own. They said that this “dialogue of life” is Christianity in practice and particularly in friendship.

“People were able to share stories, experiences and insights in a way that gave us all a lift and offered hope,” Bishop Brendan Leahy, Catholic Bishop of Limerick, commented afterwards.

“It was great to see how the testimonies of local bishops and church leaders and collaborative initiatives between people from different churches, such as Embrace NI, the 4 Corners Festival and Dublin Council of Churches, gave so much hope to bishops from many different countries,” said Maria Rosa Logozzo, Focolare Belfast.

There were 30 bishops from 18 different churches in 14 countries, who stated they were deeply impressed by the depth of collaboration shown by Christians in Ireland and especially in Northern Ireland.

Rev Sarah Groves, Bishop of the Moravian Church in Great Britain and Ireland, said that “it was inspiring to hear the stories of faith in action in many parts of the world”.

The bishops attended several liturgies during the week: Syrian Orthodox, Lutheran, Roman Catholic and Anglican. On the evening of 24 October, the bishops participated at a Choral Evensong in St Anne’s Church of Ireland cathedral, Belfast.

Immediately afterwards they walked together to the neighbouring Roman Catholic church, St Patrick’s, Donegall Street. During an ecumenical service they made a solemn commitment, in the light of Jesus’ “new commandment”, to love one another’s church and consider each other’s crosses as their own, inspired by the gospel phrase “May they all be one” (John 17:21). The multi-denominational congregation followed this by spontaneously exchanging the sign of peace and later joining the bishops for a meal in the parish hall.

Former Presbyterian moderator Rev Ken Newell described the event as a “new Pentecost where Christians of different churches from all over the world were one in the Spirit, where the unity of Church was felt … for the well-being of the world”.

The bishops and church leaders were part of an ecumenical meeting which took place from 21 to 25 October. The bishops visited Fitzroy Presbyterian Church, Belfast; the Methodist Skainos Centre at the East Belfast Mission; and the Corrymeela Community. They also toured Belfast city.

There were 19 churches present at the open afternoon including: Armenian Apostolic; Anglican Churches of England and Ireland; Church of the Province of Southern Africa (Anglican); and Lutheran Churches of Finland and Sweden.

Orthodox Patriarchates of both Constantinople and Antioch and members of the Syrian Orthodox Church of Antioch attended, as did representatives of the Methodist Church in Ireland, Brazil and Southern Africa. Also present were members of the Presbyterian and Catholic Churches in Ireland as well as the Moravian Church of Great Britain and Ireland.

The event was organised by the Focolare Movement, which is present in Northern Ireland and the Republic of Ireland, and active internationally in ecumenical, inter-faith and inter-cultural dialogue aimed at building a more united world in which all people are valued and respected. It is inspired by Jesus’ prayer to the Father, “May they all be one” (John 17:21).