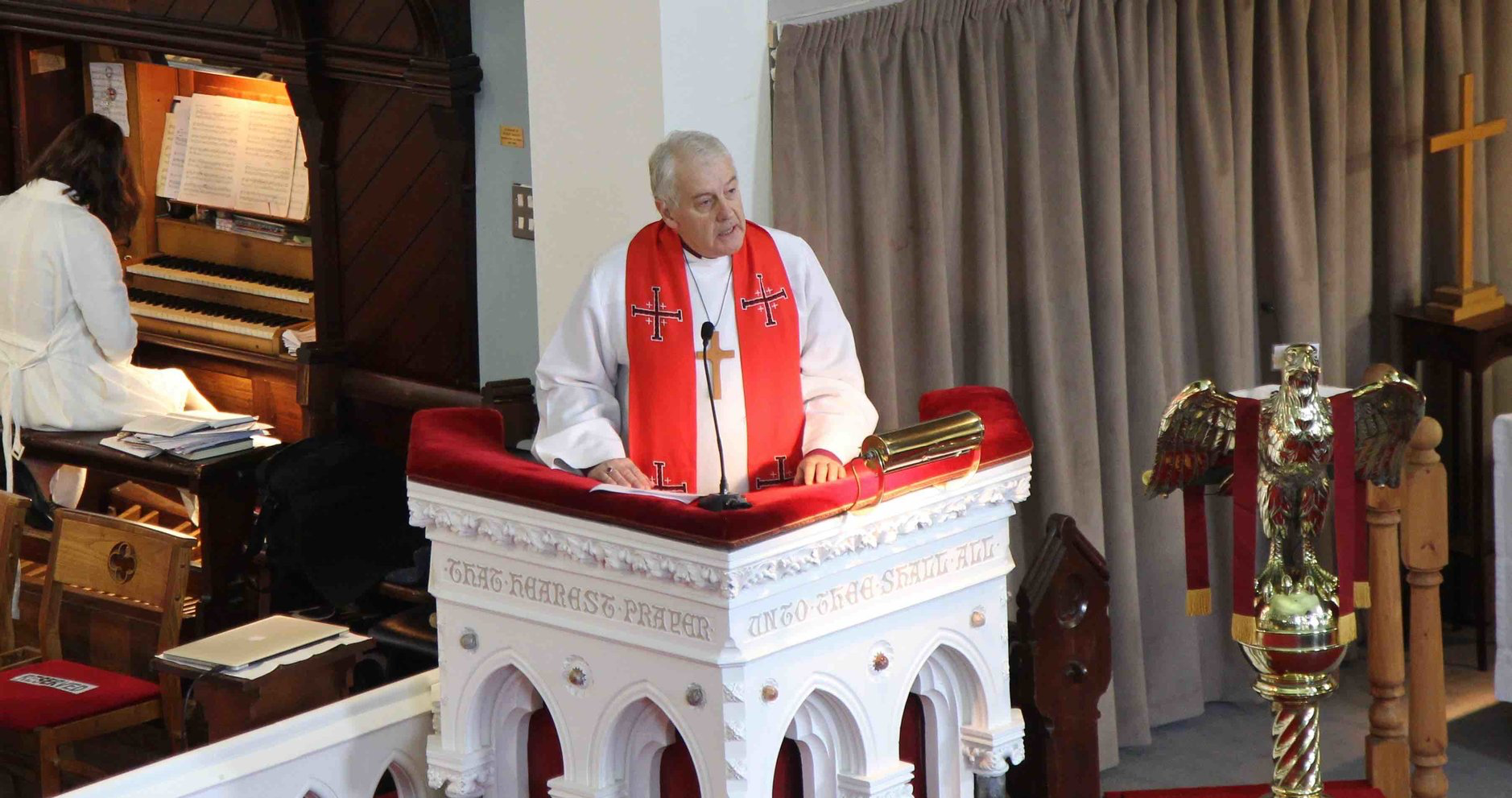 The people and clergy of Dublin & Glendalough can shape their future with confidence in the 150th year since the Disestablishment of the Church of Ireland, Archbishop Michael Jackson has told Diocesan Synods this afternoon (Tuesday October 8). In his Presidential address to Synod members in Christ Church, Taney, the Archbishop explored identity through the lens of Disestablishment, Brexit, and the diocesan discipleship project, Come&C.

Archbishop Jackson said that much energy was taken up today with questions of identity. Members of the Church of Ireland, he said, had a unique opportunity to take a positive spirit forward as we commemorate the 150th anniversary of Disestablishment.

He referred to a recent scholar of Disestablishment who said that the reaction of the Church of Ireland (formerly the Church of England and Ireland) to Disestablishment in 1869 was to move towards introspective self protection and withdraw from the public square. While not refuting this, Archbishop Jackson said that allowing such a mindset of decline and demoralisation continue to deepen did not bode well for the institutional survival of the Church or for individual engaged citizenship.

He said it was still “terrifyingly unclear” what story the picture of Brexit would tell in both parts of the island. Obsession around the backstop had effectively stopped people from asking what the frontstop was, he said adding that debate and discourse had coarsened and hardened and populism and parliamentarianism were pitted against one another.

“My own thoughts are with the whole range of people who are affected by Brexit in many jurisdictions and in a very specific way in Ireland and in the Church of Ireland. This is a European issue that cannot be ‘marketed’ as solely an Irish problem. People live and work on what is now changing from being a peaceable border to being a contested border. Peace in its day was courageous. Peace today remains a precious prize right across Ireland. Our Peace is an International Agreement. Borders are liminal spaces, places of transformation and of transition, and they teach and tell all of us a lot of things about ourselves that we would never see by ourselves or left solely to our own devices. The people of The Border are people like myself with whom I have grown up, whom I greatly respect and with whom I subsequently ministered. They are fast becoming a pawn in a politics of cynical neglect and atrophy of understanding. They are our people too, however different they may sound,” he said.

The analysis that Disestablishment resulted in the Church of Ireland becoming introspective placed too little emphasis on the exploration of Anglican identity, the Archbishop said pointing to his predecessor Dr McAdoo who suggested Anglicanism was shaped by Scripture, Tradition and Reason. In recent years Dublin & Glendalough has been exploring and expressing what it is to be a disciple through the Come&C programme. This has been done through the Five Marks of Mission of the Anglican Communion.

Archbishop Jackson said that the Five Marks of Mission were a common language to take into our relationships with neighbours inside and outside churches in Ireland and with neighbours of other World Faiths or of no faith.

“Lest the Church of Ireland still be concerned to settle for introspection and self–protection, in the opinion of its recent scholarly analyst, lest the Church of Ireland still prefer to sidestep its capacity to connect with the public square, The Five Marks of Mission are a language of informed engagement for everyone, not exclusively for clergy. Everyone can do this and many have done so already. Such a democratization of opportunity is a blessing with no disguise and I would suggest the right place for a confident Disestablishment to be in its 151st year: Proclaiming God’s Kingdom; Teaching, baptizing and nurturing; Responding to human need; Transforming unjust structures; Safeguarding creation,” he stated.

Come&C gave local voice to confident, coherent Anglicanism in the United Dioceses of Dublin & Glendalough, he said, noting that the report of Come&C would be launched at Synod.

“The Report shows that it is what so many of us are already doing and this is what I hoped for and longed for. For this reason, perhaps most of all, I am particularly proud of the people and clergy of this diocese as we show we are ready to shape our future without need for fear in the 150th year of Disestablishment and beyond. We have many needs as a diocese to address. We have difficulties that are also opportunities. But one of our greatest difficulties and opportunities will be growth rather than decline – growth in numbers of people living in Dublin and growth in the urgency of our response to their being here among us as our neighbours. And that is hardly a difficulty,” he said.

He concluded by urging the people of the dioceses to celebrate who we are, consolidate what we have done and what we can continue to do and create ways to bring the goodness of God into the lives of others. In this way we can build community local, enjoying a shared journey and joint adventure, he said.