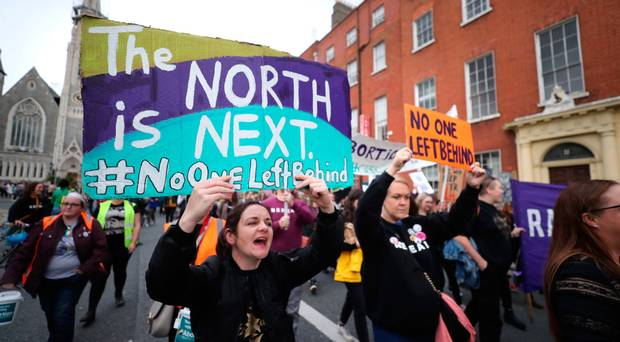 The DUP has said it is ready to return to government at Stormont “immediately without pre-conditions” after the Presbyterian general secretary said unionists should “set aside their red lines” about an Irish Language Act to stop the legalisation of abortion.

The Rev Trevor Gribben’s appeal came after a joint statement from the leaders of Northern Ireland’s four main Churches expressing their concern at the prospect of an “almost unregulated abortion regime” being “imposed” by Westminster.

But a DUP spokesman last night insisted the party was not at fault. They said: “In August 2017, Mrs Foster offered to legislate for the Irish language. This was rejected by Sinn Fein within 90 minutes.

“We are the only consistently pro-life Executive party.

“We will form an Executive immediately without any pre-conditions. It’s time for Sinn Fein to lift its boycott.”

Mr Gribben told the BBC that abortion laws should not be introduced without “proper scrutiny and consultation” with people in Northern Ireland.

“What we’re saying to all parties is that people need to set aside their red lines. The issue of unrestricted abortion is too serious to be having pointless debates over the Irish language,” he said.

“It is in the hands of our politicians to do something about this, they must come back… the Irish language is nothing to fear in my community.

“People have politicised it by saying ‘It’s a big demand’ – it’s not. My fellow citizens, often many Roman Catholics, people from a nationalist background – the Irish language is precious to them.

“Therefore we shouldn’t be afraid to bring in sensible Irish language legislation and people that try and block it by saying it would be a big compromise are actually doing us a disservice.

“Abortion is more important – we should get back to our devolved settlement.”

Alliance MLA Paula Bradshaw said: “I welcome any civic engagement which pushes the point it is for the DUP and Sinn Fein to recognise the deal already in place and to take the responsibility that comes with their mandate.

“The Assembly needs to be reformed to function properly in the longer term, but to be clear Alliance MLAs would happily sit in a reconvened Assembly tomorrow to legislate and drive policy on jobs, health reform and social issues.”

Ms Bradshaw, who supports abortion law reform, said she had “worked on an Irish language compromise which has been available since September 2017 as a basis for restoration of the institutions”.

Grainne Teggart of Amnesty International said the Churches do not represent the “vast majority” of people in Northern Ireland who have “long favoured change”.

She said: “Finally, we are getting to a place where we will have a compassionate response to crisis pregnancy.

“There must be no return to Stormont before October 21 without abortion reform agreed on exactly the same terms as has been secured at Westminster.

“These rights have been long and hard fought for and we will not accept these being sacrificed for political expediency.

“It would be foolhardy of any political party to think otherwise.”

In their statement, the Church of Ireland, Catholic, Presbyterian and Methodist Church leaders said there was “no evidence” that liberalising the abortion law reflected the “will of the people affected by them, as they were not consulted”.

The Churchmen added: “They go far beyond the ‘hard cases’ some have been talking about.”

They invited their members to sign an online petition created by Baroness Nuala O’Loan, and added: “Our Northern Ireland political parties have it in their own hands to do something about this. They all need to take risks and make the compromises necessary to find an accommodation that will restore the devolved institutions.

“We are calling on the Secretary of State to recall the Assembly before October 21 to provide an opportunity for the parties to take the necessary steps both to prevent these laws coming into effect and to find a better Northern Ireland solution for these challenging issues.

“Finally, we hope to meet with the Secretary of State to discuss with him our concerns – concerns that we share with a significant number of our fellow citizens of all faiths and none.”

The Church leaders did not refer to same-sex marriage in their statement.

The Rev Gribben commented: “The Church leaders recognise that many of those other issues, such as Irish language legislation and the change of the legal definition of marriage, are important to many people in our society.

“However, both of these are not issues of life and death, as the proposed Westminster abortion regime is, in the eyes of many in our society.”