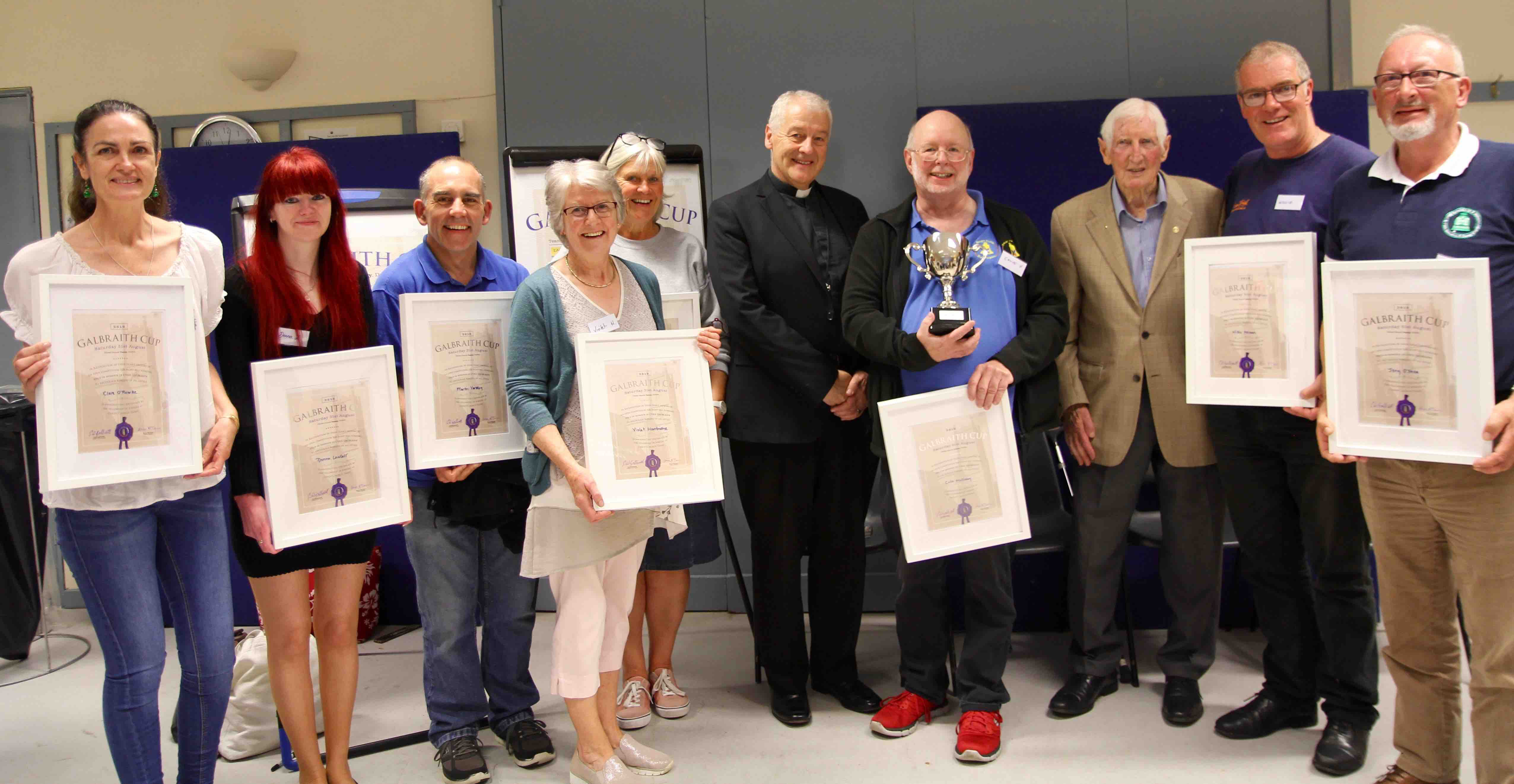 The inaugural Galbraith Cup bell ringing competition took place in Christ Church, Taney, on Saturday afternoon (August 31). The eight bell open ringing competition attracted eight teams from towers as far afield as Cork and Limerick in the south and Drumbo and Bangor in the north.

Photo above – The winning team of the inaugural Galbraith Cup – Team 8 – with Cyril Galbraith and Archbishop Michael Jackson.

The cup was donated by veteran bell ringer, Cyril Galbraith who has been ringing for 80 years. Cyril’s longevity as a bell ringer, first in St Mary’s Cathedral in Limerick and later St Patrick’s Cathedral in Dublin before finally moving to Taney where he continues to ring, saw him shoot to fame earlier this year when he was hailed as Ireland’s oldest bell ringer.

The fun competition was organised in his honour and Archbishop Michael Jackson was on hand to present the cup to the winning team, as well as a gift to Cyril to mark the occasion. The teams were made up of a mix of competitors of varying ages and abilities from different towers. Cyril himself was among the judges who selected ‘Team 8’ as the winners.

Christ Church, Taney, has a strong bell ringing tradition. The bells come from St George’s Church, Hardwick Street in Dublin and were immortalised by James Joyce who mentions them in ‘Ulysses’. When St George’s closed in 1990 the bells were put into storage but a team from Taney, which included Cyril, took it on as a Millennium project and 10 years later they were installed in Christ Church.

The future of bell ringing looks bright for the Taney tower as, while Cyril continues to ring, young ringers are taking it up. Thirteen year old Beulah was the youngest competitor on the day and 10 year old Jacob is in training.

A number of people gathered to pay tribute to Cyril’s contribution to bell ringing including Darrell and Kieron Brislane from St Mary’s Cathedral in Limerick who spoke about his time there and brought greetings from the current Dean, the Very Revd Niall Sloane, a former curate of Taney.

The ringing master of St Patrick’s Cathedral, Derek McEndoo, recounted Cyril’s early days in St Patrick’s tower noting that he started ringing there at a time when ringers trained by the renowned Gabriel Lindoff ensured a very high standard. He rang in St Patrick’s for 40 years until the stairs to the cathedral tower became too difficult to clime and he made his home in the more accessible Taney tower.

Rector of Taney, Canon Robert Warren, thanked Cyril for the wonderful years he had given the parish. “We are very proud of Cyril in Taney. He’s been a wonderful parishioner and on behalf of us all we thank him for the honour he has brought to the parish and to the bell ringing community in Dublin and beyond,” he said. He recalled ringing the bells of St George’s himself while he was training for ordained ministry 45 years ago.

Archbishop Jackson congratulated everyone who took part in the competition as well as the winning team.

Cyril thanked God for giving him almost 100 years – he will celebrate his 96th birthday this year. “I’m delighted to be here and honoured that so many of you took the trouble to come and take part in the day,” he said. He paid tribute to Helen, Brian and Michael for organising the event.