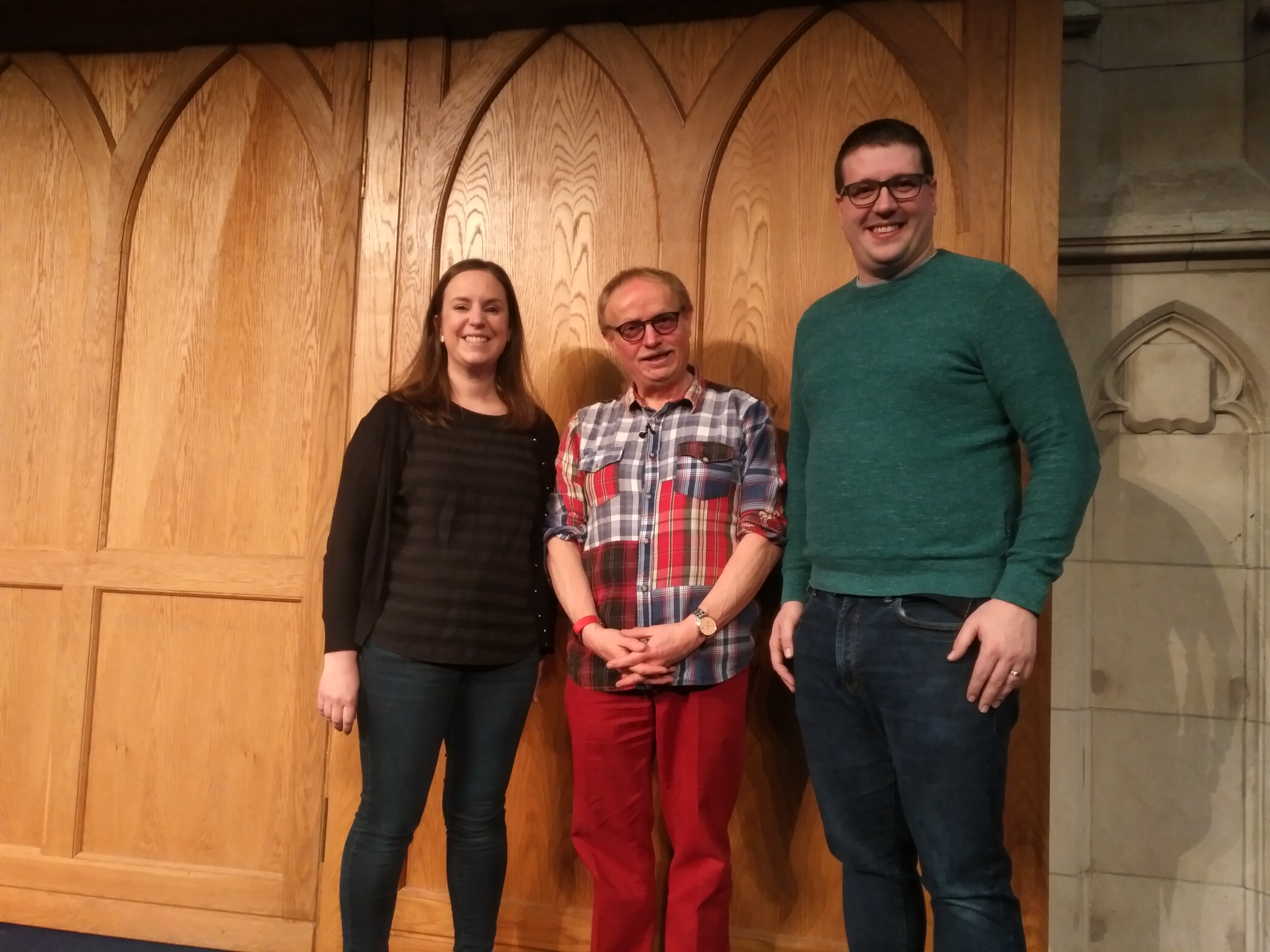 Why are boys so under-represented in churches? Why do churches find it difficult to cater for boys? and what would help boys in church to grow into mature men of faith? These were some of the challenging issues addressed on Saturday (8 February) at a conference held in Belfast by the Presbyterian Church in Ireland’s (PCI). The special event was held in partnership with The Boys’ Brigade Northern Ireland (BBNI).

Organised by PCI’s Council for Congregational Life & Witness, which seeks to support the on-going life, mission and witness of congregations in their work with all age groups, over 250 people attended the conference. Entitled ‘The Church and boys’, the conference looked at how the church facilitates, encourages and engages with boys in congregations across the denomination.

As Ruth Bromley, PCI’s Children’s Development Officer, explained, the idea for the conference came out of some of the issues that were identified in a children’s ministry consultation earlier this year. “There was a great vibe throughout the conference with congregations from across Northern Ireland and County Donegal represented. I was also pleased to see members of other churches attend, as this isn’t a purely PCI phenomenon.

“For us, however, the consultation was an important starting point, along with a book that I read over the summer months by Nick Harding called The Church and Boys. As a children’s leader in my own congregation, I had just finished planning for Sunday around a theme of prayer, when I began reading Nick’s book and it changed the way that I approached that particular Sunday’s activities.

“As I thought about the morning that I had planned again, it dawned on me that I had skewed it to towards girls, and if I am honest, much of our children’s ministry activity is as well.” As a result, Ruth reworked the activities that she had planned.”

This one-off conference was an opportunity to hear stories, look at resources and listen to Nick Harding talk about the issues churches need to address, while encouraging churches to see this in missional terms.

Explaining one of the imperatives behind the conference, Ruth Bromley said, “If we don’t get ministry with boys right, we are in danger of losing them from our congregations. One of the patterns of behaviour that I have seen is that mums come to church with their children, but as the boys get older they see that dad doesn’t come to church and they begin to ask why should they – then they stop going.

“Fast forward 20, 25 years and if they get married, have kids – who go to church with mum, as dad stays home – their sons will grow up and leave. It is a pattern that we need to challenge and break. Church needs to be a place where boys want to be and where they can be role models to other boys in the generations to come.”

Keynote speaker, Nick Harding, is an author and broadcaster and the father of two grown up sons. He lives in Nottinghamshire, with his wife Clare, where he is a lay leader of two churches. Until recently, he worked for the Church of England Diocese of Southwell and Nottingham supporting children and family work in over 300 churches.

“Boys are different from girls. Boys are part of God’s great creation, just as girls are, and God is a God of diversity, but there are a huge number of issues facing boys that make them different and may be affecting the way they become men,” Nick Harding said.

“For example, Testosterone in boys, which becomes more evident as they get older, slows down brain development whereas Oestrogen in girls speeds it up. How then can our churches expect 10-year-old boys to behave as sensibly as 10-year-old girls? Often the church looks for both an intellectual level of understanding and an emotional response, which is difficult for boys of any age,” he continued.

“Having said that, I want to be very clear that this is not a criticism of the great work that is being done across our Church, it just means we need to look at the way that we do things and try different approaches. This could be our female leaders thinking more about the boys in their midst, or encouraging more men into children’s ministry, allowing them to live out their faith as men for the boys to see. 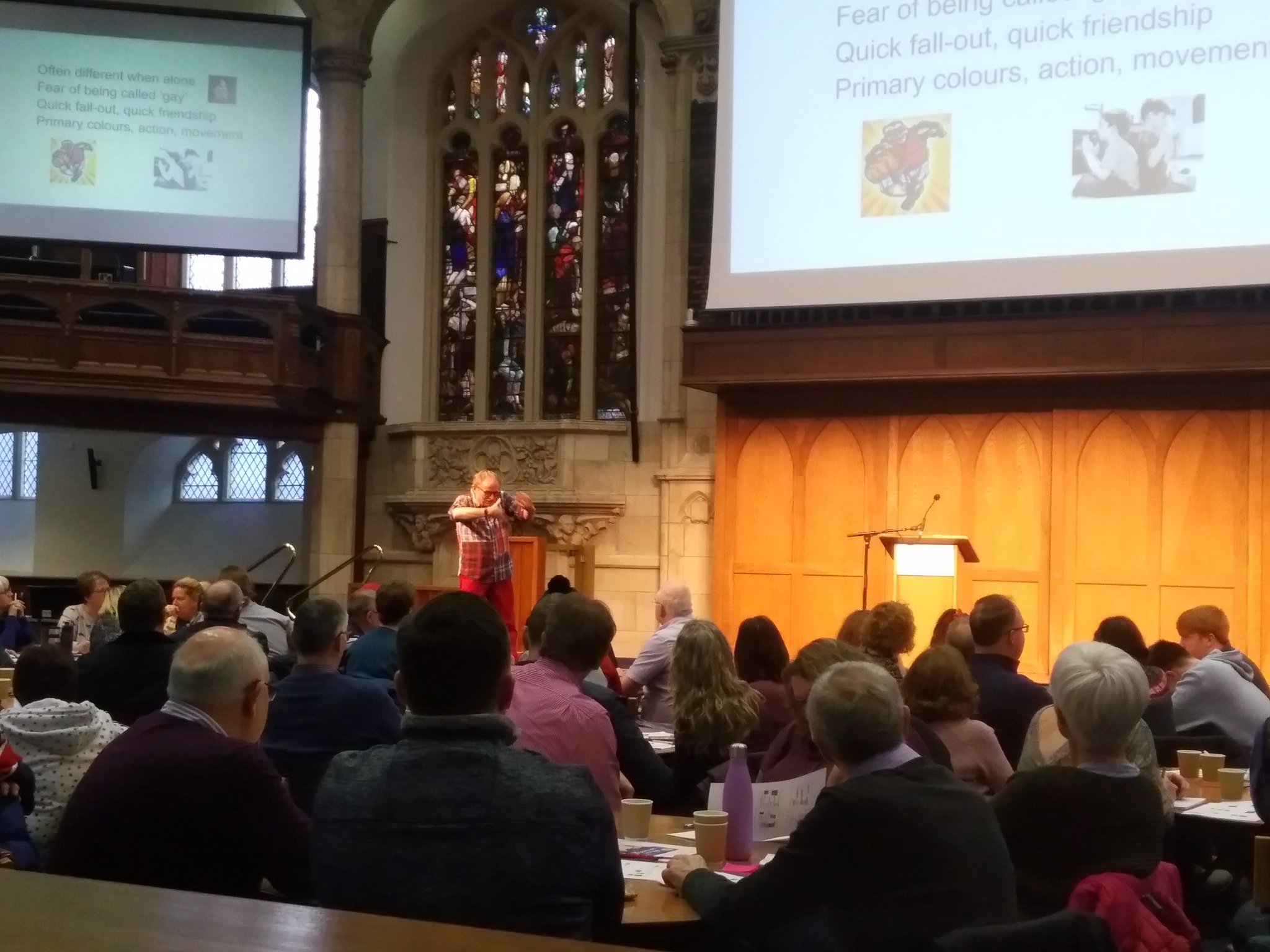 Keynote speaker, Nick Harding, emphasises a point during his presentation at ‘The Church and boys’, a conference organised by the Presbyterian Church in Ireland, which looked at how the church facilitates, encourages and engages with boys in congregations.

“By being more inclusive of boys and their particular needs, we can set in train a path that will hopefully see more boys, teenagers and young men engaging with their faith, staying in church and discipling others,” she said.

For this event, PCI partnered with The Boy’s Brigade Northern Ireland. BBNI’s David Penney, Training and Programme Officer for The Boys’ Brigade Northern Ireland, also spoke at the conference. “It is important that churches have male role models who engage with youth and children’s activities, so our boys see them in the front line of our congregations.

“This can present significant challenges, and it is not just about having men working in the background jobs, or in leadership roles, but releasing them into children’s ministry so that boys will see these role models at a young age. The Boys’ Brigade provides that opportunity,” he said.

“There is no doubt that cultural change in churches is often very slow and can be challenging, especially thinking about mission and ministry to boys in ways that have never been thought before. But it will be worth it.”