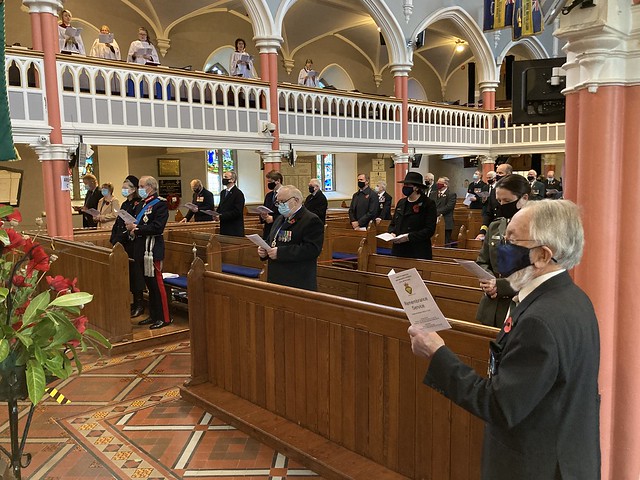 Photo above – The congregation at the Remembrance Service in St. Macartin’s Cathedral, Enniskillen.

The Remembrance Service in St Macartin’s Cathedral, Enniskillen, was one of the main commemorations in Northern Ireland with five governments represented.

The service arranged by the Parish of Enniskillen in conjunction with the Royal British Legion’s Enniskillen Branch, was conducted by the Dean of Clogher, the Very Revd Kenneth Hall, and the preacher was the Archbishop of Armagh and Primate of All–Ireland, the Most Revd John McDowell.

The numbers attending had to be greatly curtailed due to the Covid–19 restrictions.

The lessons were read by Her Majesty’s Lord Lieutenant for Fermanagh, Viscount Brookeborough KG, and Mr Scott Elliott, BTh.

The hymns sung by the socially distanced choir in the gallery and accompanied by organist, Mr. Glenn Moore were ‘Praise, my soul, the King of Heaven’, ‘I vow to thee, my country, all earthly things above’, ‘Lord, while for all the world we pray’, and ‘Be thou my vision, O Lord of my heart’. 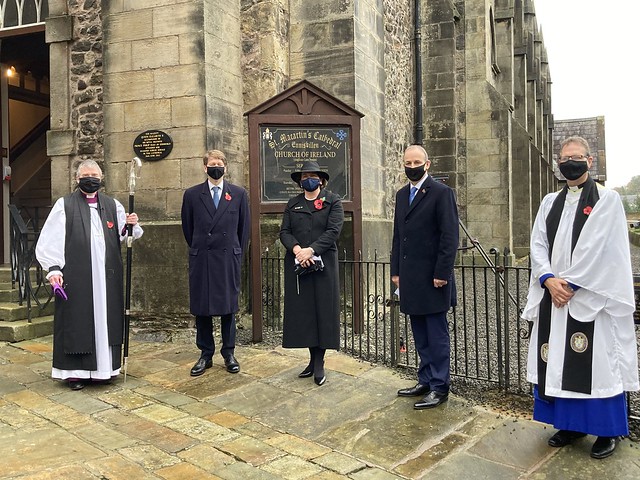 May all the words that I say to you be in the Name of the Father and of the Son and of the Holy Spirit. Amen.

November is a month of remembering. Of minding the time.

It opens with All Saints Day when we remember all those who, in the words of the Collect for that day, God has “knit together in one body” and we ask for grace to follow their example “in all virtuous and godly living”. Very often All Saints is also a time when parishes name and remember everyone who has died in that parish in the year just past. “Minding the time” they were alive, and reminding the community of faith that, although they are out of sight, they are not out of mind or out of communion with us. We are “knit together” with them.

Then comes today, Remembrance Sunday when we give thanks to God for the sacrifice of all those who died as a result of war. On this day we all say together (as we have just done) “We will remember them”. There is no one alive today who actually knew someone who died in the First World War, so we’re not remembering them in the sense of “do you mind the time…” We are calling to mind what their sacrifices achieved and reminding ourselves that a good deal of what we enjoy today is not of our own making. We have inherited it from others; it is not a time for boasting but for humility and gratitude.

But most, if not all of us, do remember someone who lived through those times. In my own case my grandfather, a private soldier in the Royal Irish Rifles; one of those professional soldiers in Lord French’s British Expeditionary Force which the Kaiser called “…a contemptible little army…” and although he was, in many ways, disillusioned by the War, he remained proud of being an “Old Contemptible”.

And of course the Second World War, which really was a war for civilisation and probably the most morally unambiguous war in the history of Europe; a fight for the soul of Europe. Except in the case of the Soviet Union, it wasn’t as costly in terms of military deaths as the Great War but was far more so for civilians. But today we don’t only remember the defeat of Fascism and a strange, revived form of autocracy in Japan, great as they were. We remember also in this country the rebuilding of post war society, by that same generation. A rebuilding along very different lines to the society that had gone before. And at its heart, as it still is, the National Health Service and Welfare State, and the multilateralism which underpinned a remarkably durable peace.

During the First World War a British Army chaplain, the Revd David Railton noticed a rough wooden cross over a grave. On it, scrawled in pencil were the words “An unknown British Soldier. The chaplain suggested that a memorial to the unnamed dead might be erected in Britain and in France. So, 100 ago, in 1920, for the first time ever, the body of a unknown soldier whose remains were found in Flanders were laid to rest underneath Belgian granite in Westminster Abbey. Official recognition of the value of every single human life.

This year Remembrance Day services and other ceremonies are on a very reduced scale and as we sit here today we may well be remembering the same service or ceremony this time last year with the sound of marching feet and loud, moving hymns and hoping we can do so again next year.

But quietness has its part to play in these events also, and the minute’s silence was no less moving today than in other years. In the Apocalypse when the Lamb who sits on the throne breaks the seventh seal there is a great pause of silence in heaven before the judgement begins.

And in this place it is impossible not to say “do you mind this day exactly 33 years ago” as we remember the victims and families of the Enniskillen Bombing, a barbaric act in any context and beyond the power of language to describe. Thirty–three years ago to the day when 11 people, everyone involved intimately in the life of their church and of this community, were murdered, as though they counted for nothing. Dozens of people injured. Hundreds left weeping with sorrow. Many still to this day with a hollowness in their lives which might be worked around but will never be absent. The legacy of our past, apparently a weary maze of such complexity that we have yet to find the path out towards healing and justice.

It is easy to call it a political failure but in truth it is as a whole society that we have somehow not been able to rise to the challenges which events like Enniskillen have required us to face. Please God some day we will.

This year I think we might also consider remembering all those people who have been taken from us by Covid–19 and their families, especially those who weren’t able to be with their loved ones as they moved entirely into the eternal world. That is very hard on people and it isn’t something that can be shrugged off. And I’m sure such families would also want us to remember and give thanks for those who were with their loved ones during their last hours, usually nursing staff. This pandemic has been much much harder for some than for many of us. Let’s not forget that.

When we remember, when we say, “Do you mind the time…” we also in some way take part. There is a special word in the church for that sort of remembering (anamnesis ) and it is used most often of the “remembering” element of the Holy Communion. “This do in remembrance of me”. It’s principal focus is on Christ’s “one, true, pure, immortal” sacrifice but in our modern services it stretches back to remembering the whole of creation when “he made us in his own image”. And so like that World War One chaplain we remember the value of every life.

But there is one sort of remembering which we haven’t considered so far, but which is frequently referred to in the Scriptures. And it is more powerful than all our human remembering.

“And God heard their groaning, and God remembered his covenant with Abraham, with Issac and with Jacob”. Of course it isn’t as though it had slipped from God’s mind and had just occurred to him again. It seemed to Israel often that God had forgotten them and they had to be reassured that he hadn’t. In fact usually it was the opposite which was true. Israel had forgotten God or was hiding from him.

And in those stories, when God is said to have remembered, he acted to redeem Israel. Nearly always he used natural phenomena or inspired specific people to come to the aid of his stricken people, just as now he inspires scientists and medical staff.

As it turned out the First World War wasn’t the war to end all wars. We know that the struggle between good and evil drags on but that the evil world will not win in the end because in the death and Resurrection of Jesus Christ it failed to win the only time it ever could. That in the Cross of the Son of God all the wickedness and sin of the world lost its chief weapon, death, which became the way to eternal life for millions in the Great War who we remember today, and for countless millions (a great multitude that no man can number) before and since. For His sacrifice and for theirs, thanks be to God.

I will finish with some words from the reading from Joshua, words addressed at that time to the new leader of Israel. In one sense they are words of conquest that sit much more uneasily with us today. But as they are looked at in the Spirit of Jesus Christ ( who took all of the cultural markers which had obsessed Israel; the law, the land, the Temple) and put them into a proper relationship to the universal and indefeasible love of God for all peoples, they remain God’s words to us. And today they can be heard by all in political leadership who are facing challenges which none of us onlookers can fully appreciate. Politicians who are trying to find a way to squeeze through the narrow gap between saving our lives and living our lives, an almost impossible task, given that “the facts” shift like a reef of sand.

And they can be heard too by those who have had heavy hearts for the past 33 years and also by those who are haunted by the face of someone they loved and whose hand they would have given their own life to hold as they slipped into the eternal world in hospital or in a Care Home.

These are the Father’s words to you:

“Be strong and be courageous. Do not be afraid, Do not be discouraged, for the Lord your God will be with you wherever you go”

So, in this month of remembering, remember he too remembers us.