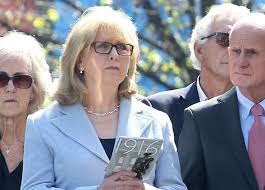 ‘Here’s the Story: A Memoir’

In a new autobiography, she describes how she grew “more and more disappointed in him” each time they met.

Calling him “cantankerous and caustic”, Mrs McAleese claims he deliberately tried to “irk any liberal Protestants” during meetings between church figures on sectarianism.

The comments are made in Mrs McAleese’s memoir, Here’s the Story, published this week.

Born in Belfast, Mrs McAleese served as Irish president from 1997 to 2011. She was Ireland’s second female president and its first from Northern Ireland.

The book includes details of her childhood in Belfast and her later journey into politics.

Some of the most eye-catching comments refer to her encounters with Fr Faul, the Dungannon priest, who died in 2006.

A former principal of St Patrick’s Academy, Fr Faul was renowned for his strident criticism of the Army, the RUC and the Provisional IRA. He was Catholic chaplain at the Maze prison during the H-Block hunger strikes in 1980 and 1981.

In the book, Mrs McAleese describes how she was selected to chair a working party set up in 1991 to address sectarianism.

The working group was made up of high-profile Church members from all the denominations.

Mrs McAleese recalls: “Over two years of often fractious meetings, the members got to know each other well, though not without being sorely tested at times.”

Describing discussions as “frank”, she adds: “Sometimes we were cut to the quick. We heard things, said things and learned things which offended: but we had come as believers in Christ and recognised that if we could not learn to listen in love and to trust each other then we might as well pack up and go home.”

She goes on state: “I made the most faithful friends in that group, people who later became instrumental in the Building Bridges project during my presidency. An exception was Father Denis Faul. I already knew him from previous encounters, and he had a high public profile as an arch-critic both of the IRA and of the British government.

“I had been looking forward to working with him at close quarters, but with every meeting I grew more and more disappointed in him. He was cantankerous and caustic; at times sexist and offensively sectarian. He never let a meeting go without emphasising that his objection to a united Ireland derived from wishing to maintain the integrity of a Southern Irish Catholic state untainted by liberal British Protestant secularism.

“He went out of his way to irk any liberal Protestants around the table, reserving a touch of misogynistic ire always for the blunt but never rude Carrie Barkley and especially for me.

“I was inclined to forgive him a lot, remembering how kind he had always been to my Aunt Bridget, but dear God, he tried our collective patience and my chairing skills.”

Separately, Mrs McAleese recalls a conversation during a 1998 car trip with the Queen, plus King Albert and Queen Paola of Belgium. The Belgians asked about the peace process, and it was noted that the DUP leader Ian Paisley opposed the Good Friday Agreement. “Who is this man Paisley?” Queen Paola asked. “I have never heard of him.”

The Queen is said to have replied: “Lucky You”.

‘Here’s the Story: A Memoir’ by Mary McAleese is published by Penguin Ireland.