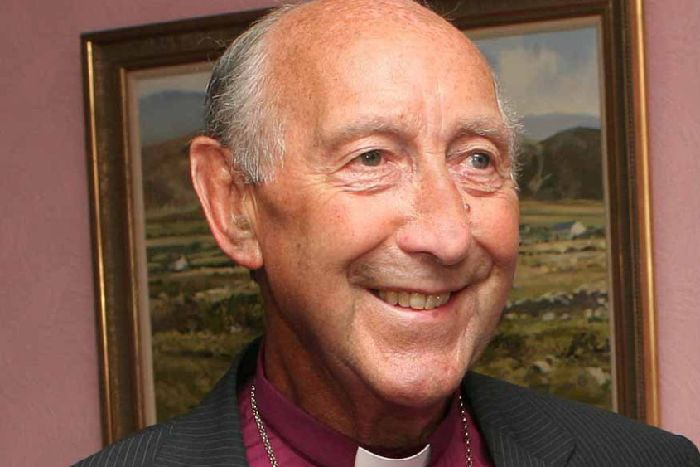 The funeral has taken place in Londonderry of Rt Rev’d Dr James Mehaffey, a former Bishop of Derry and Raphoe, whose friendship and joint peacebuilding with his Roman Catholic counterpart, the late Bishop Edward Daly, inspired many during some of the most violent years of the Troubles. 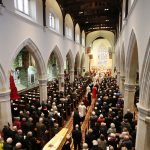 The Archbishop of Armagh, Most Rev’d Dr Richard Clarke, was unable to attend in person and Bishop Andrew Forster read out a tribute from Dr Clarke in which he described Bishop Mehaffey as “a powerful influence for good”.

“Of course, we all have our own individual memories of Jim,” the Archbishop said, “but all of us will recall with particular admiration his work – in company with Bishop Edward Daly – not only for peace but also for reconciliation in this city. Together they brought hope and light into communities where there was precious little of either. We all saw in Bishop Jim a gracious composure coupled with a steely resolve – the sense that this work for peace and harmony between communities so long divided was work for the Kingdom of God, and it would not be thwarted, from whatever quarter.”

The address during the Service was delivered by the Rt Rev’d The Lord Eames, another former Primate of the Church of Ireland. See report on this site.

Before the Service, Bishop Mehaffey’s wife, Thelma, their daughter Wendy and son Tim welcomed the many hundreds of people from across the community who had come to sympathise with the family in their loss. And Wendy read out a tribute to her father, during which she spoke of her love and gratitude to her “beautiful dad”.

She said her father’s love of people came into its own after he was appointed Bishop, as he sought friendships across the city. There was challenge in this role, Wendy said, but he remained steadfast in his belief and faith. “During his last spell in hospital,” she said, “there was a day when, in a moment of brilliant and characteristic clarity, Dad said: ‘One helps the other.’ May that be the profound message that we each take away from our gathering today.”

Bishop Mehaffey’s remains are reposing in St Columb’s Cathedral until this morning (Monday 11) when they will be taken to Belfast for cremation.