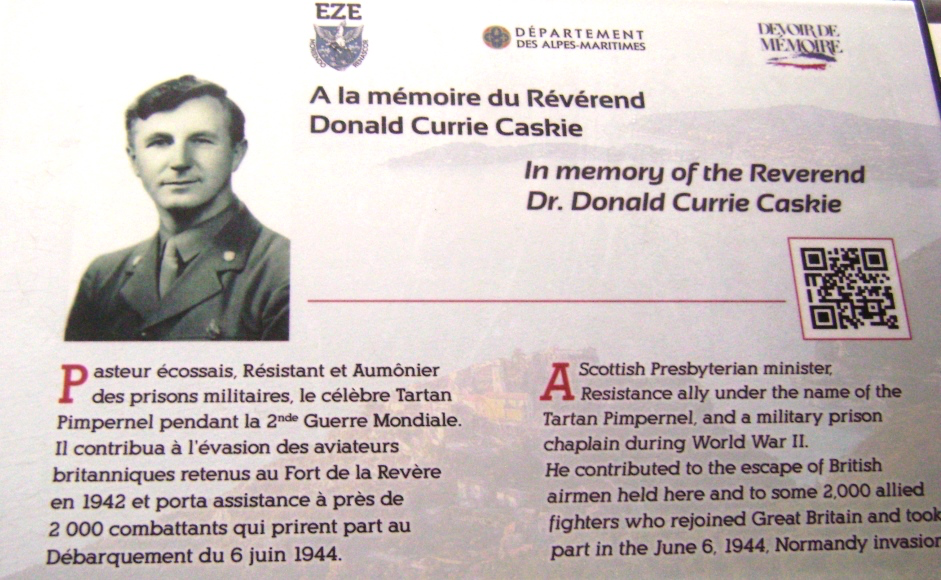 A Church of Scotland minister who helped prisoners of war escape a hilltop fort through a sewer system has been honoured in France.

A memorial plaque to mark the heroic exploits of Rev Dr Donald Caskie has been unveiled at Fort de la Revere near Nice.

He and his associates in the Resistance orchestrated the daring escape of RAF airmen under the noses of German soldiers and spirited 36 of them back to Britain in a submarine.

Known as the Tartan Pimpernel, Dr Caskie, a crofter’s son from Islay in the Inner Hebrides, helped save more than 2,000 men during the Second World War.

The plaque at the former military fort, which is located 2,283 feet above the village of Eze, was installed by an organisation called Le Devoir du Memoire which honours those affected by the war.

The minister’s nephew Tom Caskie attended the unveiling service along with around 100 people, including local dignitaries, and said he was “bursting with pride.”

The Edinburgh man said: “The memorial is simply wonderful and it was very emotional to see Uncle Donald honoured in this way and seeing the Saltire on display.

“He was a hero of the Second World War and is still remembered with affection for his time as the minister of the Scots Kirk in Paris and the things he did with the Resistance to save thousands of lives.”

Mr Caskie and his brother, Gordon, were presented with a commemorative medal to mark the auspicious occasion on 19 October.

The event featured Highland dancing, Scottish songs including a performance of the Ballad of Donald Caskie by Paisley school teacher, Gordon Whyte.

Dr Caskie, whose codename was Monsieur Le Canard – Donald Duck – was leading the Scots Kirk in 1940 when the Germans invaded Paris.

He refused to return to Scotland and fled to Marseille instead and ran a Seaman’s Mission, living a double life and passing the close scrutiny of the Vichy Police, and helped British and Allied soldiers to freedom across mountains into Spain. 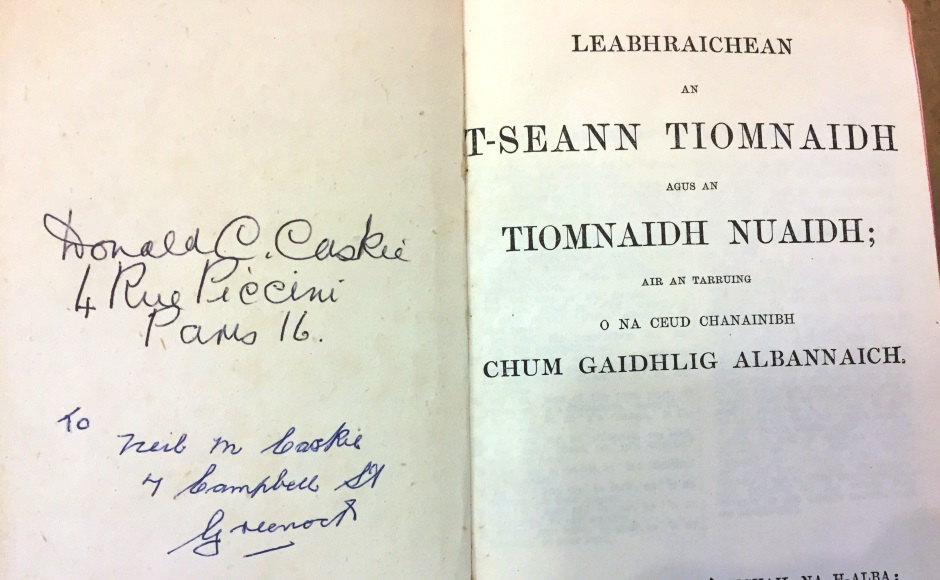 This Bible was used by Rev Dr Donald Caskie when he worked in France.

Dr Caskie was eventually recruited by British Intelligence officers and was told that his mission was the last link of a chain of safe houses that they had set up, which stretched from the beaches of Dunkirk in northern France to Marseille in the south.

This Bible was used by Rev Dr Donald Caskie when he worked in France.

The story of how he helped liberate prisoners from Fort de la Revere in 1942 is outlined in his book, The Tartan Pimpernel, which is described as “more thrilling than any adventure story”.

Dr Caskie was officially acting as a chaplain to the PoWs and one day he discovered an opening to a sewer behind a large bush near the fort.

He passed the information to his Resistance contact, General Sir Albert-Marie Guerisse who was codenamed Pat O’Leary.

Dr Caskie wrote that the entrance to the sewer inside the fort was in the boiler house and within 90 minutes, 36 men had escaped

“Another 22 men followed them, each ready to take his chance on making a solo getaway.

“Still more would have escaped but for a tragi-comic miscalculation involving a fat man, a squadron leader from the RAF, who got stuck in the tunnel.

“The poor man struggled furiously to get through the aperture and succeeded only in becoming more tightly wedged.

“Fourteen of the solo escapees were recaptured, eight got clean away.

“Not one of the submarine passengers was lost, all returned to England to continue the fight.”

Explaining why Le Devoir du Memoire honour people who resisted the Nazis, the organisation’s secretary Nicole Pinon said: “These men were heroes of the shadows who did not seek reward and only thought about whether or not they had done their duty.

“Our goal is to never forget and we are extremely happy to be participating in this event.”

Dr Caskie was suspected of being involved in the escape but managed to continue his secret activities undeterred for longer.

He was eventually arrested and imprisoned by the Gestapo and sentenced to death.

Dr Caskie’s life was only saved through the intervention of a German pastor and he spent the rest of the war in a Prisoner of War camp.

After the war, he returned to the Scots Kirk near the Champs-Elysees in the 8th Arrondissement where he stayed until 1961.

The war hero returned to Scotland and became minister of Old Gourock Church in Inverclyde and later Skelmorlie and Wemyss Bay North Church in Ayrshire.

He retired and after his death in December, 1983 he was laid to rest in the family grave at Bowmore on Islay.

Dr Caskie’s medals are on display at nearby Kilarrow Parish Church.

An exhibition, which includes Dr Caskie’s Gaelic Bible, is on display at the Scots Kirk and a large wooden cross gifted to the minister by George Watson’s College in Edinburgh hangs on the wall.

Rev Jan Steyn is the current minister and is passionate about ensuring the Tartan Pimpernel’s memory never fades.