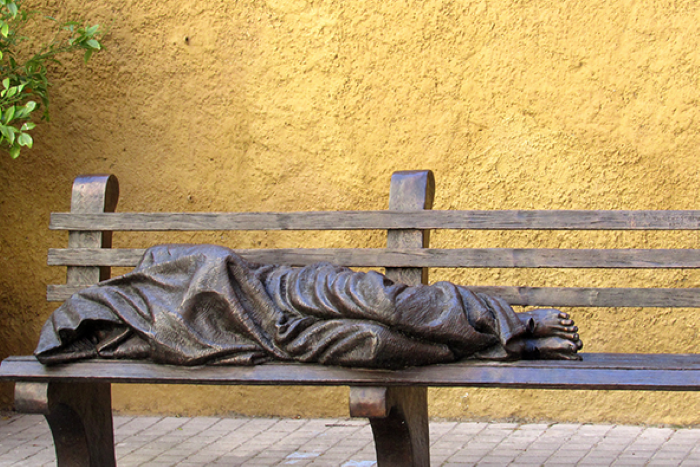 A controversial sculpture of Jesus, depicted as a homeless person on a bench, is to be a focal point for events marking the World Day of the Poor on 17 November.

World Day of the Poor will be marked at Christ Church Cathedral, Dublin, on Sunday November 17. The Homeless Jesus sculpture in the cathedral’s grounds will serve as a focal point for an act of remembrance and commitment as similar events take place around the world where other casts of the sculpture are located.

People will gather at the sculpture outside the cathedral at 3.15pm before the congregation is invited inside for Choral Evensong which will include an address by the Very Revd John Collins. People attending the service are invited to bring contributions of non–perishable food items which will be collected and donated to the Mendicity Institution.

The statue, by Canadian sculptor Timothy P. Schmalz, is serving as a catalyst for more than 50 cities around the world where public events raising awareness about poverty will be held.

“Homeless Jesus was always intended to challenge people’s views of the poor right in front of us,” said Timothy Schmalz. “I’m thrilled that it is going even further in inspiring others to take concrete action to serve them.”

The sculpture, which depicts Jesus as an all-but-anonymous homeless person curled beneath a blanket on a park bench, spent close to a year stranded in Schmalz’s studio after it was first cast, when two cathedrals passed on it and some local authorities refused to give permission for it to be installed.

In early 2013, the original sculpture was accepted and installed by Regis College, a Jesuit theological college in Toronto. The next year a model of the work was prayed over and blessed by Pope Francis and Jesus the Homeless began to be placed in cities across the United States.

The sculpture is a visual representation of Matthew 2 and depicts the Christ figure shrouded in a blanket with his face covered with the only indication that the figure is Jesus being the visible wounds on the feet. The life-size version of the work provides enough room for someone to sit on the bench and is cast in bronze.

There are now sculptures in many locations around the world from Singapore to Scotland and events on 17 November will include new unveilings of sculptures in Buenos Aires, Mexico City and Montreal, Canada, as well as a concert by a choir of homeless people in Indianapolis, a prayer service with a lunch for the homeless in Sydney Australia, and candle vigils in Chicago, Ottawa and Dublin.

In Manchester in England, where St Ann’s Church had the sculpture installed last year, the vicar Nigel Ashworth, said the church will be saying prayers on 17 November to tie in with the World Day of the Poor.

The city’s sculpture, positioned on a busy thoroughfare outside the church, is in the heart of Manchester’s shopping area and he said it continues to have a daily impact on passers-by and tourists.

“The response to the sculpture continues to be quite extraordinary,” he said. “It is the place where many of the city walking tours begin and is now a key feature on the tours. There are often groups of about 20 people standing around it on a daily basis.”

He said the sculpture was more than raising awareness about homelessness. “It’s about refugees also and poverty in general. It links with what we do as a church, when we invite homeless people into the building for breakfast and coffee or just to read the paper or listen to the radio every Friday morning.”

Talking about the sculpture becoming a global phenomenon he said, “It’s a unique idea because it speaks about a universal issue, with a sculpture that could represent any race or culture.”

The World Day of the Poor is intended to inspire people worldwide to greater service of the poor and marginalized.