Identity and Inclusion, Fear and Hatred – Rubicon 2019 Explores the Intersection 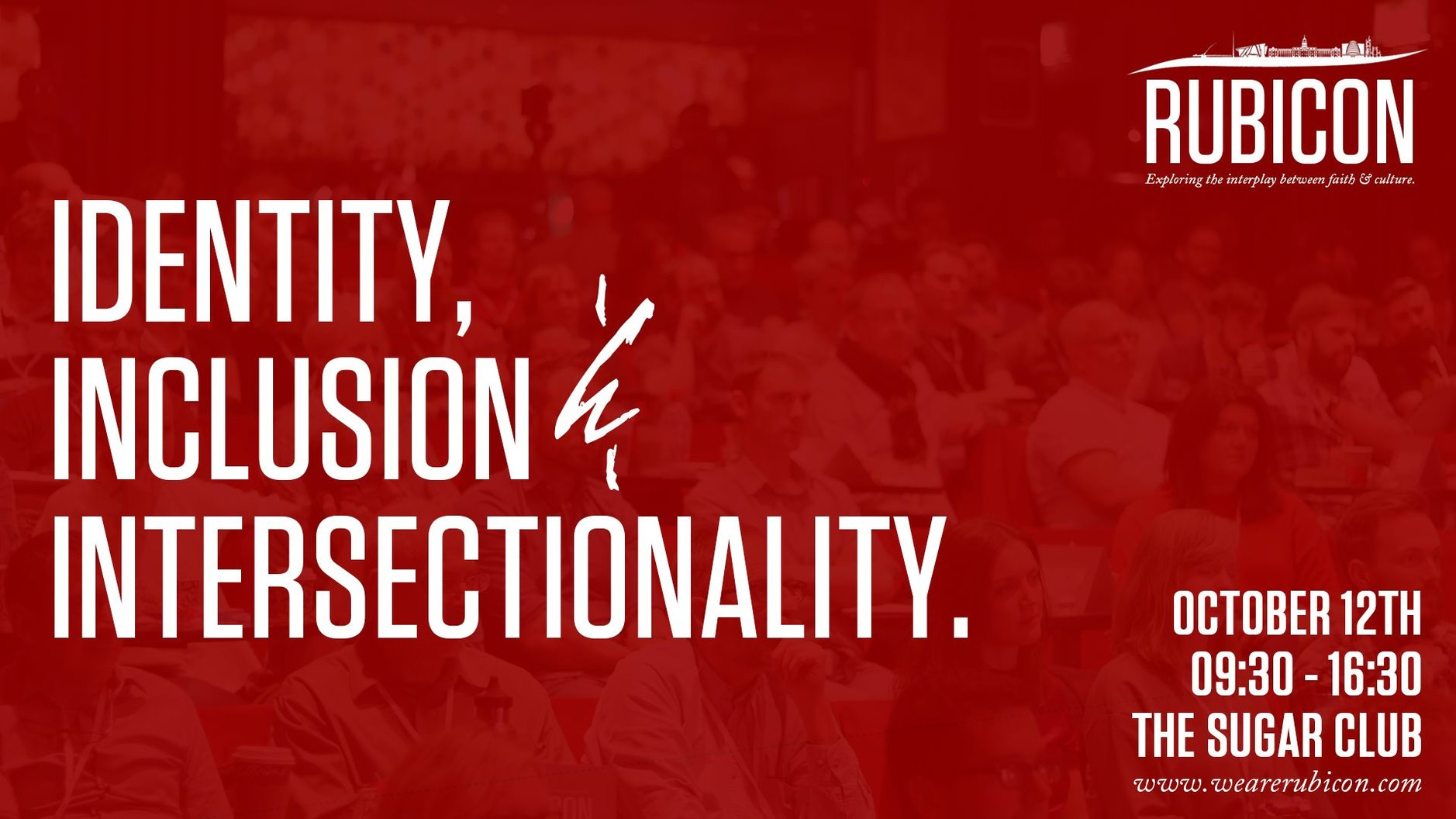 Fear and hatred of the other are increasingly shaping the world in which we live, leading to cries of ‘Build the Wall’ and ‘Send her home’, contributing to the imprisonment of over a million Uighur Muslims in China and to the genocide of the Rohingya in Myanmar.

Fear and hatred lead to mass shootings, to children in cages, and to the rise of dictators and demagogues around the world. On the island of Ireland, growing fear and hatred of the other leads to violence against mosques, to online and community harassment, and to riots, racism and stabbings against our neighbours and kin.

As Christians, we believe in a Kingdom of God that is for everyone, no exceptions, and yet we live a world that thrives on building and maintaining systems and structures that keep others out. This year at Rubicon we want to confront how the realities of identity and inclusion intersect with a world of increasing fear and hatred and to explore together who we are and who we are called to be.

This year’s guests include speaker, writer and activist Lisa Sharon Harper, social justice campaigner and equality advocate Dr Ebun Joseph and writer Antoinette Mushimiyimana. Many more will be announced over the coming weeks.

One of Rubicon’s organisers, Greg Fromholz, promised that Rubicon 2019 would be a real eye opener. “I expect to leave the Sugar Club with my world changed. I don’t say that to be dramatic. I genuinely feel that there is so much to learn from the speakers. Conversations have potential to be transformative,” he commented.

From Ferguson to New York to Germany and South Africa, Lisa Sharon Harper leads training and helps mobilize clergy and community leaders around shared values for the common good. A prolific speaker, writer and activist, Ms Harper is the founder and president of FreedomRoad.us, a consulting group dedicated to shrinking the narrative gap in the United States by convening forums and experiences that bring common understanding, common commitment and common action toward a just world. Ms Harper is the author of several books, including: Evangelical Does Not Equal Republican…or Democrat (The New Press, 2008), Left Right and Christ: Evangelical Faith in Politics (Elevate, 2011), Forgive Us: Confessions of a Compromised Faith (Zondervan, 2014), and the critically acclaimed, The Very Good Gospel: How Everything Wrong can be Made Right (Waterbrook, 2016). The Very Good Gospel, recognized as the “2016 Book of the Year” by Englewood Review of Books, explores God’s intent for the wholeness of all relationships in light of today’s headlines.

In 2015 The Huffington Post recognized her as one of “50 Powerful Women Religious Leaders to Celebrate on International Women’s Day.” Most recently, Relevant Magazine recognized The Very Good Gospel as one of “Six Books that Will Change the Way You See the World” and Ms Harper as one of “Seven Leaders to Follow in 2017.”

Dr Ebun Joseph is a race relations consultant, career specialist and life coach who addresses social justice issues and advocates for equality. She is a lecturer and coordinator of the first Black Studies module in UCD where she completed her PhD on ‘Racial Stratification in the Irish Labour Market’ and she is the author of two books, Becoming Unforgettable and the hard hitting novel, Trapped: Prison Without Walls.

Before working in academia, Dr Joseph spent nine years working with Business in the Community (BITC) as a Training & Employment Officer providing guidance to migrants from over 73 nationalities seeking access to access the labour market.

Much of her free time is spent on advocacy and empowerment work through community initiatives. She serves as CEO and seminar speaker for the the Unforgettable Women’s Network, is a columnist for the Dublin Inquirer on race, writes for the African Voice Newspaper, is a founding member of African Women Writers in Ireland and is chairperson of African Scholars Association Ireland (AfSAI). Recently, Dr Joseph launched the #NoToBrainWaste Campaign which highlights the barriers faced by under–employed and over–qualified migrants and Irish–born ethnic minorities.

Dr Joseph has unmatched insight into the lived experience of people of colour in Ireland and the organisers are delighted that she’ll speaking at this year’s Rubicon.

Antoinette Mushimiyimana has recently published her first book, This Is My Story, a first hand account of the Rwandan genocide and her life afterwards. Antoinette was born in Rwanda to a Tutsi family, with three younger brothers. In her book, she details how, on the morning after the genocide began in 1994, her father sent her and her brothers to hide from the Hutu. The Hutu began slaughtering the Tutsi following years of animosity between the two ethnicities, which spiralled out of control following the death of the country’s president. Antoinette hid in a latrine pit for three weeks, surviving on rain water, hiding from militiamen joking about killing and raping. She later found out her mother and brother and a hundred of her extended family were killed. After fleeing Rwanda, she decided to return as a missionary. There she met her father and visited one of her family’s killers in prison. She has now been able to forgive those who killed her family, which she says is a choice she made.

“Forgiveness is a choice, so I made that choice when I learned about forgiveness.”

More contributors will be announced soon. Go to
[wearerubicon.com]for up to date news on Rubicon 2019.