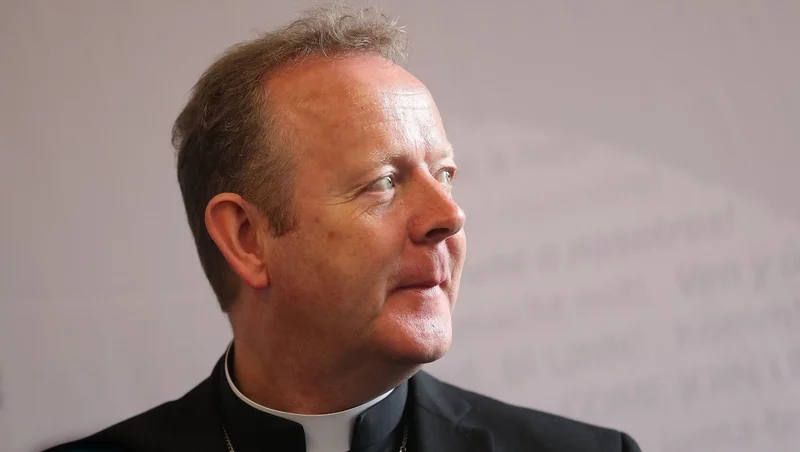 The leader of the Catholic Church in Ireland has warned that the ongoing absence of a Northern Assembly, increasing sectarianism and the looming presence of Brexit are causing Ireland and Britain to go through a period of dangerous political, social and economic uncertainty, writes Joe Little, Religious & Social Affairs Correspondent of RTE.

Archbishop of Armagh Eamon Martin told a gathering in Co Wexford this evening that, in the current factionalised political environment, it is vital that “church, civil society and government work together to preserve the fundamental concern for the common good”.

The Primate of All Ireland delivered his landmark remarks in the course of the Edward M Kennedy Lecture at the Kennedy Summer School in New Ross.

Addressing role of faith in politics in Ireland, Archbishop Martin welcomed Taoiseach Leo Varadkar’s recent calls for the building of a new relationship between church and State.

He observed that the church and the political community, whilst autonomous and independent of each other, would do well “in these troubled times” to talk and cooperate in the service of Ireland and the protection of humanity.

Recalling that in recent weeks, people had spoken to him of politics descending into a dangerous factionalism and of a weakening of confidence in the integrity of parliamentary democracy, he lamented the ongoing absence of a Northern Assembly, increasing sectarianism and the looming presence of Brexit.

He warned that these islands are going through a period of dangerous political, social and economic uncertainty.

“It is vitally important that church, civil society and government work together to preserve the fundamental concern for the common good,” he told his audience.

Archbishop Martin warned that faith and politics need each other in the face of a rising individualism on the island, which is often accompanied by growing disaffection and disillusionment with political and church leaderships.

Dr Martin predicted that the State would flourish if it was able to sustain itself as a “community of communities”.

But he warned that it would struggle if communities, like faith communities, who wish to play a full role in public life while exercising freely their spiritual, cultural, educational and charitable activities, find themselves unwelcome, forced to remove all their religious and cultural symbols from public spaces, or even made to retreat from public discourse altogether.

He cautioned that the marginalisation of faith communities from public life, especially in Ireland where the Christian faith is so deeply embedded in the culture, language, landscape and identity, would not bode well for the future of Ireland, and its people’s sense of who they are, where they have come from, and who they want to become in the years and decades ahead.

The Archbishop said that at best, aggressive secularism relegates faith to the privacy of our homes and churches and, at worst, “it tends towards intolerance and insists that in a democratic republic the default position should be no societal acknowledgment of God”.

“It sees the moral convictions of Christians in public life as automatically suspect, perhaps even illegitimate, because they are advanced by believers,” Dr Martin told his audience.

“In this context, people of faith who draw upon objective moral norms in certain matters can be portrayed as unjust, prejudiced, and as a threat to individual freedom and autonomy.”

He praised what he called “healthy secularity” for recognising a distinction between church and State, while allowing “the space for Christians to intervene in public debate and to make their arguments as brothers, sisters and friends alongside those of all faiths and none”.

“After all, the promotion of fundamental moral values is not confessional per se,” he noted.

“These values are defended by the church precisely because they are human even before they are Christian; they are rooted in the natural law and accessible to reason. They are views that can be shared by all people of good will.”

In a clear reference to the debates on legalising abortion north and south of the border, Archbishop Martin also warned Catholic politicians that they must oppose laws and policies that would violate the life and integrity of any person, from conception to death.

He said Catholics in general are bound to give a consistent witness to the irreplaceable role of the family based upon heterosexual marriage and to the right of parents to educate their children in accordance with their faith and belief.

Recalling the late Saint John Paul’s passionate appeal in Drogheda 40 years to people engaged in the violence of “The Troubles”, he said the late Pontiff said that on his knees he begged them to turn away from the paths of violence and to return to the ways of peace.

Dr Martin said that, regardless of the impact of that appeal, the Polish Pope’s tone exemplified the best way in which faith can speak in the political sphere “with confidence, courage, clarity and challenge, but also with humility and prayer – recognising that not everyone will … be prepared to listen”.

He quoted Pope Francis’ message to lay believers that “an authentic faith … always involves a deep desire to change the world, to transmit values, to leave this earth somehow better” than they found it.

Dr Martin said that bringing faith to politics was “not an optional extra for a committed Christian”.

He added that Catholics “rightly feel ashamed and repulsed by the horrific revelations of child abuse and other shameful episodes where the reputation of the church was put before the compassionate call of the gospel to protect the vulnerable and reach out to the marginalised”.

He said that faith is no mere private affair, but entails a social duty to help protect humanity’s future, adding that the church “cannot and must not replace the State”, and recognises the reality of secularisation.

Archbishop Martin recalled that President John F Kennedy, in his inaugural address, identified as a defining issue the belief that the rights of man come not from the generosity of the state but from the hand of God.

“He was undoubtedly recognising that the dignity of man is rooted in his creation in the image and likeness of God,” he said.

“Such rights therefore have their basis in the natural and divine law. This is the crux of the church’s concern today – that the State does not promote an erroneous understanding of the human person through, for example, introducing laws that permit the destruction of innocent human life.”
Published on RTE web site Thursday, 5 Sep 2019