Ireland honours two religious sisters for their work around the world 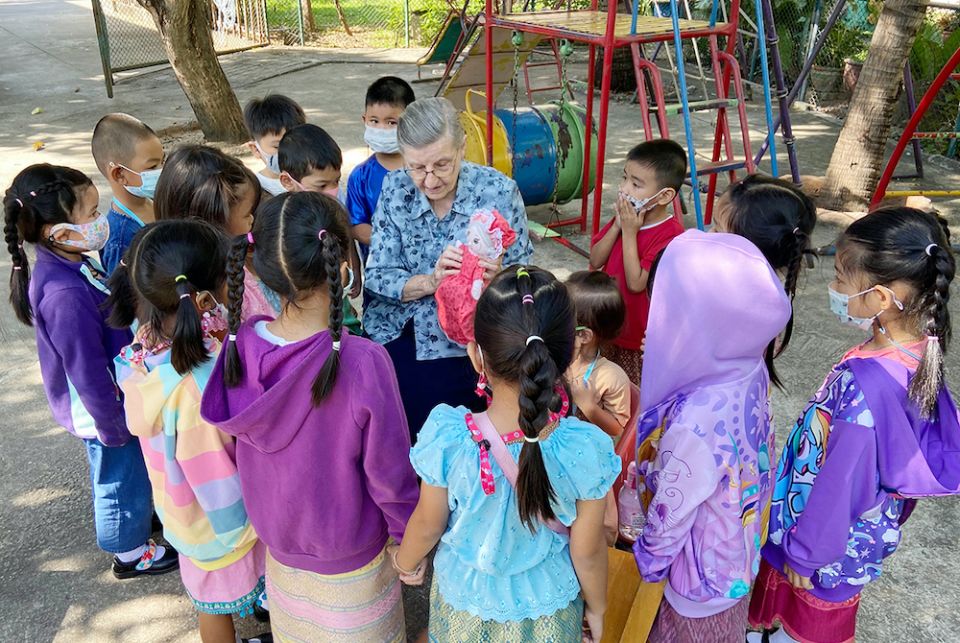 Photo above – Good Shepherd Sr. Louise Horgan with children at the Fatima Self Help Centre in Bangkok, Thailand.

Two religious sisters are among the 14 people who will receive Presidential Distinguished Service Awards for the Irish Abroad this year.

The award is the highest honour for Irish people living overseas, and the 2020 list sees Loreto Sr. Patricia Murray and Good Shepherd Sr. Louise Horgan named alongside award-winning actress Fiona Shaw and the late soccer star Jack Charlton, who as the Republic of Ireland’s manager brought the Irish national team to two World Cups and one European Championship.

“Each of these individuals have made a remarkable contribution to Ireland and to our international reputation,” Minister for Foreign Affairs Simon Coveney said in announcing the recipients Nov 6. “I am deeply grateful for their service and commitment to this country.”

Michael D. Higgins, the president of Ireland, is expected to present the awards during a virtual ceremony in December.

Murray of the Institute of the Blessed Virgin Mary, also known as the Loreto Sisters, has been recognized for her work in peace, reconciliation and development. She is currently secretary of the International Union of Superiors General (UISG), the Rome-based worldwide canonically approved organization of superiors general of institutes of Catholic women religious. 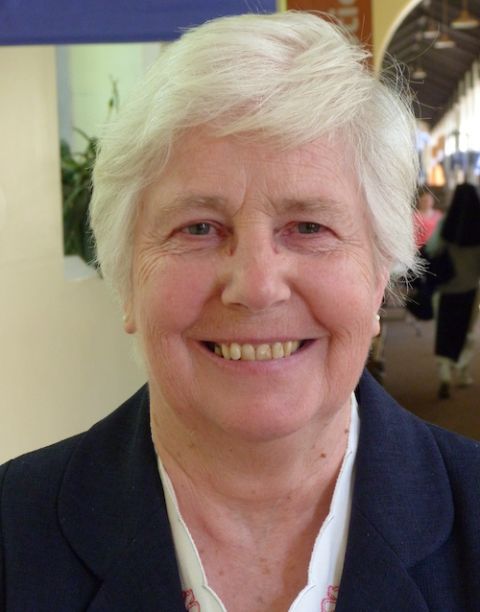 Sr. Patricia Murray of the Institute of the Blessed Virgin Mary

Pope Francis appointed Dublin-born Murray as a consultor to the Pontifical Council for Culture last year. Prior to her appointment as secretary of UISG, she was the founding executive director of Solidarity with South Sudan, an umbrella organization set up to foster collaboration among over 100 religious orders to rebuild the educational, medical, agricultural and pastoral infrastructure of the new African state.

In a statement, Murray said she was “humbled” by the award because “one never acts alone. In accepting it, I acknowledge all those who are truly part of this award: my IBVM (Loreto) sisters, family and friends, many colleagues and collaborators. In particular it honors the many sisters from Ireland and elsewhere whose faithful quiet service and commitment makes a difference in the lives of so many.”

Murray first came to prominence in Ireland in 1986 following the death of six Loreto Sisters in a fire at Loreto Secondary School at their St. Stephen’s Green convent in Dublin, a school she had attended herself. She was 39 and principal of Loreto College Crumlin Road in Dublin.

“I was woken at 5am in the morning and asked to come in and speak to the media as I had worked in the Justice and Peace Commission and had some experience in media,” she told the Catholic Herald in 2013.

In the midst of the shock and outpouring of grief, she was a calm and reassuring presence. The phoenix would rise, she underlined, and it did: The school is one of the top schools for girls in Ireland.

In 1998, she was elected to the general council of the Loreto order and was based in Rome. During her term of office, her home province of Ireland made the decision to make a new foundation in Rumbek in South Sudan, building the first secondary school for girls in Lakes State in 2006.

She herself led Solidarity with South Sudan, which worked to address the vacuum in educational and health infrastructure that had been devastated by decades of civil war with its mainly Muslim northern neighbor, Sudan.

In 2019, Murray gave the keynote address to over 700 sisters at the annual assembly for the U.S. Leadership Conference of Women Religious. She told the assembly that even while sisters work locally, they must think globally, both about the people they serve and themselves.

“Being truly present to one another, being open to a mutual encounter with the other who comes as a stranger, is a prophetic act in today’s divisive contexts,” she said. “Today, the local people call the sisters in the UISG communities ‘Le Suore del Mondo,’ ‘the Sisters of the World.’ Perhaps that is our new calling?”

“We know that the presence of God is all around us and that we are connected to each other through ties both visible and invisible,” she said. “We need to have global conversations.”

Horgan, a Good Shepherd Sister, has been working for over 50 years to empower vulnerable women and children in Thailand. She is a founder of Fatima Self Help Centre in Bangkok, a nonprofit organization dedicated to helping women and girls break out of the cycle of poverty by earning money at the craft center. The center also provides adult education to those who did not have the opportunity to go to school.

The center’s programs have expanded over the years beyond the initial craft work project and now include:

a home for single mothers;
preschool for children from the slums;
adult education and skills training;
a live-in program for at-risk teenage girls;
school sponsorship for those in the community; and
a refugee education program.

A day care center looks after the women’s children as they attend classes. From 2014 up to the outbreak of the COVID-19 pandemic, the center had been taking care of the children of over 200 refugees from places like Afghanistan, Syria, Pakistan, Iraq and Vietnam.

“As needs came to our notice, we have responded appropriately, ” Horgan told Global Sisters Report via email from Bangkok, where she was on retreat.

Before the Fatima Centre was formally established, Horgan and other members of her community held discussions with women in Bangkok’s slums to learn where help was most needed.

“They begged for dignified work, to be trained in ways by which they could help themselves and they jumped at the idea of sewing and dressmaking,” she wrote to GSR. “We soon learned that Thais are artistic by nature and proved capable of acquiring skills quickly. The center started in a shed behind the local Fatima Church in 1978 and the center in its current location, began in 1980.”

Helping women access education and break out of the unending cycle of poverty is at the heart of Horgan’s outreach in the Thai capital, which she said is a “huge metropolis.”

Young women from rural communities in other provinces arriving in Bangkok seeking employment with no family unit or social network “can easily be lost,” she said, adding, “anonymity destroys them.” In addition to skills training and employment offered by the Fatima Centre, the women also get a sense of empowerment and feel they belong to a community.

Over the years, as many as 150 women have worked in the center at any one time, and the money earned helped them meet their basic needs and those of their families, such as paying for rent and electricity and water bills.

“From the beginning of our mission in Thailand, we have been all inclusive. Ninety-nine percent of our project participants would be Buddhist, but we welcome unconditionally all faiths. At this time in our world, there is no place for any form of exclusivity.”

Horgan said she hoped more people would learn about the work of the Fatima Centre in Bangkok and place orders for its crafts or assist it in other ways. Horgan said the pandemic has increased the risks to women because of the loss of employment and a range of social problems that have emerged in many families.

The 86-year-old missionary said she was grateful for the presidential award, “not for any personal accolade, but for the fact that it is an honor for our Congregation and it highlights the plight of those with whom I’ve been working — tells their story and hopefully raises them up.”

Sarah Mac Donald is a freelance journalist based in Dublin. Soli Salgado, a GSR staff writer, contributed to this story.