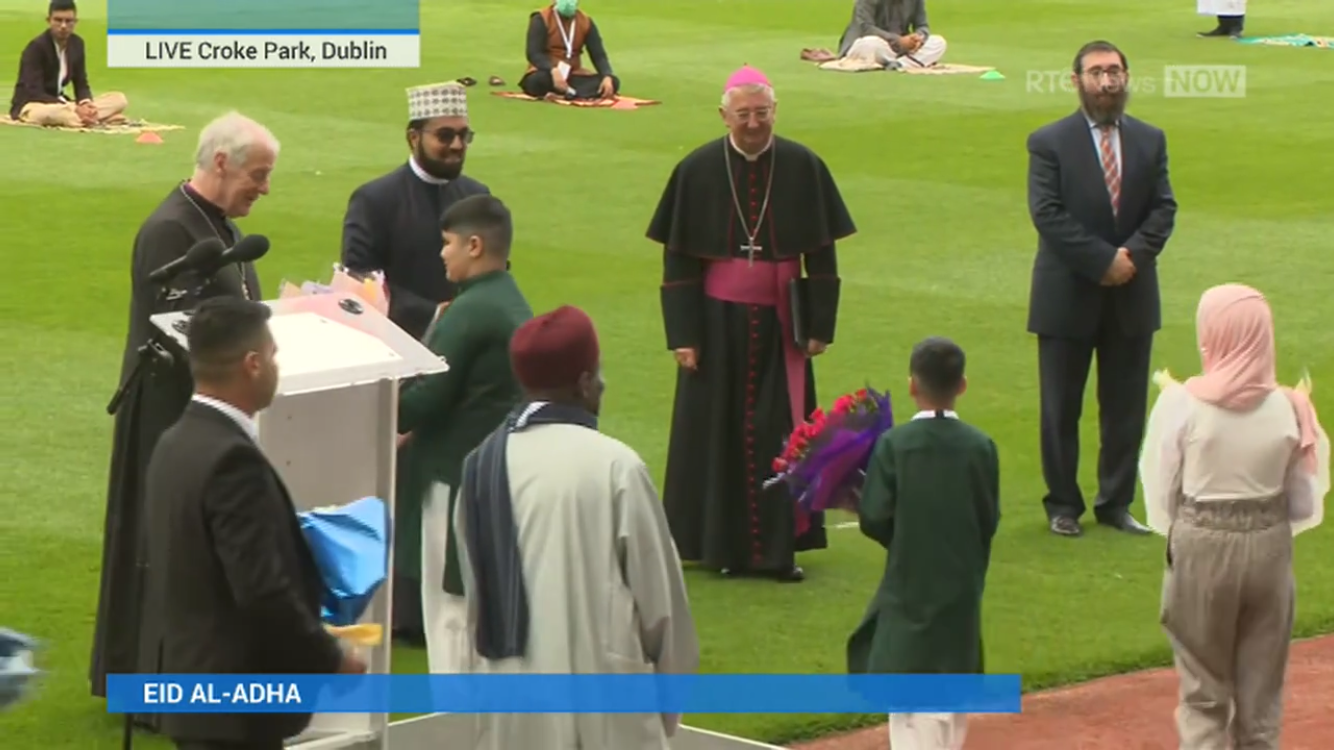 The Church of Ireland Archbishop of Dublin, the Most Revd Dr Michael Jackson, was among the Abrahamic Faith leaders and Government officials attending Eid Al Adha 2020 at Croke Park yesterday morning, Friday July 31. The text of a short reflection he delivered is as follows:

“Before I say any more, I should like to thank the Islamic Community, Shayk Umar al-Qadri, Croke Park and the GAA for inviting me to participate in Eid al Adha today. This is a truly historic occasion. I wish all Muslims: Eid Mubarak. I echo the call to peace and harmony that is the lifeblood of faith itself and the calling of all Faiths worldwide.

“One day earlier this month, the electricity went off suddenly in my house. It was a short power outage in the locality. In the silence, I heard only the silence. And then suddenly I heard the humming of the fridge, the first sound of a revived electrical life. Our world today is rather like this: looking and listening for signs of life revived in challenging and challenged circumstances day in, day out.

“We continue to live in a global pandemic that has affected us all and some much more tragically than others. For Faith traditions, as for everyone else in Ireland, The Lockdown left us in a position where we could not gather. In specific instances, this meant a virtual Ramadan, a virtual Passover and a virtual Easter. This was the sound of silence. It had many spin-offs for communities and for individuals who are still in the process of working through the consequences and coming to terms with the old and the new expectations that now rub uneasily alongside each other in counterpoint more than in harmony.

“What, we might rightly ask, were the sounds of life that crept into this silence? The greatest was undoubtedly neighbourliness. The unknown person next door became a neighbour. Care quickly began to go both ways. While many of us had been taught from our youth that it is more blessed to give than to receive, we all learned the positive lesson of humility and of Otherness to the effect that it is just as blessed to receive as to give.

“The great word that the Minister for Health, Simon Harris TD, put on the national kitchen table in the early days of the coronavirus was: kindness. This is, for us today, a fresh way to connect the future with the past. Kindness is a truth of every Faith. Kindness is an act of every faithful person. The hospitality of humanity encompasses the person acknowledged, the goodness offered, the listening ear and the intuitive look. Many have died tragically, horribly and alone. Many have had no option but to let their home become a combination of office and school where privacy is eroded and boundaries dismantled. And yet many have learned that kindness is a boomerang of love and of hope. We have all learned that our religious faith and our civic duty work together and need one another to make social sense. We have all learned that the phrase: ‘Catch you later …’ is not in fact a greeting. Time is in our hands. And now is the time of our faith if we are to build together a society where all are different and yet all are equal.”

RTÉ to broadcast service from Down Cathedral

Sunday Worship on the RTÉ News Channel on 2nd August, the eighth Sunday after Trinity, at 2.00pm, will be a Service of Holy Communion recorded in Down Cathedral. The Officiant and Preacher will be the Dean of Down and Rector of the Lecale Area Mission Partnership (LAMP, the Parish Group of which the Cathedral is a part), the Very Revd Henry Hull, assisted by LAMP’s Vicar, the Revd Adrian Dorrian, and Part Time Stipendiary Curate, the Revd Julie Bell.

The Revd John Redmond in 1920s Belfast – Archive of the Month

Marking the 100th anniversary of the Belfast Riots, Prof Brian M Walker, Professor Emeritus of Irish Studies, Queen’s University Belfast, in collaboration with the Representative Church Body Library, Dublin, has produced a timely piece on the bridge-building contribution of one Church of Ireland cleric which is the online August Archive of the Month.

The Revd John Redmond was a well-known figure in the columns of the Church of Ireland Gazette in the 1920s. He was vicar of the parish of Ballymacarrett in East Belfast, 1920-1929, with its church dedicated to St Patrick, and spiritual home to more members of the Church of Ireland than any other parish in the country. Born in County Armagh in 1876, Redmond served as a chaplain with the 36th Ulster Division. He ministered to the mortally wounded Capt. Willie Redmond MP, brother of John Redmond (no relative) in his last hours at Messines in 1917. He was instituted as vicar of Ballymacarrett in February 1920.

Sectarian riots broke out in Belfast in the summer of 1920. On 3rd September, the Gazette observed how ‘since the troubles began in Belfast Mr Redmond had been in the thick of the disturbances’. In July and August he went onto the Newtownards Road in East Belfast to stop rioters and organised bands of unarmed volunteers to prevent rioting and looting.

On 13th May 1921, the Gazette noted that Redmond had ascertained that there were at least 15,000 nominal Church of Ireland people in the parish, but many did not attend church. To meet this challenge, he engaged new staff and organised Sunday schools and branches of young people’s organisations. In March 1922, Redmond reported that there were many who ‘on account of the condition of their clothes would not come to the parish church’. To reach these people, Redmond organised the erection of mission halls. Poverty and unemployment were deep concerns for Redmond and his staff. During the coal strike and general strike of 1926 orders for groceries were given out weekly to over 300 families, while at the soup kitchens in St Patrick’s School 3,000 meals were distributed weekly.

In late 1928, the Gazette published a letter from Redmond, appealing for funds and expressing a wish that other church members might ‘adopt’ one of the mission districts. This appeal won an immediate response. He received financial contributions from all over Ireland. In Dublin a committee was formed under the Bishop of Meath, Dr Orr, to establish the Southern Church Mission to Ballymacarrett. Funds were raised to build a new church. On 8th April 1933, St Martin’s church, off the Lower Newtownards Road, was consecrated by the Bishop of Down, but the appointment of the incumbent lay with the Bishop of Meath.

The current Rector of Ballymacarrett, the Revd John Cunningham, said: “In subsequent years after Redmond’s time, although many parishioners moved out to the suburbs of Belfast and Bangor etc., a faithful core remains. Two new worshipping communities, a food-bank, and youth teams work from the three church buildings, caring for the wider community, and carrying on the legacy of love so clearly laid down by the Revd John Redmond.”
See –
www.ireland.anglican.org/library/archive 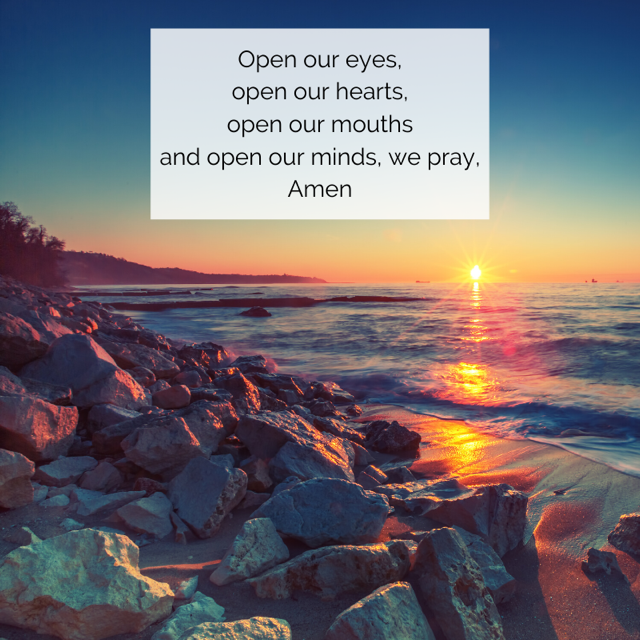 For young adults their first experience of independence, finding a job, maybe living away from home, should be fun and positive. Where the current situation has limited their options and brought extra anxiety we pray for peace and practical provision – Mothers Union

Today we pray for countries where hunger looms. Closed borders, curfews and travel restrictions have disrupted food supplies and incomes pushing millions of people towards hunger. We pray for your provision and for worldwide effort to prevent a global hunger crisis. 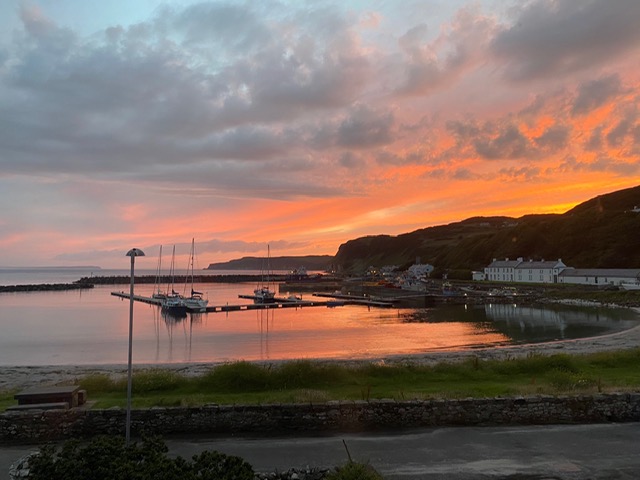