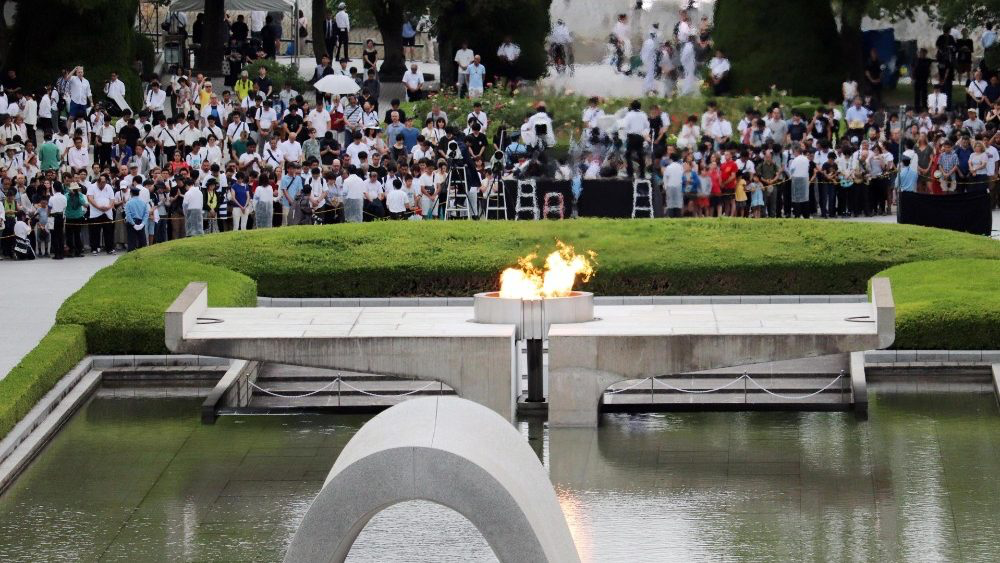 Photo – The event at the Hiroshima Peace Memorial Park on the 74th anniversary of the dropping of the atomic bomb.

On the 74th anniversary of the nuclear bombs on Hiroshima and Nagasaki, Hiroshima’s mayor and bishop have called for working for peace and nuclear disarmament.

The Catholic Church of Japan is commemorating the 74th anniversary of the dropping of the atomic bombs on Hiroshima and Nagasaki, with prayers and appeals for a future of peace and nuclear disarmament.

“Together with the faithful of my diocese, I am deeply grateful to those who offer their prayers and activities for peace in the world, on August 6 and 9, on the 74th anniversary of the atomic bombing of Hiroshima and Nagasaki,” Bishop Alexis Mitsuru Shirahama of Hiroshima told AsiaNews.

“I feel that this is an important moment to pray and work together for peace and denuclearization, in evoking these memories,” he said, as the Church in Japan is marking its annual “Ten Days for Peace”, August 6-15, in commemoration of the tragedy and its victims.

On Tuesday, Mayor Kazumi Matsui delivered a peace address, raising concerns about the rise of self-centred politics in the world and urging leaders to steadily work toward achieving a world without atomic weapons.

“Around the world today, we see self-centred nationalism in ascendance, tensions heightened by international exclusivity and rivalry, with nuclear disarmament at a standstill,” Matsui said in his peace address at the Hiroshima Peace Memorial Park.

With some 50,000 people and representatives from about 90 countries in attendance, Hiroshima’s mayor urged the younger generations never to dismiss the atomic bombings and the war as mere events of history but think of them as their own, while calling on the world leaders to come and visit the nuclear bombed cities to learn what happened.

The Hiroshima anniversary ceremony came hours after North Korea launched suspected ballistic missiles in its fourth round of recent weapons demonstrations. The activity follows a stalemate in negotiations over its nuclear weapons.

In his remarks to AsiaNews, Bishop Shirahama also addressed the problem on the Korean peninsula, hoping for a faster realization of the agreement reached this year between North Korea and the United States on denuclearization.

“I continue to pray to God and to offer everything that can be done every day, with God and with all the people who share the same intention,” he said.

Pope Francis said in January he would be visiting Japan in November, though there has been no official confirmation of the trip. It would be the first papal trip to Japan in nearly 39 years since Pope St. John Paul II visited the country in February 1981.

The Japanese Catholic Church’s “Ten Days for Peace” was the response of the Catholic Bishops’ Conference of Japan to Pope John Paul’s appeal at Hiroshima on 25 February 1981.

A similar appeal is expected from Pope Francis in Hiroshima and Nagasaki during the proposed visit.

In a message for this year’s “Ten Days for Peace”, released in July, the Japanese bishops are appealing for peace which they say is the fruit of the integral development of all people.

“International peace and stability cannot be based on a false sense of security, on the threat of mutual destruction or total annihilation, or on simply maintaining a balance of power,” the Japanese bishops say, citing the address of Pope Francis on 25 September 2015, to the United Nations General Assembly.

“Peace must be built on justice, on integral human development, on respect for fundamental human rights, on the protection of creation, on the participation of all in public life, on trust between peoples, on the support of peaceful institutions, on access to education and health, on dialogue and solidarity.”

The bishops pledged to unite with Pope Francis in praying that they be able to build peace by being deeply involved in the integral development of all while seeking the realization of the abolition of nuclear weapons.