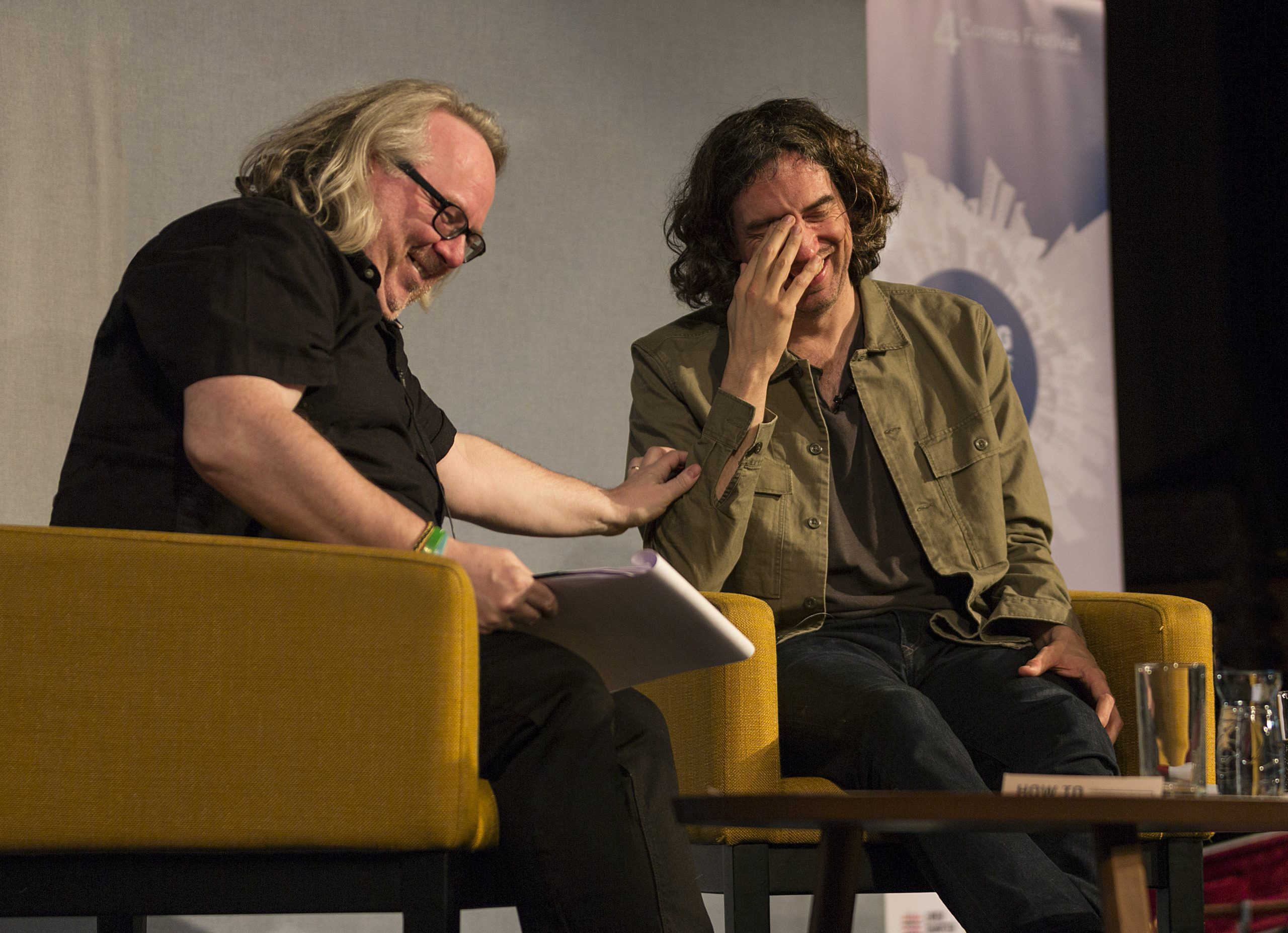 Photo above – Snow Patrol star Gary Lightbody in conversation with Rev Steve Stockman at the opening event of the 8th 4 Corners Festival in Fitzroy Presbyterian Church. Picture by Bernie Brown

The hundreds of people who packed into Fitzroy Presbyterian Church, Belfast last night to see and hear rock icon Gary Lightbody in conversation with Rev Steve Stockman – and enjoy some of his songs too – were treated to one of the most memorable opening nights in the festival’s history, Martin O’Brien reports.

The theme of the 4 Corners Festival this year is “Building a City of Grace”.

How fitting then that our star in Fitzroy turn exuded grace in his demeanour and delivery from start to finish, staying on for two hours after the show ended – through the Brexit hour until 1130 pm – to greet fans personally and have a chat with each of them.

The audience had eavesdropped on an enthralling conversation in which Lightbody evinced a nice mix of humour, humility and candour in response to the well prepped Stockman’s gentle probing about his upbringing in Bangor during the Troubles, his years at Campbell College, his taking leave to Scotland for many years and the ups and downs on his trajectory to stardom.

A straw poll of patrons revealed a common theme.

“Gary is just dripping in authenticity,” said one.

“He is just so genuine, so honest,” opined another.

“He may be a rock star but he’s so down to earth and humble,” another admirer said.

Many had made the journey to Fitzroy for more than the promise of music alone and they were not disappointed. Some had come long distances including a Belgian couple who booked the moment they had heard about it and a fan from Waterford.

His songs – he started with the particularly evocative “I Think of Home” – received prolonged applause.

No one was surprised by the quality of his voice or his guitar playing.

Everyone knows that he is a world class song writer and artiste and that Snow Patrol sells albums by the bucket load around the globe.

But few have seen him in person or ever heard him in conversation.

The audience were spellbound.

He says he is a shy person but his easy quick wittedness and direct engagement with the audience was a big feature of the evening. 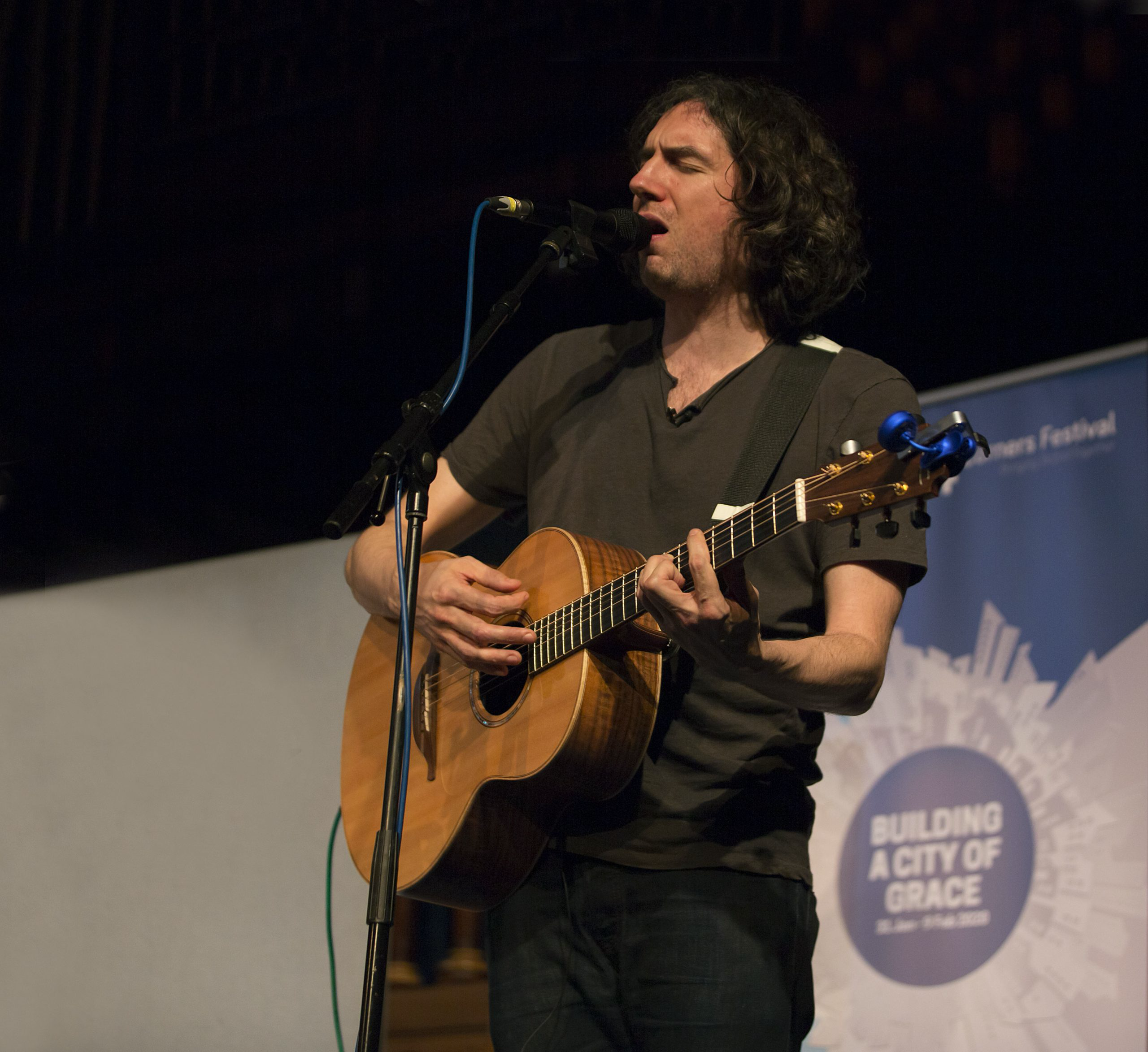 Several times he responded comically and with perfect timing to the interjections of a baby.

In response to Stockman’s informed and illuminating questioning he talked about the significant influence of Seamus Heaney on his song-writing.

There was much more in an evening that no one wanted to end.

Stockman asked him about why he wrote “Take Back the City” and Lightbody explained how it was about telling us that Northern Ireland is in a better place and it is here for all of us.

He was both frank and funny about the problems he has had with drink.

And while stressing he is not promoting himself as an expert, he spoke in a heartfelt way about mental health issues and the alarming incidence of suicide which he said he couldn’t help linking it to “a shared trauma” that we know all about.

The new generation is not immune from it and will have “heard the whispered conversations of parents about what we have been through.”

Lightbody spoke touchingly about how he likes to celebrate the good things that happen in the island of Ireland.

“This has nothing to do with religion or politics. We have a bond with music, it connects us whether we are Catholic or Protestant”.

Given the theme of this year’s festival it was not surprising that Steve Stockman asked Gary Lightbody about grace and references to it in songs that he has written.

Not least in “Chasing Cars” where he has written:

I need your love

To find my own.

This is your grace

And I don’t know why

Asked what grace means to him Lightbody pointed to other people than himself who are leading better lives and have made better choices.

Steve put it to Gary that he is being too hard on himself but Gary would have none of it, and said he admires the grace he sees in people who have had a very hard time and who benefit from some of his charity work.

It was a very humble response from a man who brought grace to our festival and is in the business of making his contribution to the goal of Building a City of Grace.