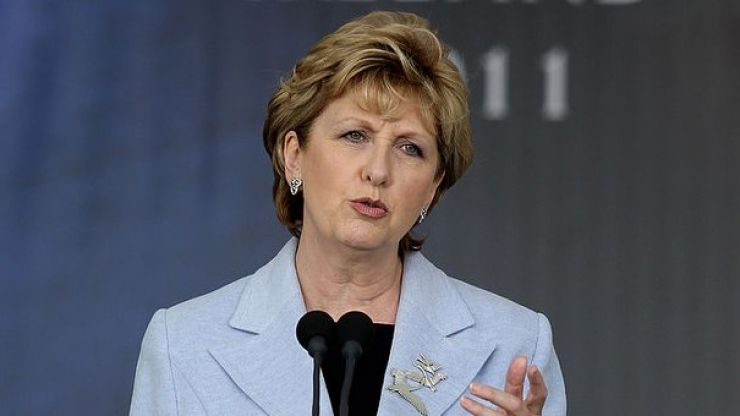 The former Irish President warned of the damaging impact the church is having on Ireland’s younger LGBT community.

Former President Mary McAleese has described the Catholic Church’s teachings around homosexuality as “intrinsically evil” and amounting to homophobia, suggesting it “empowers the homophobic bully”, Conor McCrave reports on The Journal.ie

The Belfast-born law lecturer who served as President of Ireland for two terms between 1997 and 2011 has long been vocal about LGBT rights and the influence of the Catholic Church in Ireland.

In a podcast interview with David Watters ahead of last weekend’s Pride celebrations, McAleese reiterated her concerns for the impact the Church has had on members of that community before and after decriminalisation of homosexuality in 1993.

“The Church’s teaching on homosexuality is ignorant, it is unreconstructive in the life of science, it’s sad to say. It has never been looked at in the light of the new sciences and it’s not only a pity, it’s worse than that,” she said.

“Look at the language that is used – ‘the homosexuality is disordered’. Who wants to believe that their God-given nature is disordered? That homosexual acts, how they express their love in a loving relationship, for example… that that is regarded as intrinsically evil. I don’t think so.”

McAleese was also critical of the Vatican and Pope Francis, who many see as a more progressive and open-minded Pope than his predecessors, but added some bishops and cardinals across Europe have begun a more positive conversation around the approach of the church to the LGBT community.

“Certain bishops, particularly in Germany and certain cardinals have been champions in this regard, and I think I see in them the green shoots of a future open debate, but let me go back to Francis.

“Alot of people will say ‘Oh wasn’t it wonderful when he said who am I to judge’. Well I was not at all impressed by that, I was angered by it because he does judge. He is the supreme judge of the Church. He is the legislator, he is the judge. If there is something wrong with the law, the only way it can be changed in the Church is if he changes it.

The 67-year-old also spoke about her own self-education and motivations to become a vocal supporter of LGBT rights as far back as the 1970s.

“I’ve always been human rights conscious and civil rights conscious, that’s why I did law. You know, a Catholic from Belfast, that’s our thing and so when I came to Trinity in ’75, I moved to Trinity and took up a job there as a law lecturer,” she said.

“One of the first friends I made there was David Norris and we got chatting and one of the first debates I ever attended was on LGBTI rights… David and I got together and chatted about [it], we’re talking about a time when homosexual acts were criminalised, can you imagine the impact of that on people.

“The one thing I knew was there was something seriously wrong here. In all my life, I’m happily married here for over 40 years to the man that I met when I was 17, I’ve never been attracted to another women.

“I’ve only been attracted to men, not a whole lot of men incidentally… and I remember saying to myself ‘what must it be like to be attracted to another human being and to know that you can’t go there’.”