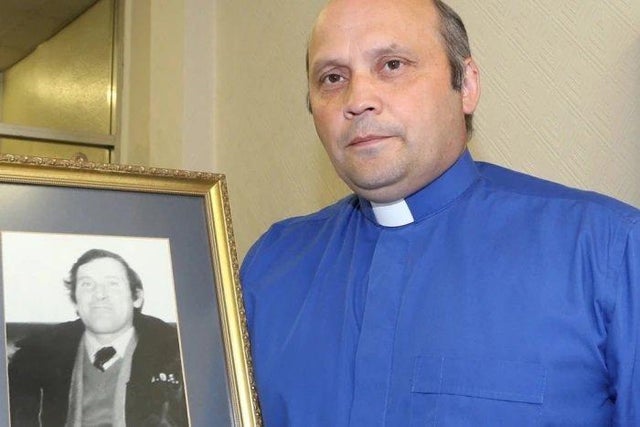 An Anglican cleric who was doubly bereaved by the IRA has described a sense of anger and betrayal after learning the Archbishop of Canterbury has hosted secret talks about handling unsolved Troubles murders, Adam Kula reported in the News Letter, on Tuesday 8, December 2020.

Church of Ireland Canon Alan Irwin spoke to the News Letter yesterday, after the hidden discussions in Lambeth Palace – one of the headquarters of the global Anglican communion – came to light last week.

The talks involved the PSNI, UK and Irish governments, and Sinn Fein – with unelected former IRA figure Spike Murray among those present.

There were no representatives from any of NI’s unionist parties; in fact, the parties said they were unaware such talks were even happening.

Likewise, some observers have been critical of the lack of representation of innocent Troubles victims at the talks.

Rev Irwin, who ministers in Lack, Co Fermanagh, told the News Letter he worries the archbishop (who is the de facto head of the entire worldwide Anglican communion) will “fall into the same snare as clerics here and actually turn aside from the Biblical model, set aside the Scriptures, in relation to justice, truth and forgiveness”.

His reaction to the news was “anger”, and he described the situation as “sickening”. 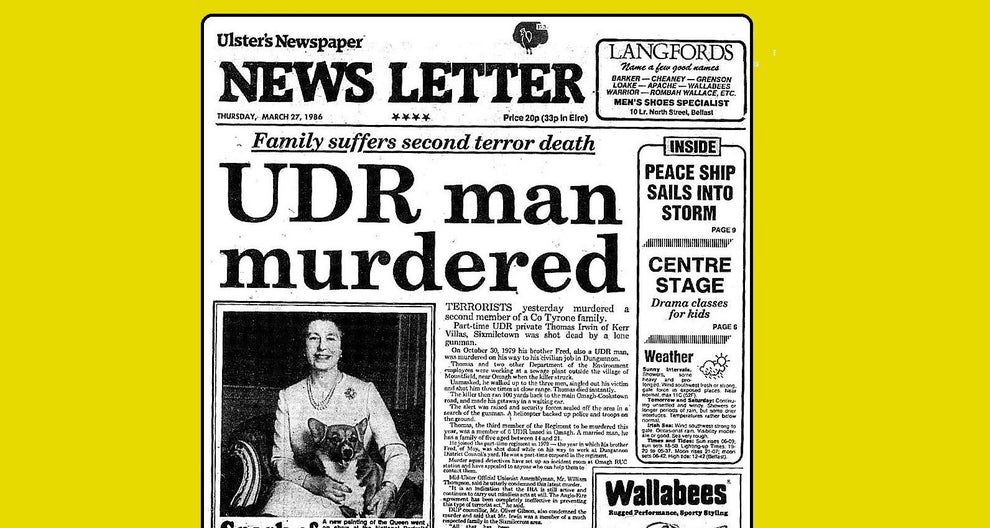 Photo above – The News Letter’s front page in 1986, announcing news of Thomas Irwin’s murder; the copy on the page included condemnation of the killing from the DUP, SDLP, and even the Workers’ Party (linked to the Official IRA)

“This is happening again, and innocent victims have been overlooked,” he said.

“Surely we’re the first port-of-call to be spoken to as to how we see it – at the end of the day, it’s affecting our lives.”

He believes that the archbishop is “being used”, and it amounts to a “bit of a betrayal to his flock and certainly to the innocent – no attempt has been made to engage with us”.

Rev Irwin worries that the talks represent an effort to “placate or appease” those involved in terrorism.

Specifically, he said that “there seems to be nothing there about acknowledgement of wrongdoing as a basis to start off with”, adding that not just “repentance” but “restitution” is required before true reconciliation can happen.

Some lay people he had spoken to were “disgusted”, saying “the church doesn’t seem to be in touch with the grassroots membership”.

Lastly, Rev Irwin thanked the News Letter, saying it is the “only voice” for innocent victims.

Some lay people he had spoken to were “disgusted” adding “the church doesn’t seem to be in touch with the grassroots membership”.

Lastly he thanked the News Letter, saying it is the “only voice” for innocent victims.

Mervyn Storey, former DUP social development minister (who is a Free Presbyterian) said: “I can’t speak for the Church of Ireland. But I’m certain it’ll raise concerns that there’s been this type of clandestine approach.

“There are many members of the CoI, particularly in border counties, who suffered at the hands of terrorism – and sadly many CoI churches were locations for the funerals of those who were the victims. I think if you asked those families about this process, I’m sure their answer would be much the same as mine.”

He said the news of the talks “smells like” the government trying to “circumnavigate the political process”.

He also voiced strong objection to the idea of “paying off paramilitaries” – including all those on the loyalist side.

The News Letter asked the Church of Ireland its response to news of the secret talks.

Participants of a legacy talks forum hosted by the Archbishop of Canterbury at Lambeth Palace were told to keep the meeting confidential, a whistleblower has said, Mark Edwards reports in the Belfast Telegraph –

Among those reported to have been involved were officials from the Northern Ireland Office, the Republic’s Department of Foreign Affairs, Sinn Fein strategist Sean Murray and loyalist Winston Irvine.

Senior British military officers, Queen’s University law lecturer Kieran McAvoy, former Victims’ Commissioner Judith Thompson and the PSNI were also invited. Victims’ groups have reacted angrily to reports of the meeting, saying that they were not asked to take part.

An unnamed source who was present at the talks told BBC Radio Ulster’s Nolan Show that participants were told not to disclose that the meetings had taken place.

The source said: “We were all meant to be confidential. If you got victims’ groups involved earlier on, that shuts one door. If you go down with politicians, another door shuts.”

However, the NIO denied the talks were secret.

It said: “The UK Government is listening to people from all communities, victims and survivors regarding legacy issues, and is committed with our Irish partners to seek a way forward for everyone.

“We are not engaged in ‘secret talks’ with anyone.” Kenny Donaldson of Innocent Victims United said it was “not a one-off” meeting.

“Meetings off this nature have been going on since February,” he added.

“Not a word of any of this was said by those individuals.

“So it was intended to be kept extremely quiet.”

Secretary of State Brandon Lewis has not confirmed if he was aware of the talks.
Former Victims’ Commissioner Mike Nesbitt, speaking to the Nolan Show, said:

“Victims keep hearing people talking about processes that will be victim-centred and that expression is often honoured in the breach.”

The Ulster Unionist MLA added: “Here is an example of a process that is not victim-centred because they are not even invited into the room.”