MEDIA – Will Biden shake up a century of US-Ireland relations? 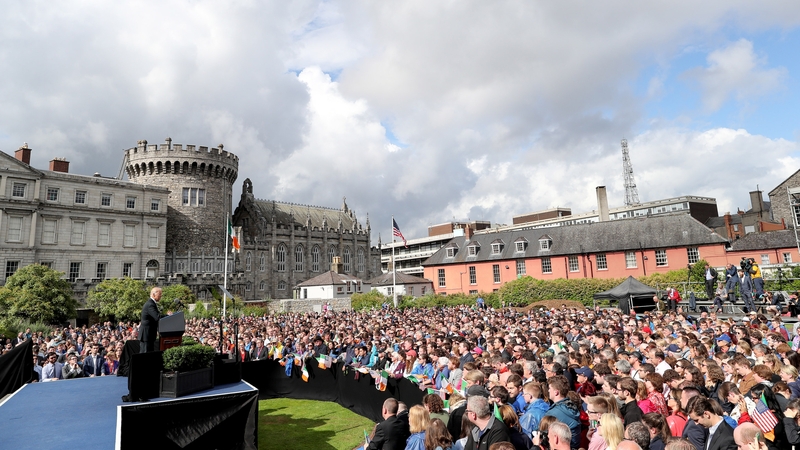 By Mark Holan – a journalist based in Washington, D.C. who researches and writes about Irish American history – writing in History News Network

Joe Biden makes no secret of his fondness for his Irish roots, whether liberally quoting Irish poets, personifying the Claddagh ring traits of friendship, loyalty, and love, or brushing off a BBC reporter by smiling, “I’m Irish.” His election may also be a boon to Irish politics, including new focus on the island’s century-old divided status — part of it an independent republic and part still belonging to Britain’s United Kingdom. Though annual St. Patrick’s Day festivities at the White House have become a familiar tradition, Ireland hasn’t always fared well with U.S. presidents.

A century ago, as Irish separatists waged a guerilla insurgency against British rule, they cited Woodrow Wilson’s World War I call for the self-determination of small nations. Wilson had Irish Protestant roots, but he grew agitated with Irish activists in America, who helped scuttle the post-war League of Nations with ally Britain late in his second term. Irish efforts to secure U.S. political recognition for their breakaway republic also faltered in Congress and failed to influence the 1920 Republican and Democratic party presidential nominating conventions.

In the weeks immediately after Warren G. Harding was elected, IRA operatives directed by Michael Collins assassinated 13 British Intelligence agents, followed by same-day military and police reprisal killings of 16 civilian spectators at a Gaelic football match at Dublin’s Croke Park, what became known as “Bloody Sunday.” In Washington during the interregnum, the American Commission on Conditions in Ireland opened sympathetic hearings at the Lafayette Hotel. More than 2,000 Irish sympathizers also marched past the lame duck Wilson’s White House “through a driving cold rain” to the city’s Center Market, “where they joined waiting thousands at the auditorium in a monster protest meeting against America’s silence on conditions in Ireland,” the Evening Star reported.

Once Harding took office in March 1921, he supported Irish humanitarian relief, but his administration took an arms-length approach to the war. That December, he endorsed the Anglo-Irish Treaty as the island was partitioned into the mostly Catholic south and the predominently Protestant north. Irish-American activism ebbed in Washington as Harding focused on domestic affairs and Ireland deteriorated into civil war.

In 1960, the historic election of Irish-American Catholic John F. Kennedy was “hailed as a victory for Irish blood and the old faith,” the Cork-based Irish Examiner editorialized. “Others saw in it the culmination of the battle for recognition of the descendants of this land, from the generation which took part in the great diaspora of our race after the famine years.”

In June 1963, Kennedy made a triumphal visit to Ireland, first by a U.S. president, as the country slowly emerged into the modern economic and social order. Kennedy described the stop as “the happiest days of my life.” But the affection for his ancestral homeland was only so deep. His father, Joseph P. Kennedy, had been U.S. Ambassador to the U.K. a generation earlier. In the middle of the Cold War, the president wasn’t about to jeopardize America’s “special relationship” with Britain.

Newly released Irish foreign policy documents from the period detail how Kennedy rebuffed efforts to publicly pressure London on partition, though as a senator he spoke on behalf of a united Ireland. “He is by education British inclined and in the present international conjuncture he makes no secret of his firm attachment to Britain,” Irish ambassador to Washington Thomas J. Kiernan reported back to Dublin after a St. Patrick’s Day 1963 meeting with the American president. “He would therefore regard our suggestion as embarrassing to the British.”

Trilateral U.S.-Irish-British relations would only grow trickier as sectarian strife between Northern Ireland’s Catholics and Protestants exploded in the late 1960s, “The Troubles,” which lasted three decades. The 1998 Good Friday Agreement, achieved with help from Bill Clinton and several members of Congress, ended most of the violence and allowed new economic and social connections to flourish between the two Irelands.

Today, there is new focus on the border between the Republic of Ireland and Northern Ireland, the only terrestrial touch point in the U.K.’s withdrawal from the European Union–Brexit. In tweets and other comments before and since his election, Biden has supported the Good Friday Agreement and opposed trade barriers and military-style checkpoints that could threaten the peace deal.

“We do not want a guarded border. We want to make sure – we’ve worked too long to get Ireland worked out,” he said Nov. 24. “The idea of having a border north and south once again being closed is just not right, we’ve just got to keep the border open.”

Nevertheless, Biden is expected to take a moderate approach with British Prime Minister Boris Johnson, the brash Brexiteer. Biden “will not hold a grudge” against Johnson’s association with Donald Trump or description of Barack Obama as “part-Kenyan,” and thus anti-British, said Thomas Wright, director of Brookings’ Center on the United States and Europe. In a Nov. 23 briefing for Irish Network-DC, a professional and social organization (disclosure, I’m a member), Wright also said Biden might get tough on Ireland when it comes to leveling the field on international tax issues.

Brexit and the centenary of partition have amplified chatter about a united Ireland. Sinn Fein politician John O’ Dowd cleverly tweeted “we have been Biden our time for such a president” as might support Irish reunification, but Irish Times columnist Stephen Collins wrote Biden “does not pander to cliched demands for a united Ireland parroted by some U.S. politicians.”

Biden brings a stronger Irish-American Catholic identity to the White House than Kennedy. Rather than being beholden to Rome, as many feared about Kennedy, Biden bucks the church on the U.S. Supreme Court’s abortion decision, issued a decade after Dallas. Biden is positioned to be much more sympathetic with the church hierarchy–and the Dublin government–on immigration issues.

Catholic identity has faded in Ireland since Kennedy’s visit. Clergy abuse scandals have deminished church attendence and nationwide referendums have approved abortion and same-sex marriage. Ireland is a young and progressive county bolstered by investment from the high-tech and pharmaceutical sectors; hardly the set pieces of “The Quiet Man” or even “Brooklyn.”

So brace for Biden to keep sprinkling his speeches with lines of Seamus Heaney and other Irish poets. Bank on him making an early presidential trip to his ancestral homeland of Ballina, Co. Mayo, once the COVID-19 crisis passes. And expect a little more serious business mixed with the usual goodwill and affection at the White House on St. Patrick’s Day.