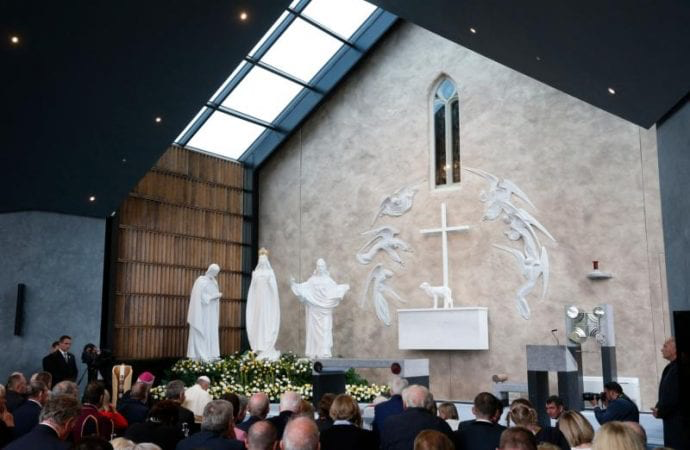 A woman healed at the Shrine of Our Lady of Knock in Ireland 30 years ago has been formally acknowledged by the Catholic Church as having no “medical explanation.”

Marion Carroll was brought to the shrine on a stretcher in 1989 suffering from the early stages of a condition thought to be Multiple Sclerosis.

Carrol said she pleaded with Mary for healing, and immediately her symptoms cease. She later wrote about her experience in the book, I Was Cured at Knock.

On Sunday, Archbishop Michael Neary of Tuam announced that the Church had confirmed the miracle during a pilgrimage to the Knock shrine attended by Carroll.

“Thirty years ago, on the occasion of this pilgrimage, Marion was healed here at Our Lady’s Shrine. Today the Church formally acknowledges that this healing does not admit of any medical explanation and joins in prayer, praise and thanksgiving to God,” the archbishop, who is also custodian of the shrine, said Sep. 1.

The head of the Medical Bureau at the Knock shrine, Dr. Diarmuid Murray, told RTÉ News that that it took 30 years to determine that there was no medical explanation for the cure because a formal diagnosis of her condition had not been made.

“In these situations, the Church must always be very cautious,” said Neary. “This is illustrated by the fact that thirty years have elapsed since this took place, during which time the examination by the Medical Bureau testifies that there is no medical explanation for this healing.”

Pope Francis visited the Knock shrine in 2018 when he visited Ireland. It was the second time a Roman pontiff has prayed where 15 people saw an apparition of Our Lady, Saint Joseph, and Saint John the Evangelist on Aug. 21, 1879. Pope St. John Paul II also visited Knock in 1979.

Bishop Francis Duffy of Ardagh & Clonmacnois, who is Carrol’s local bishop, led the Sep. 1 pilgrimage to the shrine.

“I recognize that Marion was healed from her long-standing illness while on pilgrimage in this sacred place,” Duffy said.

“Without doubt there was a healing, a cure of the illness that beset Marion for several years. Marion was liberated from sickness and its impact on her and on her family. It is also a healing for which there is no medical explanation at present, it is definite and yet defies medical explanation,” the bishop continued.

Duffy noted that many people come to Knock, and “many healings of body, mind and soul take place.”