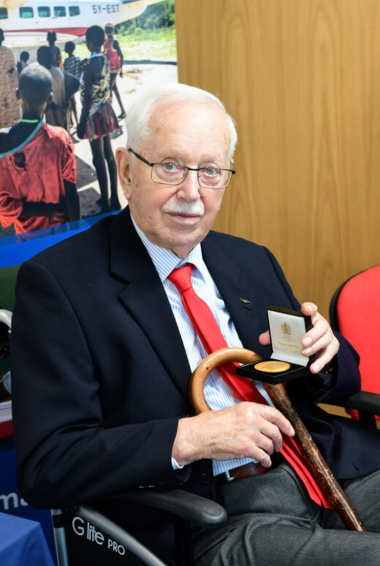 Stuart King, an RAF veteran and the co-founder of Mission Aviation Fellowship (MAF), has been recognised with a special award from the Honourable Company of Air Pilots (HCAP).

The 97-year-old former RAF flight lieutenant received the Award of Honour for his outstanding and enduring contribution to aviation, joining a distinguished list of recipients that includes the first man to walk on the moon, Neil Armstrong, and commander of Apollo 13, Jim Lovell.

It also recognises his pioneering work in helping to establish and expand MAF in the aftermath of World War Two.

Today, the Christian charity is the world’s largest humanitarian airline, flying people, supplies and equipment to many remote areas that cannot be reached because there are no roads or the roads have been destroyed as a result of conflict, disaster or environmental factors.

It operates 130 light aircraft in 27 developing countries and last year flew over 8 million miles, carried 157,000 passengers, moved over 6,000 tonnes of freight and supported over 2,000 organisations.

Mr King was joined by family, MAF colleagues and fellow MAF co-founder Jack Hemmings to receive his award at the charity’s UK headquarters in Folkestone on Monday.

“It is always humbling when we are acknowledged for using our God-given abilities, and receiving this award is a particularly great honour,” he said.

Paul Tacon, Clerk of HCAP, said, “Although Stuart is no longer conducting operations, his vision and integrity have created the ethos and professionalism that is MAF today.

“Stuart is an extraordinary and visionary man, who has done so much to enable aviation to bring help and relief to some many of the world’s most disadvantaged people. He is a worthy recipient of the Award of Honour for his outstanding and enduring contribution to aviation.”

He was put forward for the award by long-term MAF supporter and Wing Commander Mike Dudgeon, who noted Stuart’s resolve and steadfast Christian faith.

“If not for Stuart’s determination, thousands of people wouldn’t have been helped in some of the remotest places,” he said.

“It’s wonderful that Stuart’s vision and Christian values are still at the centre of what MAF do today. He is truly an inspirational man and it is a brilliant organisation.”

Mr King’s daughter Rebecca King, who grew up alongside her father’s pioneering operations in Sudan and Ethiopia, said he was an inspiration.

“Dad’s life motto was always to be the best man he could be in God in every season of his life,” she said.

“He strived to be the best bachelor, then the best husband, the best father and now the best widower. He has always been so determined and committed to MAF. He is an inspiration to us all.”