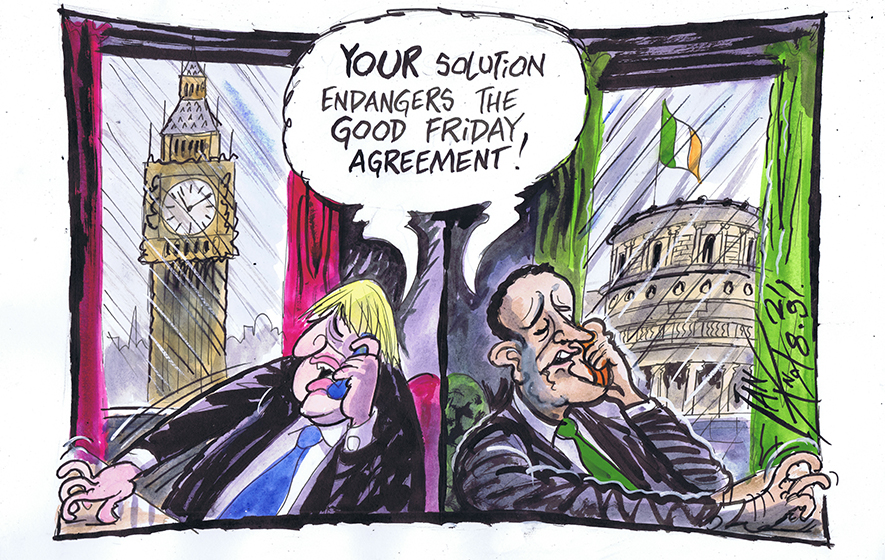 No NI border checks, UK Prime Minister
”Under no circumstances will the UK be putting in any kind of checks at the border in Northern Ireland,” says Boris Johnson
[https://www.telegraph.co.uk/politics/2019/08/20/european-union-not-uk-wants-put-irish-border-posts-brexit/. ]

Troubles trauma – the hidden legacy of violence
Thousands of people in Northern Ireland live with mental health after effects of decades of conflict.
[https://www.bbc.com/news/uk-northern-ireland-49357887]

Garda divisions to reduce from 28 to 19 under major shake-up of the force
The number of garda regions and divisions are set to be reduced while local units will be given more power as part of a major reform
[https://www.thejournal.ie/garda-structure-reform-4777193-Aug2019/]

‘God is a tourist attraction’ Anglican bishop says on cathedral carnival ride
Rt. Revd. Johnathan Meyrick, the Anglican bishop of Lynn, delivered a sermon midway down the helter-skelter slide during the final liturgy held in the cathedral with the ride present. “God is a tourist attraction,” Meyrick said, claiming that God would be “revelling” in the joy it brought to visitors. During the time the helter-skelter was installed, over 20,000 people came to visit the nearly thousand-year-old cathedral.
[https://catholicherald.co.uk/news/2019/08/21/god-is-a-tourist-attraction-anglican-bishop-says-on-cathedral-carnival-ride/]

Report of the independent report into safeguarding in the Diocese of Chichester
[https://www.bbc.co.uk/news/uk-england-sussex-49413546]

University chaplains say that students are going to chapels fuelled by an “academic” curiosity about faith
[https://www.thetimes.co.uk/article/why-curious-students-put-their-faith-in-chapel-visits-cxwshsc0d]