NIO Minister, Robin Walker MP – It was an honour to be at Enniskillen 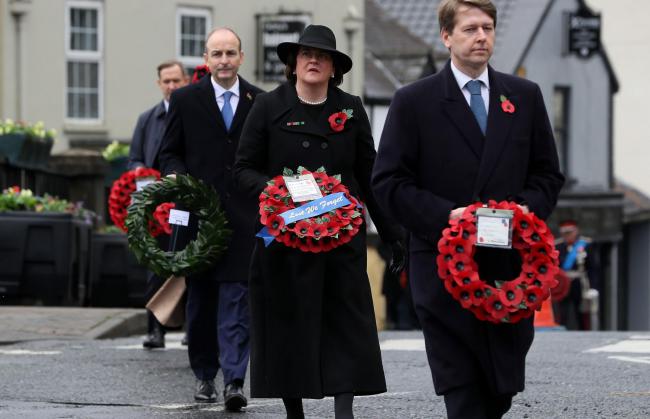 Michael Martin was the third Irish prime Minister to attend

Photo above – Northern Ireland First Minister Arlene Foster with Robin Walker MP (right), Minister of State at the Northern Ireland Office, and Taoiseach Micheal Martin during the Remembrance Sunday service at the Cenotaph in Enniskillen

On Sunday millions of people all over the country will have taken a moment in silent contemplation of the courage and sacrifice of previous generations and in remembrance of those who have served, Robin Walker MP writes.

From churches and cathedrals, village memorials, but mostly from home, people will have stood silently in tribute and paid their respects to the fallen.

Whilst the major public events had to be scaled back this year in recognition of the risk to public health of large gatherings during the current pandemic, the Royal British Legion did a brilliant job in organising safe socially distanced events all over the country and in ensuring that people could take part safely in these or tune into them from home.

It is terrible not be able to gather together in places of worship as we usually do and I missed the feeling of community that comes from playing my small part in the fantastic public gathering that we usually see outside Worcester Cathedral. I was glad that the cathedral were at least able to broadcast a service so that people across Worcester could take part in this.

Serving in the Northern Ireland Office I instead had the unique opportunity to take part in a very poignant ceremony at the Cenotaph in Enniskillen, 33 years to the day after an appalling IRA bomb killed 11 innocent people and injured many more at the Remembrance Sunday service in that same location.

It was a great honour to represent Her Majesty’s Government at such a solemn occasion and to stand alongside the First Minister of Northern Ireland and the Irish Prime Minister to lay a wreath.

It is a recognition of how far we have come in the generation since 1987 that Michael Martin was the third Irish prime Minister to attend this ceremony and the first from his party – Fianna Fail to take part in the Remembrance commemorations at all.

His own family history with relatives who fought against the British on his mother’s side of the family and a father and uncles who served in the British Army, is a reminder of the complex web of links between our countries.

One of his own uncles spent three years in Changi prison after the fall of Singapore and like many Irishmen, his family continued to serve under the Queen’s colours long after Ireland became a Republic.

The service at a small Church of Ireland cathedral of Saint Macartin was a powerful reminder both of the strong links that bind us together across the United Kingdom and the unbearable suffering that was caused by the violence so euphemistically recalled as “the troubles”.

Eleven years after that bomb the Belfast Agreement allowed the vast majority to lay aside the armed struggle and allowed different communities in Northern Ireland, the British and Irish Governments to start working together on a framework for long term peace.

Our commitment to that framework is essential and the work alongside the parties in Northern Ireland and the Irish government to maintain it is more important than ever.

Remembrance Day should always be a reminder of the debt we owe to our veterans and all those who served, but it is also a reminder of the value of peace and of the need to keep working to build and maintain it.