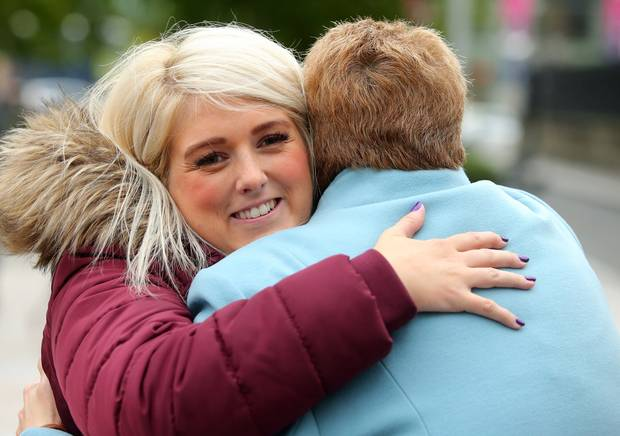 Photo above – Sarah Ewart (left), who took the case to the High Court and had to travel to England for an abortion six years ago due to a fatal foetal abnormality, is pictured outside the court with her mum Jane Christie.

Mrs Justice Keegan identified a breach in the prohibition on terminations in cases of fatal foetal abnormality (FFA).

She also held that a Belfast woman who was denied a lawful abortion in Northern Ireland of her unborn child with no chance of survival has the necessary standing as a victim to bring a challenge to the near-blanket ban.

The personal testimony provided by Sarah Ewart of the “horror” she endured six years ago was found to be “compelling”.

The judge said: “She has been affected by the current law in that she has had to travel to seek an abortion in desperate circumstances.

“In addition, she runs the risk of being directly affected again by the current legal impositions given that she is at risk of a baby having a fatal foetal abnormality.

“She has had to modify her behaviour in that she could not have medical treatment in Northern Ireland due to the risk of criminal prosecution.”

But with new legislation to decriminalise terminations in the region imminent – unless the Stomont Executive is restored by October 21 – Mrs Justice Keegan held off from making a formal declaration of incompatibility at this stage.

Unlike other parts of the UK, abortion is currently only legal within Northern Ireland to protect the woman’s life or if there is a serious risk to her well-being.

Outside court Mrs Ewart described the verdict as “a turning point for women in their campaign against the outdated laws prohibiting against abortion in Northern Ireland”.

It should never have had to come to this. Today’s ruling is a vindication of all those women who have fought tirelessly to ensure that we never again have to go through what I did in 2013.
Sarah Ewart

Grainne Teggart of Amnesty International, who supported the legal challenge, insisted: “This ground breaking ruling is a huge win for abortion rights in Northern Ireland.

“The court has spoken – the law is a clear violation of rights.

“Today’s ruling shows just how urgently change is needed so this healthcare can be accessed without having to travel.”

Solicitor Darragh Mackin, who represented Mrs Ewart, added: “This is a hugely significant ruling in our client’s campaign against the discriminatory and archaic laws that have denied the rights of many.

“We now look forward to an early hearing on the question of relief, so that this matter can be finalised once and for all.”

However, they still rejected the case mounted by the Northern Ireland Human Rights Commission because it did not have the necessary legal standing as a victim.

Mrs Ewart, 28, then mounted a challenge in her own name, as a woman directly affected by the current prohibitions.

Her lawyers relied heavily on the Supreme Court’s majority decision that the law is incompatible with Article 8 of the European Convention on Human Rights in FFA cases.

During the hearing the direct impact of the restrictions on Mrs Ewart was set out.

In an affidavit she described her “shock and horror at discovering that her foetus… had no skull or developed brain”.

The campaigner was at risk of infection if her unborn child died during pregnancy, but was still not eligible for an abortion under existing laws.

She was denied support and information because of the fear among health professionals that they could face prosecution, according to her lawyers.

Instead, Mrs Ewart travelled to a clinic in England in 2013 where the procedure was carried out.

The court was told she was left devastated by an experience described as “traumatic and undignified, like a conveyor belt, leaving her feeling vulnerable and humiliated”.

She was also given no information about whether she could obtain an autopsy, it was claimed.

During proceedings it was set out that only 13 lawful abortions were permitted in Northern Ireland last year, while 861 women travelled to England and Wales for terminations.

But Northern Ireland’s Attorney General, John Larkin QC, countered that Mrs Ewart does not have the necessary victim status.

He also argued that selecting unborn children for abortion due to their disability is prohibited by international treaty.

I intend to follow the ruling of the Supreme Court that the law in Northern Ireland is incompatible with human rights in cases of fatal foetal abnormality.
Mrs Justice Keegan

A further hearing to determine final relief in the case will take place at a late date.

“There is now an urgent need for reform of the legislation to provide the option of abortion where a woman’s life, health or mental health is at risk and in cases of fatal foetal abnormality and without specific indication for a limited gestational period so that cases of sexual crime can be dealt with in a compassionate manner,” she said.

The Green Party MLA Clare Bailey said: “Multiple Courts and Committees have set out that our abortion law breaches international human rights standards. The High Court has affirmed this once again.

“I would like to pay tribute to Sarah Ewart for her bravery in taking this action. I hope that no other woman has to force the government to live up to their human rights obligation in the same way ever again.

“I look forward to the process of abortion decriminalisation beginning on 21st October and the implementation of necessary healthcare provision for women at the soonest point possible.”

DUP MLA for Upper Bann Carla Lockhart said: “I recognise the tragic circumstances which led to today’s court case. As an elected representative, I am fully aware of the sensitivity around cases where an unborn baby is identified to have a life-limiting condition deemed fatal before, during or shortly after birth.

“During the debates at Westminster in July, the Democratic Unionist Party indicated we stand ready to consider law and policy around these cases in a re-constituted Northern Ireland Assembly.

“However, it is crucially important that we remember that the High Court judgement made today referred to a narrow set of circumstances.

“The judgement in no way found that there is a requirement under the European Convention of Human Rights to allow for abortion on request for any reason up to the point of viability.

“There is no human right to abortion on request.”