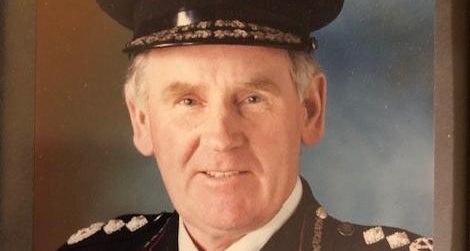 One of the most influential and widely admired senior police officers of the Troubles era has passed away in Co Down aged 92.

Michael McAtamney joined the Royal Ulster Constabulary in 1947 and would serve with distinction for 46 years before retiring as Deputy Chief Constable in 1993.

Despite leaving school aged 11 with no qualifications, the young police officer’s erudition and sound judgement inspired colleague Jack Hermon to embrace lifelong learning and to strive for promotion.

When Sir Jack was appointed chief constable in 1980, his chosen deputy was the then assistant chief constable whose unparalleled policing knowledge and calm manner proved invaluable as they navigated their way through some of the of the most difficult periods of the conflict – including Mr McAtamney’s investigation of what became known as the ‘shoot-to-kill’ controversy of 1982.

Born in Garvagh, Co Londonderry in 1928, into a family of small-time farmers who had no electricity or running water, it was a tough early upbringing at a time when being available for work was often deemed more important than attending school.

The educational hiatus was not to last and, while rising through the ranks RUC, Mr McAtamney would attain a number of academic goals, including gaining an LLB Honours degree.

He was widely regarded as a role model for young Catholic officers who came forward to join the RUC at the height of the Troubles.

His positive influence on Sir Jack Hermon began early in his policing career and the pair would ascend the ranks almost in tandem.

In his autobiography, Sir Jack commented: “Sergeant Michael McAtamney came with a reputation for a considerable knowledge of the law.

“He was to stimulate my thinking, broaden my reading, and sow the first serious seeds in my mind of aspiring to higher rank.”

Having been on the ground in Londonderry during the 1969 ‘Battle of the Bogside,’ the then Chief Superintendent McAtamney was appointed commander for the Newry area in 1970,

Recalling one example of the black humour necessary to stave off periods of despair in the early days of the Troubles, he occasionally spoke of the night in the Bogside when the poorly equipped, battered and exhausted police officers sang the Civil Rights anthem ‘We Shall Overcome’ to bemused rioters.

In his retirement, Mr McAtamney was also keen to reflect on days when Northern Ireland was pulled back from the brink of even greater turmoil – including a February 1972 powder keg Civil Rights march in Newry, just one week after Bloody Sunday.

The march had been banned by the Stormont government and C/Superintendent McAtamney was assigned the task of ensuring that no one on the police or military side of the stand-off did anything that would spark an all-out conflict.

His frontline leadership and attention to detail ensured the event passed off peacefully and further bloodshed averted.

Another notable success was his handling of the 1979 visit to the Republic of Ireland by Pope John Paul II. As assistant chief constable, Mr McAtamney worked closely with Ulsterbus boss Werner Heubeck to oversee the mass transport of hundred of thousands of northern Catholics across the border at a time when sectarian attacks were commonplace.

A keen student of Irish history, ACC McAtamney was conscious of the attacks that took place during the 1932 Eucharistic Congress and was successful in ensuring the RUC prevented any repeat.

Although he remained largely out of the public eye, the senior officer did not shy away from controversial decisions – including recommending that one of the officers involved in the 1982 series of fatal shootings in Co Armagh faced prosecution.

In 1986 when the IRA launched a series of attacks on rural police stations, the experienced commander quickly realised he was dealing with a campaign to drive the police out of rural areas – similar to the successful tactic of the 1920s IRA.

However, unlike the early part of the century, the availabilty of military helicopters meant the bases could be maintained without the need for vulnerable road transport.

DCC McAtamney issued a statement saying “the RUC would not be driven out” and that his officers would stand their ground.

Mr McAtamney was awarded the CBE in 1985 and enjoyed a long and happy retirement after standing down in 1993.

A keen gardener he devoted his remaining years to his family and many friends.

Mr McAtamney married Patricia O’Neill in 1963, who predeceased him in 2009, and is survived by two sons.