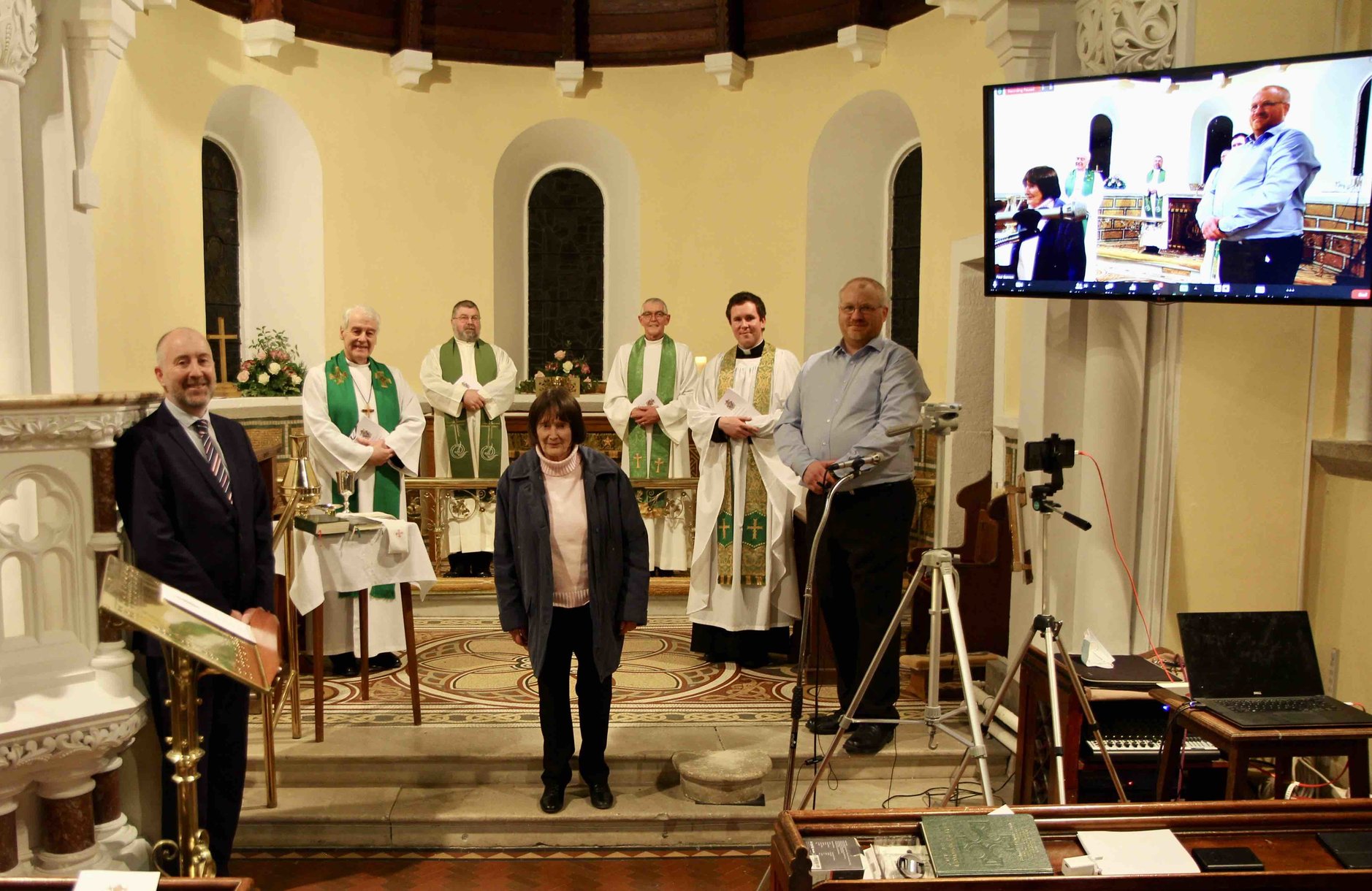 People from all over the island and beyond watched

Parishioners in Rathmichael Parish gathered around their computer screens, tablets and phones on Thursday night, November 19, to join the Service of Institution of their new Rector. The Revd Sean Hanily was instituted by Archbishop Michael Jackson as people from all over the island and beyond watched on Zoom and Facebook Live.

This was the first institution in Dublin & Glendalough since the start of the coronavirus crisis and the Archbishop thanked those who worked hard to make the service happen and ensure people could attend virtually. “We gather in small numbers but we are delighted that so many can join in different ways,” he commented adding: “We are delighted that Sean is coming to a diocese he knows and we welcome him back”.

The Archdeacon of Dublin, the Ven David Pierpoint, presented the new incumbent and the Archdeacon of Glendalough, the Ven Neal O’Raw, was in attendance along with churchwardens. Organist Valerie Lewis provided music at the beginning and the end.

The sermon too was beamed in from afar. The preacher was the Revd Kenneth Crawford of the Parish of St John the Baptist, Grainger Street, Newcastle–Upon–Tyne, a friend of Sean’s who makes ceremonial robes. He recalled an email from Sean in 2012 asking him to make a hood for his graduation from Trinity College Dublin. They corresponded for years and during that time he told Sean that he was also a priest in the Church of England.

In 2015 Sean wrote to him saying that he was drawn to holy orders and asking if he thought he should pursue it. The preacher advised him to go for it and test it out as otherwise he would also wonder. He was made a deacon in 2017 and the pair finally met, after six years of corresponding, in 2018. He attended Sean’s ordination to the priesthood in Derry in 2018 and Sean joined him in laying hands on Kenneth’s son in 2019 at his priesting in Durham Cathedral. They have walked a close spiritual journey together over the last 15 months.

The preacher, has been watching Sean’s online services from Omagh where he was Curate, and said the new Rector conducted the services with Integrity, sensitivity and a deep understanding of worship. He said that Sean would be a diligent priest who would pray and walk the journey of spirituality and faith with his parishioners with care, diligence and confidentiality.

He also shared an anecdote about Bishop Kenneth Kennedy who had been Bishop of Chota Nagpur in India but who retired early to the parish of Rathmichael. While there he gifted a baptismal font to another parish, the Parish of St Columba Omagh, where Sean was Curate. Sean’s son Marcus was baptised in that font. “I know this probably will be just coincidental. But it says to me that these are things that we hear about that are too coincidental to be coincidental. They remind us of the incredible unity of everything within the church nationwide and the world. It’s an incredible thing to think that this little boy was baptised in the font that was given by a bishop from Rathmichael,” he said.

The Revd Sean Hanily grew up in Roscommon and studied music at Trinity College Dublin, where he was also a choral scholar in the Chapel Choir. After leaving TCD he worked at St Patrick’s Cathedral for a number of years before beginning his training for ordination in 2015. He served his deacon year in Rathfarnham Parish and has been curate of Drumragh with Mountfield (Omagh) in the Diocese of Derry since 2018. He is married to Cherith and they have a one–year old son, Marcus.

You can view the service on the Rathmichael Parish Facebook page and a recording will be available on the parish YouTube channel in due course. 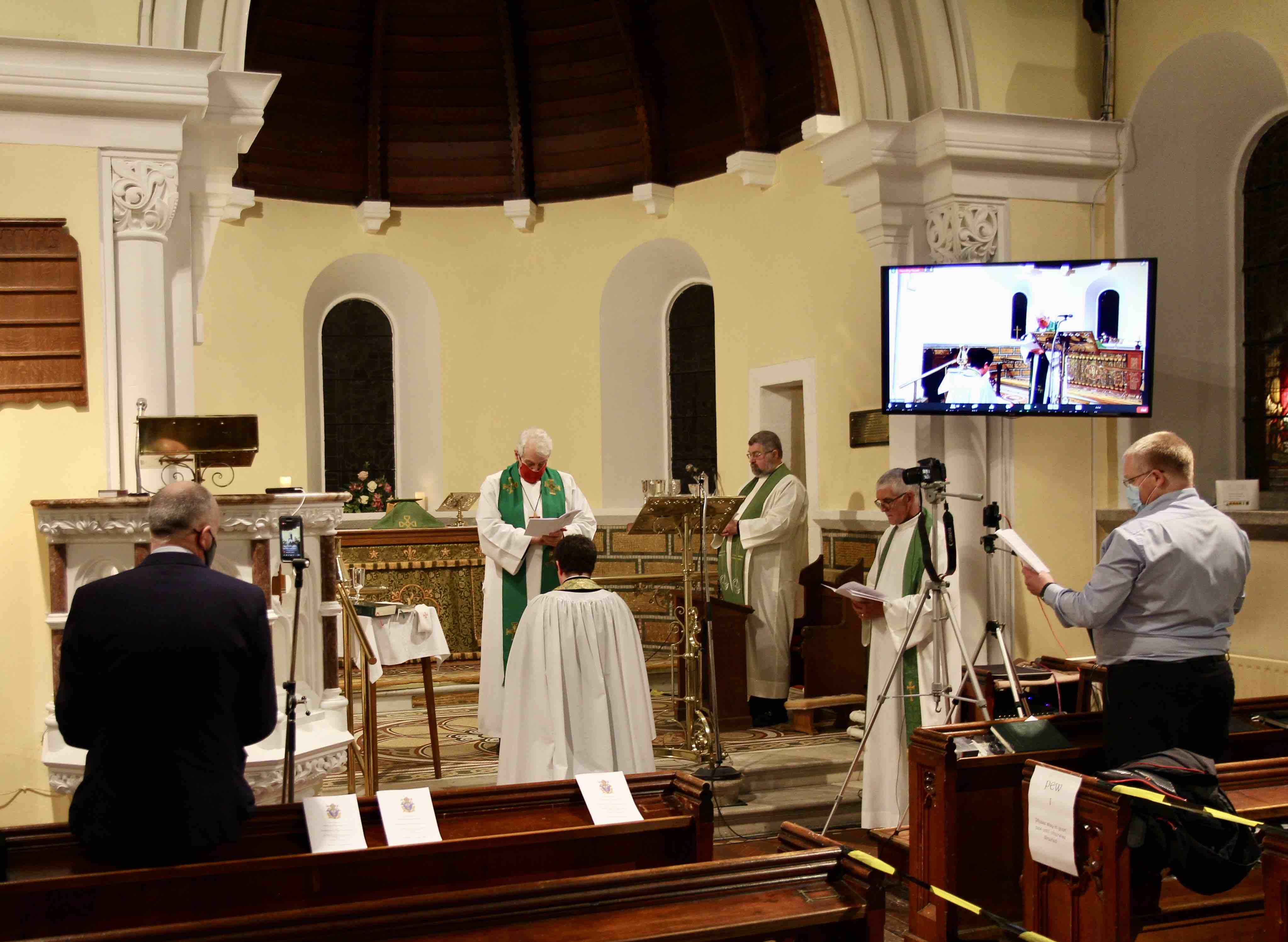