Pandemic in Ireland One Hundred Years Ago 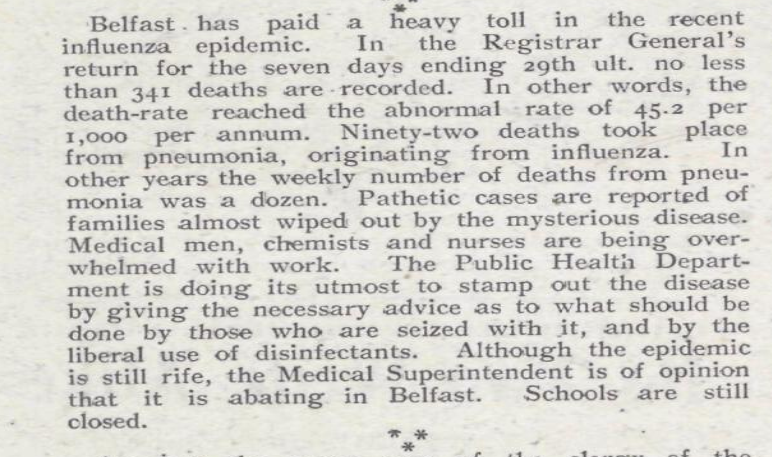 An archive through the Lens of the Church of Ireland Gazette

Photo above – Column from the Church of Ireland Gazette, 12 July 1918, as a sample of the early reporting on the influenza outbreak.

The Church of Ireland’s RCB Library has commissioned the historian and writer Dr Ida Milne to produce a timely analysis piece on the influenza of 1918-1919 as viewed through the lens of the Church of Ireland Gazette for July’s Archive of the Month.

Dr Milne is an expert on the impact of infectious diseases on Irish society over the course of the 20th century and her book Stacking the Coffins, Influenza, war and revolution in Ireland 1918-1919 (Manchester, Manchester University Press, 2018) is widely acclaimed, as is her recently co-edited (with Dr Ian d’Alton) collection of essays exploring identity, Protestant and Irish: The minority’s search for place in independent Ireland (Cork University Press, Cork, 2019). She has been in great demand in recent months as a commentator on the parallels and contrasts between the current Covid-19 pandemic situation and what Ireland experienced during the 15-month period between the spring of 1918 and early summer of 1919 in the flu pandemic widely known as the ‘Spanish flu’, another unusually deadly pandemic caused by the H1N1 virus.

In this illustrated online presentation, Dr Milne explores how the influenza was reported just over 100 years ago by the Church of Ireland Gazette. In the early summer of 1918, the editorials of the Gazette appeared far more concerned with matters political and military than religious. The hot debate in the 28th June 1918 edition, for example, was a speech during the week by Viceroy Sir John French, where he made it clear that while Lloyd George was abandoning Home Rule, conscription would press ahead if there were not 50,000 recruits to the hard-pressed army by October. The leader writer tied his colours to the mast by commenting that ‘we are not – we imagine after his recent gyrations on Irish policy few Irishmen are – among the whole hearted admirers of Mr Lloyd George’. In the background, behind the machinations of politics and the lumbering war, a darker force was beginning to emerge: the most extensive influenza pandemic in the modern world.

Elsewhere in the newspaper medical realities were beginning to dawn. On 12th July 1918, one columnist made the following stark observation: ‘Belfast has paid a heavy toll in the recent influenza epidemic. In the Registrar General’s return for the seven days ending 19th ult. no less than 341 deaths are recorded. In other words, the death-rate reached the abnormal rate of 45.2 per 1,000 per annum…’.

Written and read by lay and clerical members of the Church of Ireland and others, the Church of Ireland Gazette (published since 1856) provides the longest–running public commentary on Church of Ireland affairs, and as such recognised as a valuable primary source for understanding the complexities and nuance of Church of Ireland and indeed wider Protestant identity, as well as the Church’s contribution to political and cultural life throughout the island. The RCB Library is undertaking a sustained project to digitize the paper, and all editions up to and including 1949 are currently available and freely searchable online at this link: [ https://esearch.informa.ie/rcb ]

Later in 2020 the Library will be enabled to digitize the remaining decades from 1950 up to 2003 (when the Gazette became available in a digital format), and make a contribution to reconciliation by presenting each decade in the context of an online exhibition thanks to funding by the Irish Government’s Reconciliation Fund through the Department of Foreign Affairs and Defence.