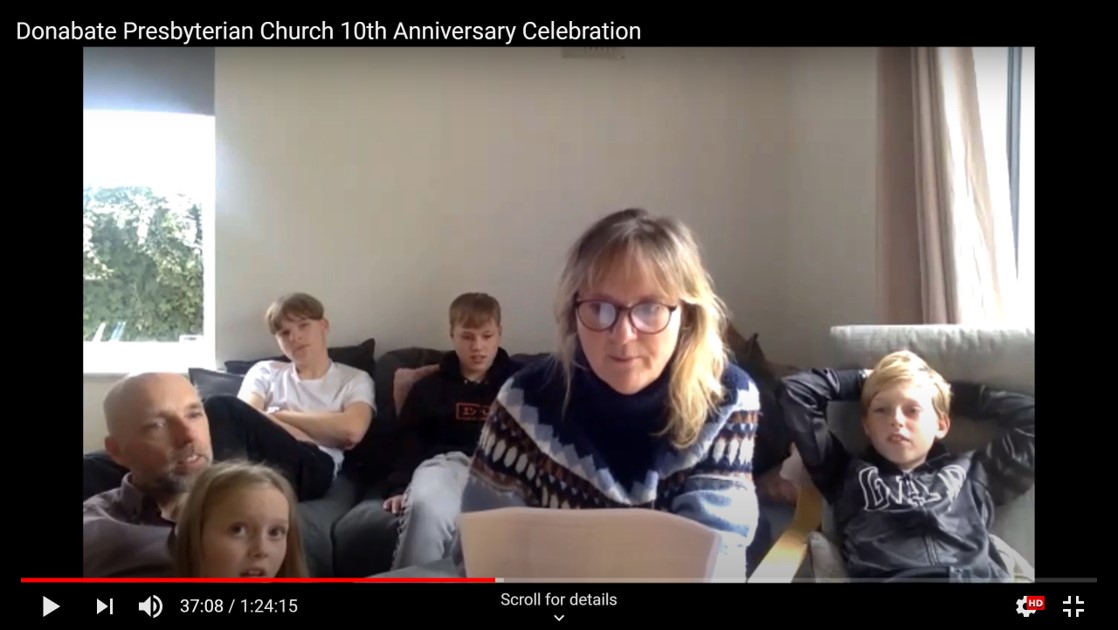 Virtual get-together including inputs from Cayman Islands and Australia

Photo above – Bláithín O’ Donnell, one of the first members of Donabate Presbyterian talks about her early involvement in the church

A community of 70 families, made up of around 200 people, would usually gather for worship upstairs in Donabate Portrane Community Centre. Given the current government restrictions, however, Sunday’s service of thanksgiving, like all recent services, was held via Zoom. Taking part from his County Antrim home, some 90 miles away, was PCI’s Moderator, Rt Rev Dr David Bruce. He took part in the service and also played a part in the church’s initial development.

“This isn’t quite what we had planned when we began to think of how we could celebrate our 10th birthday, but given all that has gone on this year, it was still an important moment for us in our journey together,” explained Donabate’s Dublin-born minister, Rev Andy Carroll. “We wanted to mark this milestone and give thanks to God for the last decade and what He has planned for the future.”

In a recorded message from Australia, Rev Dr Gary Millar, Principal of Queensland Theological College, who was the minister in Howth and Malahide from 2000 to 2012, talked about the early days. Current members of the County Dublin church talked about their involvement, while children in the Sunday school shared pictures of what church meant to them.

Andy Carroll continued, “Gary had the vision for Donabate initially and worked with me when I arrived. Things were getting a bit overcrowded in Malahide, as the congregation was experiencing a lot of growth in the early 2000s, which was great to see. Instead of looking to extend the church and build physically, after much thought and prayer it was decided to build in a very different way and start a new expression of God’s church in Donabate, where five of Malahide’s families were already travelling from each Sunday,” he explained.

“Each Sunday, when we met in the community centre, or now via our Zoom services, it is wonderful to see people that have become a community, many of whom had no relationship with any church, Presbyterian or other, or with God before. Ten years down the line gives you the perspective to see that unfolding journey we have taken together since that second Sunday in 2010, when we held our first service.”

Rev Carroll also said that it was a journey that was far from over. As the church continues to grow, they are looking to build a permanent home in the town. At the same time, Donabate members have begun to plant a new church in Balbriggan. “Malahide had a vision and a hope for Donabate and we are taking that same vision and hope10 or so miles up the road,” he said.

“As a plant of one church, outreach and mission are an intrinsic part of our DNA, so it was inevitable that we would do the same. The Good News of Jesus Christ is still changing lives and God is growing churches and meeting the great spiritual hunger that is out there, and that is something that we will also be celebrating on Sunday.”

As Moderator, Dr Bruce is the denomination’s principal public representative and as Secretary to PCI’s Council for Mission in Ireland, he is the first Moderator not to come from a parish ministry for over 20 years, although he served as a Dublin minister in the 1990s. One of the Council’s responsibilities is to support ‘Home Mission’ congregations and Donabate is one of 80 such congregations across Ireland. The Council also oversees church planting.

In his sermon, based on the Book of Exodus, chapter three, when God spoke to Moses through the burning bush, Dr Bruce talked about the burning bush as the emblem of Presbyterianism and about God’s promises – how He keeps them, even when it seems unlikely, or when faith runs a bit thin.

“This has been a tough year for everyone, with little good news to share, so when we have an opportunity to celebrate something good and full of hope for the future, it is a real blessing, Dr Bruce said.

“As one of my predecessors said a few years ago, the number we are celebrating isn’t really important – the 40th, 50th, or 400th anniversary of a church, even the 10th, however special. What really matters is that faithful Christian people saw a need and began something new. They preached the gospel, sowed the seed and above all else they were faithful – and for that we can always give thanks.

“I have been a small part of Donabate’s journey from the early days and it is a real honour to be asked to be part of today’s celebration. What many people may see as ‘against the odds’, our church, along with others, is growing in the greater Dublin area, which is so encouraging and another reason to celebrate.”

Dr Bruce concluded by saying, “Having been an outreach of Malahide Presbyterian, it is great to see Donabate growing and building a new worshiping community in Balbriggan. On behalf of our General Assembly, I would like to congratulate Donabate on their birthday and pray God’s richest blessing upon them and every encouragement for the future, especially during these unsettled times.”