Pope calls for day of prayer and fasting for Lebanon 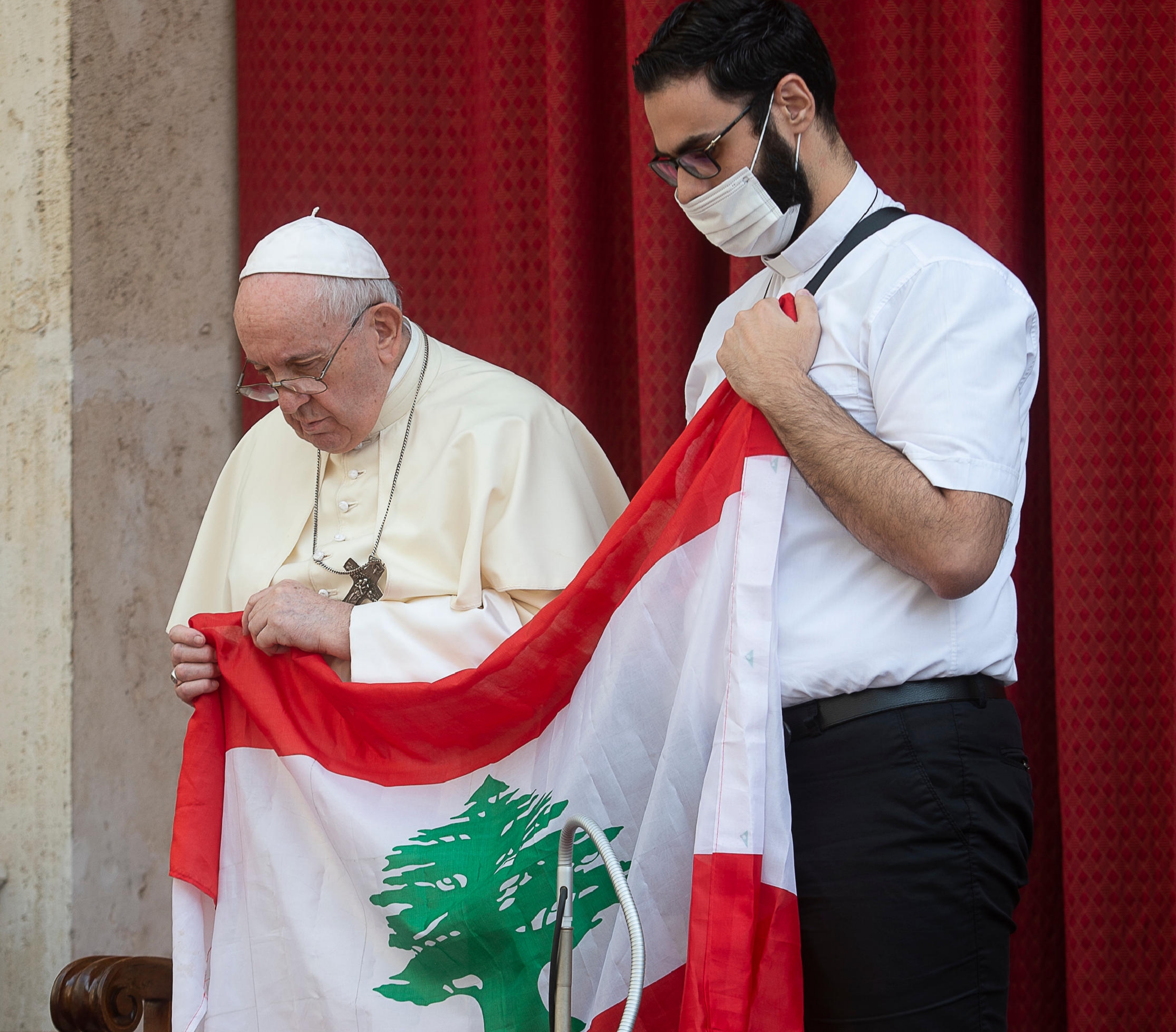 Lebanon is a message of liberty, an example of pluralism

Pope Francis has asked Catholics and all people of good will to observe September 4 as a day of prayer and fasting for Lebanon.

As Pope Francis greeted people gathered in the courtyard of the Apostolic Palace for his general audience on September 2, Fr Georges Briedi, a member of the Congregation of Lebanese Maronite Missionaries, held up a Lebanese flag.

The Pope kissed the flag and then bowed his head in prayer.

He had aides escort Fr Briedi to the front of the crowd and, at the end of the audience, he called the 35-year-old Lebanese priest up to stand alongside him. “Hold out the flag,” the Pope said.

Pope Francis reminded people gathered in the courtyard or watching on television that on August 4 a massive explosion at the port of Beirut killed at least 180 people, wounded 6,000 and displaced as many as 300,000 others from their homes.

It was a major blow to the people of Lebanon, who already were dealing with severe political and economic challenges.

Pope Francis quoted what St John Paul II had said of Lebanon some 30 years ago about “the extreme danger that threatens the very existence of the country. Lebanon cannot be abandoned in solitude.”

“For more than 100 years,” Pope Francis said, “Lebanon has been a country of hope. Even in the darkest periods of its history, the Lebanese people have maintained their faith in God and have shown the ability to make their country a place of tolerance, respect and coexistence — unique in the region.”

Lebanon is “more than a country: Lebanon is a message of liberty, an example of pluralism” for the Middle East and the rest of the world, Pope Francis said. “We cannot allow this patrimony to be lost.”

Pope Francis called on all Lebanese “to continue to hope and to find again the strength and energy needed to start over,” and he asked political and religious leaders to dedicate themselves to the common good, working with transparency and setting aside partisan interests.

In particular, he asked the people of Beirut to not abandon their homes, but to allow their faith to be their strength. “Do not let the dream of those who believed in the future of a beautiful and prosperous country slip away.”

“I renew my call to the international community to support the country so that it can come out of this serious crisis,” the Pope said.

Pope Francis also spoke directly to Catholic bishops and priests, asking for “apostolic zeal” in standing by their people and “poverty — no luxuries — poverty with your poor people who are suffering. Give them the example of poverty and humility.”

Encounter, dialogue and brotherhood are needed now more than ever, the Pope said.

The continued presence of Christians in Lebanon and throughout the Middle East can only succeed by seeking agreement and promoting mutual respect, he said.

“I invite everyone to join a universal day of prayer and fasting for Lebanon” on Sept. 4, he said, adding that he would send Cardinal Pietro Parolin, Vatican secretary of state, to Beirut on the occasion “to express my closeness and solidarity.”

The pope prayed that Our Lady of Harissa would “sustain those who mourn their loved ones and give courage to all those who have lost their homes,” and he prayed that “the Land of the Cedars would re-flower and spread the perfume of coexistence throughout the Middle East.”

After Pope Francis asked everyone to stand and pray silently for Lebanon, Father Briedi came to the microphone.

“We really need your support and the support of the universal church,” the priest said, adding that thousands of Christians are applying for permits to leave the country.