Pope Francis opens Synod of Bishops for the Amazon 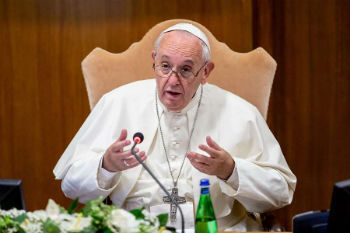 Pope Francis opened the Synod of Bishops for the Amazon with Mass at the Vatican, on Sunday. The synod is expected to cover environmental issues as well as the shortage of priests in the region.

The Amazon is the world’s largest tropical rainforest, and most of the territory is so rugged, overgrown, and remote, it can only be navigated by river. The basin is home to an unknown population of indigenous people, many thousands of whom are considered “uncontacted.” Uncontacted people are those who have no contact with the outside world. They possess mostly stone-age technology and lack resistance to common human diseases.

Conversely, populations of contacted indigenous people do communicate with the outside world on a limited basis, and the majority of those people are Roman Catholic. The nature of the terrain can be such that priests can only reach many communities with hardship, traveling on circuits from place to place to administer the Sacraments. There is a shortage of priests in this region, something Pope Francis wants to discuss with the bishops.

The media has suggested the Church “may allow” married men to become priests. The reports insinuate that married priests could become a new normal in time, with the added possibility that women could also become priests. However, these claims are sensationalist and stem from a lack of understanding.

The Church already permits married men to become priests under some circumstances. Married Episcopal priests who have become Catholic are one such instance. The Church is also well-served by deacons who fill some of the roles performed by priests. Deacons are helpers, who assist priests and may administer some Sacraments. Deacons are often married. Lay ministers, including women, often distribute Communion.

There is a unique role for women in the Church. In the Amazon, some of their responsibilities may be expanded due to critical need. However, there is no expectation that women will become ordained priests. All Catholics are called to priesthood, as members of the Church, but this call is unique and distinct from ordained priesthood.

In the event the Church does permit some married men to serve as priests in the Amazon, it should not be taken as part of a movement to liberalize the Church. The issues confronting the Amazon are related to culture and geography, and exist only in that place. This is why Pope Francis has called a synod which is specific to that region.

In addition to the topic of priests, the environment is expected to be a major topic. Pope Francis has built upon the work of previous pontiffs, including Pope Benedict XVI, in calling for a properly ordered relationship with the environment.

We are stewards of creation, and we are obligated to care for it. We must manage the wealth and resources of the Earth for the benefit of humanity and the well-being of the planet, and not with the mere aim of extracting wealth for a small handful of persons.

The Brazilian government has been under scrutiny this year following larger-than-normal fires and an opening of pristine lands to development. Both of these conditions have jeopardized the lives and livelihoods of indigenous peoples.

The synod will run through October 27, and at this time, it is unclear what its impact will be.