Pope Francis says gossip is ‘a plague worse than Covid’ 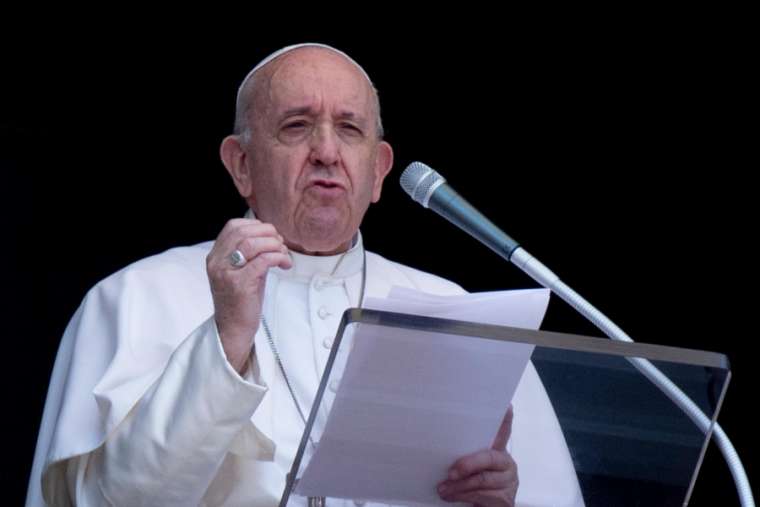 Pontiff urges faithful not to air grievances in public

Straying from his prepared weekly blessing, Pope Francis said on Sunday that gossip is a “plague worse than Covid” that is seeking to divide the Roman Catholic church.

Francis strayed from his prepared text in his weekly blessing to reiterate his frequent complaint about gossiping within church communities and the Vatican bureaucracy.

Without giving specifics, he went on at some length to say the devil is the “biggest gossiper” who is seeking to divide the church with his lies.

“Please brothers and sisters, let’s try to not gossip,” he said. “Gossip is a plague worse than Covid. Worse. Let’s make a big effort: no gossiping!”

Francis’s comments came as he elaborated on a gospel passage about the need to correct others privately when they do something wrong. The Catholic hierarchy has long relied on this “fraternal correction” among priests and bishops to correct them when they err without airing problems in public.

Survivors of sexual abuse have said this form of private reprimand has allowed abuse to fester in the church and let both predator priests and superiors who covered up for them escape punishment.

Pope Francis implored Catholics Sunday not to gossip about one another’s faults, but instead to follow Jesus’ directive on fraternal correction in the Gospel of Matthew.

“When we see a mistake, a defect, a slip of a brother or sister, usually the first thing we do is go and tell others about it, to gossip. And gossip closes the heart of the community, disrupts the unity of the Church,” Pope Francis said in his Angelus address Sept. 6.

“The great talker is the devil, who always goes about saying the bad things of others, because he is the liar who tries to disunite the Church, alienating brothers and sisters and unmaking community. Please, brothers and sisters, let’s make an effort not to gossip. Gossiping is a plague worse than COVID,” he told pilgrims gathered in St. Peter’s Square.

Pope Francis said that Catholics need to live out Jesus’ “pedagogy of rehabilitation” — described in chapter 18 of the Gospel of Matthew — “if your brother sins against you”.

He explained: “To correct a brother who has done wrong, Jesus suggests a pedagogy for rehabilitation … articulated in three steps. In the first place he says: ‘point out the fault when the two of you are alone’, that is, do not air his sin in public. It is about going to your brother with discretion, not to judge him but to help him realize what he has done.”

“How many times have we had this experience: someone comes and tells us: ‘But, listen, you are wrong in this. You should change a little in this.’ Perhaps at first we get angry, but then we are grateful because it is a gesture of brotherhood, of communion, of help, of recovery,” the pope said.

Acknowledging that at times this private disclosure of another’s fault may not be received well, Pope Francis pointed out that the Gospel says not to give up but to seek the support of another person.

“Jesus says: ‘If he does not listen, take one or two others along with you, that every word may be confirmed by the evidence of two or three witnesses,’” the pope said.

“This is the attitude of recovery that Jesus wants from us,” he added.

The third step of Jesus’ pedagogy of rehabilitation is to tell the community, that is the Church, Francis said. “In some situations the whole community gets involved.”

“Jesus’ pedagogy is always a pedagogy of rehabilitation; He always tries to recover, to save,” the pope said.

Pope Francis explained that Jesus expanded upon existing Mosaic law in going on to explain that community intervention may be insufficient. “It takes a greater love to rehabilitate a brother,” he said.

“Jesus says: ‘And if he refuses to listen even to the church, let him be to you as a Gentile and a tax collector.’ This expression, seemingly so scornful, in reality invites us to put the brother in God’s hands: Only the Father will be able to show a greater love than that of all brothers and sisters put together … It is the love of Jesus, who had embraced the tax collectors and Gentiles, scandalizing the conformists of the time.”

This is also a recognition that after our human attempts may fail, we can still entrust our brother who is in error to God “in silence and prayer,” he added.

“Only by being alone before God can the brother face his own conscience and responsibility for his actions,” he said. “If things don’t go right, prayer and silence for the brother and sister who is wrong, but never gossip.”

After praying the Angelus, Pope Francis greeted pilgrims gathered in St. Peter’s Square, including the newly arrived American seminarians living at the Pontifical North American College in Rome and women with multiple sclerosis who completed a walking pilgrimage from Siena to Rome along the Via Francigena.

“May the Virgin Mary help us to make fraternal correction a healthy practice, so that in our communities ever new fraternal relationships, founded on mutual forgiveness and above all on the invincible power of God’s mercy, may be instilled,” Pope Francis said.