Pope in Thailand: Encounter and mutual dialogue needed in a challenging world 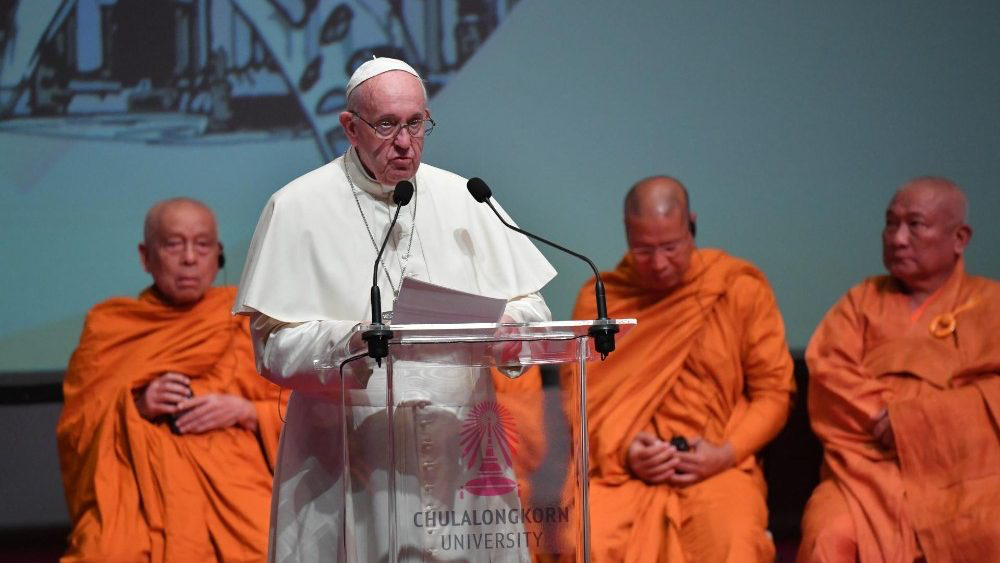 Photo – Pope Francis meets Christian leaders and leaders of other religions at Bangkok’s Chulalongkorn University, telling them co-operation and mutual respect are needed more than ever in a world filled with complex challenges.

In 1897, Thailand’s King Chulalongkorn (Rama V) visited Rome and met Pope Leo XIII, the first time that a non-Christian Head of State was received in the Vatican.

King Chulalongkorn’s vision, according to the University’s incumbent President, was to “provide higher education for students from all walks of life regardless of their gender, social status, ethnic or economic background, or religious faith”, and on that premise the university that bears his name was founded in 1917.

Addressing Christian Leaders and Leaders of Other Religions at Chulalongkorn University on Friday, Pope Francis said that this significant encounter between the monarch and Pope Leo challenges us, in our own time, “to pursue the path of dialogue and mutual understanding.”

We need to do it, he added, “in a spirit of fraternal solidarity that can help end the many present-day forms of slavery, especially the scourge of human trafficking.”

Pope Francis said, in a world today that faces complex challenges “such as economic and financial globalization and the tragic persistence of civil conflicts resulting in movements of migration, refugees, famine and war”, there is all the more need for mutual respect, esteem and cooperation between religions.

These challenges, the Pope pointed out, “remind us that no region or sector of the human family can look to itself or its future in isolation from or immune to others.” He continued by saying that, “now is the time to be bold and envision the logic of encounter and mutual dialogue as the path, common cooperation as the code of conduct, and reciprocal knowledge as a method and standard.”

Heeding the cry of the poor

Speaking to those present, the Pontiff said, “all of us are called not only to heed the voice of the poor in our midst: the disenfranchised, the downtrodden, the indigenous peoples and religious minorities, but also to be unafraid to create opportunities”, while respecting the rights of conscience and religious freedom.

During his address, the Pope noted in particular the “esteem and concern given to the elderly in Thailand. He said that, “this ensures that you preserve the roots necessary so that your people do not lose their bearings by following certain slogans that end up emptying and mortgaging the soul of new generations.”

Pope Francis expressed the hope that young people would continue to be assisted in discovering the cultural heritage of the society in which they live and the richness of its past.

This entire approach, the Pope underlined, “demands the involvement of educational institutions like this university.” Research and knowledge, he said, “can help to open new paths for reducing human inequality, strengthening social justice, upholding human dignity, seeking means for the peaceful resolution of conflicts, and preserving the life-giving resources of our earth.”