Pope to school children: “I can” must become “we can together” 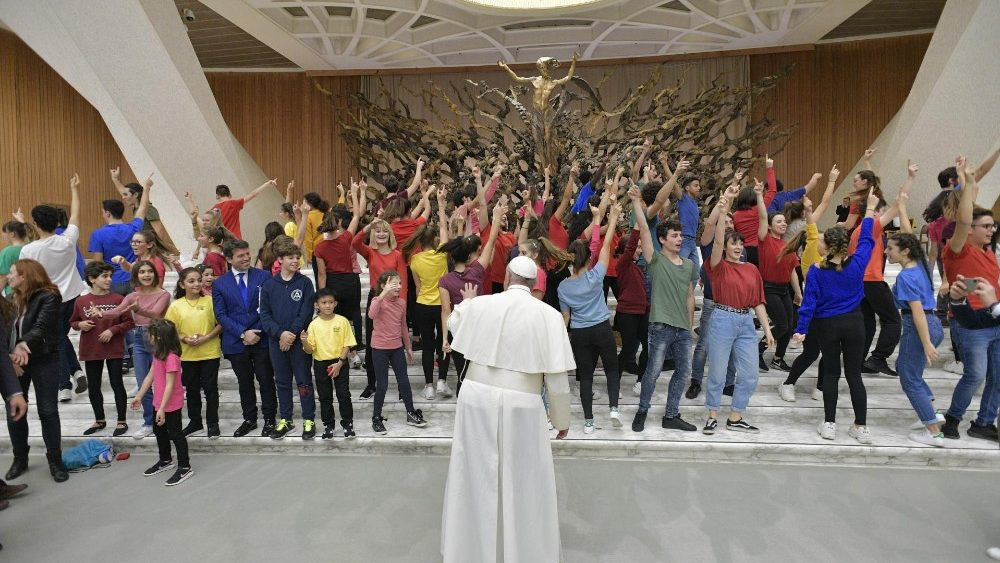 Photo – Pope Francis meeting participants in the “I Can” Children’s Global Summit.

Pope Francis on Saturday met some 3,500 school boys and girls, aged 6-16, along with their parents and teachers, who participated in the “I Can” Children’s Global Summit in Rome.

The November 26-30 Children’s Global Summit, celebrating “I Can”, is the largest all-faith, international gathering of children coming from over 40 countries. Promoted by FIDAE, the association of Italian Catholic schools, the “I Can” project is inspired by the Encyclical of Pope Francis, “Laudato Sì”. The initiative experiments with the adoption of the student-centred so-called “design for change ” approach.

Speaking to the children and adults, the Pope said that God made the work of His creation available to human beings to cultivate and guard it, so human beings find their full realization by giving life to a “shared beauty” in the service of others.

The Pope said that creation amazes us with its splendour and variety and makes us understand our role in the world. Sacred Scripture points to a very close relationship between the beautiful and good, between beauty and goodness, understood as service to others. Just as God has made the work of His creation available to human beings, so human beings themselves find their full realization by giving life to a “shared beauty”.

Urging them to recognize the intention of the Creator that is written in the beauty of creation, the Pope told them to watch out against trying to replace God’s unrepeatable and non-recoverable beauty with something created by us.

He said, like Prometheus of the Greek mythology, we too could be tempted to replace God, without realizing it. This happens when our “I” becomes the centre of everything and everyone, the Pope said.

In this regard, the Pope appreciated the children’s “I Can” project that “rightly says that we cannot be ourselves without the other and without others”. He urged them to avoid the trap of exclusivity. “You have understood that ‘I can’ must become ‘we can together’,” the Pope told them, adding, “together it is more beautiful and more effective!”

Children together with teachers, the Pope said, are called to build a “global village of education”, where there is a “network of human relationships, which are the best medicine against all forms of discrimination, violence and bullying”. “In this great village, education becomes the bearer of fraternity and the creator of peace between all the peoples of the human family, and also of dialogue between their religions.”

Pope Francis also thanked the parents for their contribution and patient support to the educational project through a beautiful balance between curiosity and novelty. Adults, he said, can learn from young people who are at the forefront of nature conservation.
Involving head, hands and heart

Pope Francis appreciated the children for their trust and courage in helping realize their project for environmental and social improvement; for keeping aside their mobile phones and serving the community; and for putting their mobile phones at the service of their commitment.

“You children,” the Pope said, “have shown that artificial intelligence alone cannot provide the human warmth we all need.” They preferred solidarity, common work and responsibility to so many other things. This, the Pope said is the fruit of an educational method that involves the head, hands and heart.